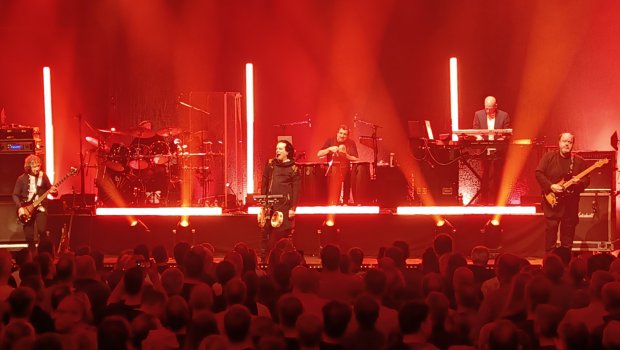 I love seeing bands outside the UK, it’s usually a very different experience, and a smashing Christmas pres from a wonderful wife has led us to Eindhoven for Marillion’s second night in this city in the south of the Netherlands near the German border, finally happening after being rescheduled from last October.

For this trip the eyebrow raising started early on, after we joined the queue outside the venue. With the entrance inside a shopping centre, the queue snaked from the doors around seats and plant features. Several hundred strong by the time we arrived, we happened to be near the door as we joined the end of the queue as it coiled around the tight space. Everyone waited patiently in their place – until the doors opened, upon which everyone piled towards them! I had to laugh but, when in Rome, it seemed rude not to follow the throng wedging through the entrance.

Once inside, it’s a lovely modern venue, and as we fancied a seat in the unreserved space we headed into the auditorium, snagging a nice spot and settling in as the floor in front of the stage filled. The second eyebrow raising occurred upon my much better half attempting to buy a couple of drinks. A bizarre token system was in play, leading to a seemingly volatile pricing structure, and she returned with a bemused look on her face in addition to the small beer and thimble-full of wine that had set her back far more than expected! Casting an eye around the room, it was surprising that hardly anyone had a drink – not the norm this side of Het Kanaal! Also, barely a soul needed to squeeze down the row to gather further refreshment during the show. It appears that inflated cost and an arse-achingly obtuse process had clearly done its work in reducing alcoholic desires…

Everything else, however, went swimmingly, starting with support act June Road, a recently formed duo – who actually met on Marillion’s 2019 ‘With Friends from the Orchestra’ tour: guitarist Harry Pane was the support act and violinist Maia Frankowski was one of the orchestral friends. Having got together as a couple, they pooled their skills to form June Road, based in Belgium, and with both singing, they played a quite lovely set. The vocal blend worked very well and the violin adds an extra dimension with Harry’s guitar. Both are strong singers and have a natural charisma that carries them through, easily winning over the receptive audience, particularly with a stirring version of Fleetwood Mac’s Looking Out for Love. Yes, there was a lot of chat in the quiet bits, but it didn’t phase them and they received well-deserved hearty applause at the end. 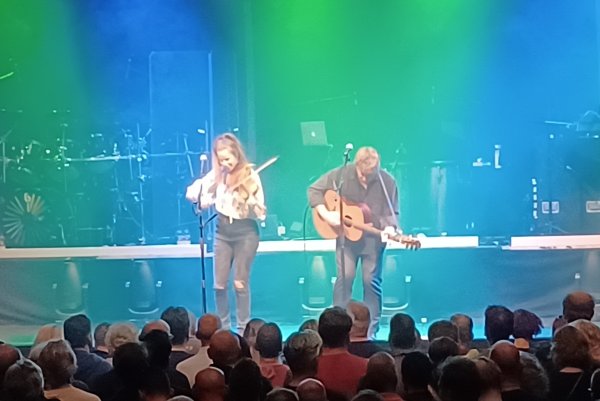 I’ve probably seen Marillion more than any other band over nearly 40 years, having first seen them in early 1984 on the Fugazi tour. Yes, I feel very old, but the band still retain that spark and energy that made them such a draw in the early days. In other ways a very different beast now, it has been fascinating to watch them evolve over such a long period. That said, the original DNA still flows through the music, and they allow it to seep through into the modern material, although with more subtlety than might be expected by those who think Fish is still in the band and they’re going to hear all the stuff they loved in the ’80s.

As the band arrive on stage, there’s another difference for this tour. Between Ian Mosley’s drum kit and the riser holding Mark Kelly’s keyboard rig sits Portuguese percussion legend Luis Jardim. Look up his credits on Wikipedia – you’ll have heard him before. A lot. It’s clear that Luis and the band have developed a deep bond and his contributions, though subtle, add considerable depth throughout, also freeing singer Steve Hogarth from his previous infrequent sojourns to the percussion cupboard. 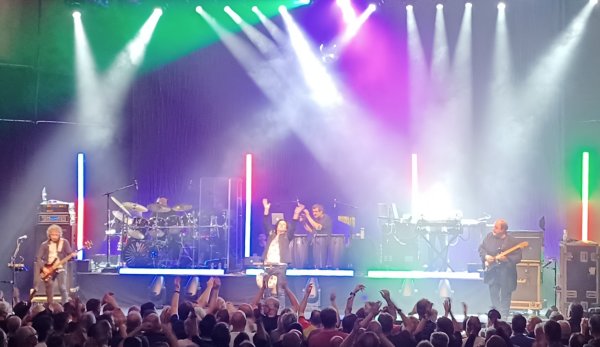 Suitably tooled up, Marillion once again prove that theirs is nothing of a nostalgia show by playing the whole of their latest album, the very good indeed An Hour Before It’s Dark. I’ve very much enjoyed this album but hearing it played live really brought out the detail, accentuated by Hogarth’s explanation for how most of the songs came about. After settling in with Be Hard on Yourself, Reprogram the Gene came across very well, but it was The Crow and the Nightingale that brought the first real rush of wonderment. Coupled with Hogarth’s introduction concerning the influence of Leonard Cohen, it shone anew amid a majestic performance from a well-oiled band at peak fitness. 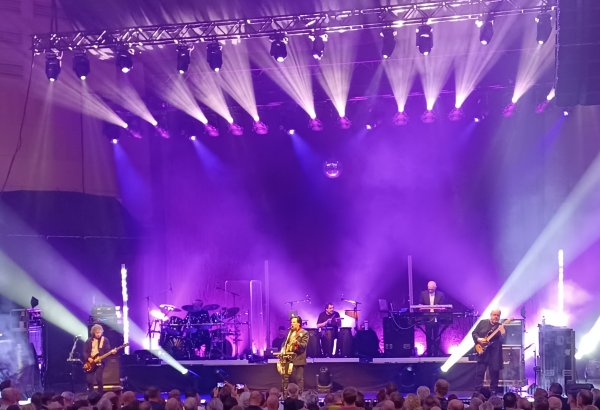 Speaking of well-oiled, Mr Hogarth has always been good value as master of ceremonies – and so he was tonight – but to me he seemed slightly more disjointed in the first half than I’ve seen him previously. From this I mused that he might have unlocked the secrets of how to get the best out of the freaky bar set-up…

Another suite that came across more vividly than on the recording was Sierra Leone. It has always somewhat passed me by previously, but the live version was thoroughly engaging and often gripping. The pièce de résistance of this album performance, however, was Care. Absolutely wonderful, dripping with emotion, and it was not a huge surprise when Hogarth commented that it was probably their best performance of it to date.

After very successfully concluding the new, it was back to past gems, starting with an impressive version of Estonia, one of my favourites and another highly emotional tour de force. 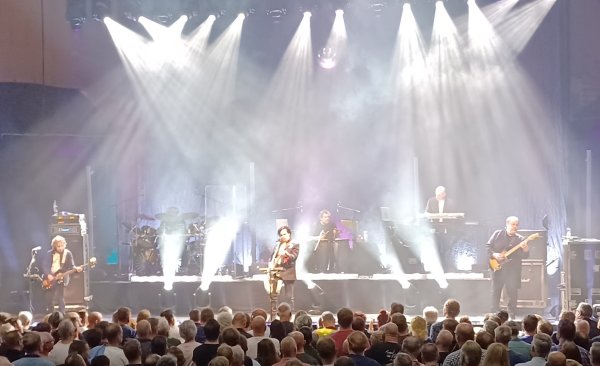 It’s at this point that the setlist deviated from the previous night, and in order to please the hardcore two-nighters they swapped out Somewhere Else in favour of Quartz, from the far too often overlooked Anoraknophobia album. It’s a song that I’ve always enjoyed, so this was a good thing from my perspective. Another fine version, they followed it up with a brace from Brave, Mad and Wave bringing an additional atmospheric depth before a resonant Afraid of Sunlight brought the main set to a memorable close.

Throughout the set, supported by an excellent light show, the band were in fine form and Hogarth in superb voice (backed by an animated Pete Trewavas), but for me the star of the show was – as so often – guitarist Steve Rothery. He has always been a picture of grace when wheeling out his mightily emotional solos, but there were moments this evening where he was just transcendent. An absolute pleasure to hear him play. 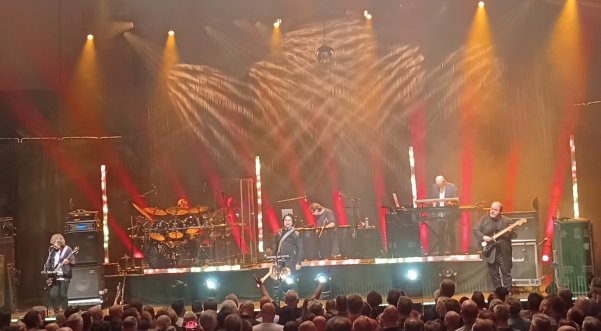 With the crowd going mental, an encore was obviously going to happen, and the band returned to deploy another unexpected and seldom heard Anoraknophobia delight, When I Meet God working beautifully. Following this, a fantastic take on The Great Escape to bring things to an epic conclusion. The night before this was the final song of the main set, but it worked equally well as part of the encore, which the previous night had comprised four parts of The New Kings.

With enthusiastic encouragement, Marillion were coaxed back for a final song and a resounding Garden Party raised the roof, with full-throated support from the Dutch faithful. Sugar Mice had closed the show the night before and it’s great that the band can dip right back into the depths of their repertoire and reveal guaranteed crowd pleasers without a hint of pandering to their past. Hogarth delivers the words like he was born to them, and although Marillion is indeed different now, it is very much built of the same stuff.

A wonderful evening with a wonderful band that continues to deliver and shows no desire to hit the nostalgia trail. 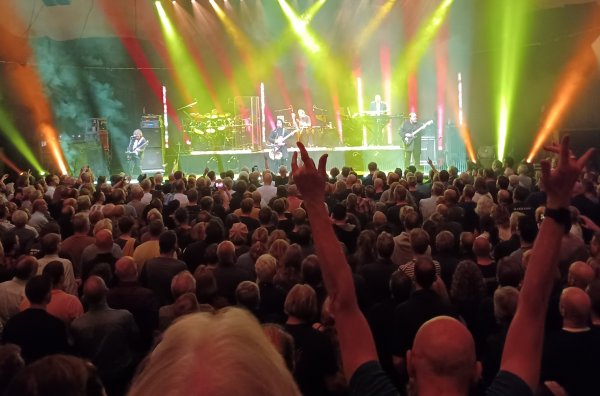 SETLIST
Be Hard On Yourself
– I) The Tear in the Big Picture
– II) Lust for Luxury
– III) You Can Learn
Reprogram the Gene
– I) Invincible
– II) Trouble-Free Life
– III) A Cure for Us?
Only a Kiss
Murder Machines
The Crow and the Nightingale
Sierra Leone
– I) Chance in a Million
– II) The White Sand
– III) The Diamond
– IV) The Blue Warm Air
– V) More Than Treasure
Care
– I) Maintenance Drugs
– II) An Hour Before It’s Dark
– III) Every Cell
– IV) Angels on Earth
Estonia
Quartz
Wave
Mad
Afraid of Sunlight
~ Encore:
When I Meet God
The Great Escape
~ Encore 2
Garden Party