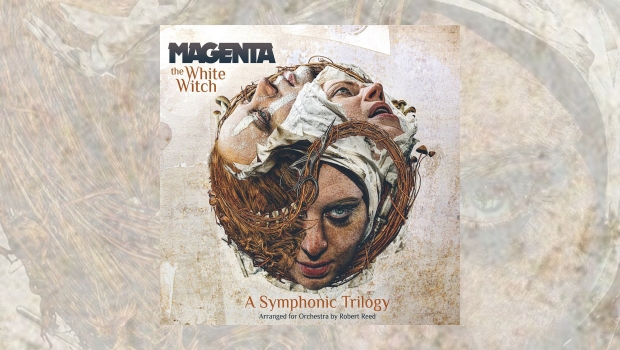 It is the time of Halloween, a time for Ghosts, Ghouls, Wizards and Witches, a perfect time for Magenta to release their rather different and ambitious new album, The White Witch – A Symphonic Trilogy. Magenta unveil a retelling and extension of the story of The White Witch, who first appeared on their debut album, Revolutions in 2001. Magenta have always been a progressive rock band with a widescreen and symphonic nature to their music so it only seems natural that they should eventually go ‘fully classical’, with Robert Reed demonstrating his musical versatility and mastery of orchestration to describe an exciting tale.

The White Witch is a fully classical album with no synthesis with a rock band, but many of the themes will be familiar with Magenta fans as they are drawn from the aforementioned Revolutions debut from over 20 years ago. What is less well known is that the track Lust on their landmark album Seven, from 2004, was the next part of the story of the White Witch. Listening back to the original Lust now, one can clearly hear that it was written in a manner ideal for a symphonic treatment, with Reed’s keyboards sweeping across the musical scene like waves of strings. Sacrifice, the first part of this re-imagining and expansion of that story, is based on ‘The White Witch’ side of Revolutions, followed by Retribution, which is inspired by Lust. The third part, Survival, is a new piece to complete the story, although there are clearly some familiar themes drawn from the earlier albums running through it.

The long-time collaborator of Rob Reed, Les Penning, formerly associated with Mike Oldfield on his classic mid-’70s albums, provides suitably velvety tones as the ‘Storyteller’ at the beginning of each section. Penning intones like a Hammer Horror actor the tale written by Rob’s brother, Steven Reed, who also wrote the lyrics. Both of the Reed brothers have confessed to a great love of such hammy horror films, particularly the 1968 Vincent Price classic Witchfinder General, a genre they more fully explored on the 2020 Magenta album Masters of Illusion. The White Witch simultaneously transports Magenta much more fully into the worlds of horror and the film soundtrack style.

Chris Fry, renowned for his soaring electric guitar solos, is equally skilled at weaving his musical web with beautifully played and magical classical guitar, which threads through the pieces. His interplay with the woodwind on Sacrifice is particularly delightful. Chris has always been a stellar and mesmerising electric guitarist, and has shown some brief interludes of his equal mastery of the acoustic on previous Magenta albums and in concert, but on this album he displays his dexterity and touch on the classical guitar to wonderful effect. This may be orchestrated music but there is still dynamism and excitement, particularly on Retribution in which Fry’s dazzling classical skills convey the drama without the need for any electricity! Alongside Fry, Katie Axelsen on flute and Sam Baxster on oboe as featured soloists add beautiful textures to the main orchestration by Reed.

Magenta have always had probably the best female vocalist in modern progressive rock music in Christina Booth, and she has always held her own – and indeed flourished – amid the powerful instrumentation of the band. However, the symphonic nature of The White Witch is a wonderful vehicle in which she can shine, with more nuanced expression. Her voice is crystal clear, intuitively moving across the emotional spectrum and sounding vulnerable and fragile at times, particularly in Sacrifice. Elsewhere she is more joyous and commanding, particularly in the ‘Into Your arms, Sister Luna’ finale on Retribution.

Of course, in an album based on benign witchcraft, there has to be a central figure casting magical spells and directing proceedings – enter the keyboard and orchestral wizard Rob Reed. He has previously explored the symphonic form on his otherwise fully electronic solo 2020 album Cursus 123 430, which has the 19-minute Cursus – A Symphonic Poem on the bonus disc of the deluxe edition. Back then I described that classical excursion as ‘lush and simply magnificent’, and in some ways I preferred it to the main very Jean Michel-Jarre and Vangelis inspired album (it’s well worth searching out). That may or may not have been an earlier ‘dry run’ or experiment for Reed in the lead up to this more expansive piece – either way, it clearly showed his skills in composition and orchestration which have become more fully realised on The White Witch, fusing the music with Christina’s beautiful voice.

Rob Reed has shared that film composers John Barry, Ennio Morricone and John Williams have all been massive influences on his work, and on this album he reaches for the heights of his heroes as he excels in composing sweeping, imaginative orchestral pieces evoking images and touching on emotions, particularly the stirring Survival. This finale completes the tale as the White Witch, Sara, transforms into a ‘gift for mankind’, a positive force with the power to heal, ‘shining a light in the world’s darkest hours’ (we could probably do with a bit of that light right now!).

The question is, do you have to know the earlier Magenta album pieces to enjoy or ‘get’ this new album?

No, you don’t have to know those pieces to enjoy this album. The White Witch – A Symphonic Trilogy stands on its own merits, engaging the listener with its narrative and the lush, flowing, stirring and imaginative orchestral music.

Magenta continue to follow their own distinctive path, and with The White Witch they have pulled off the trick of showing their versatility, treating us to a bewitching Symphonic and cinematic piece.