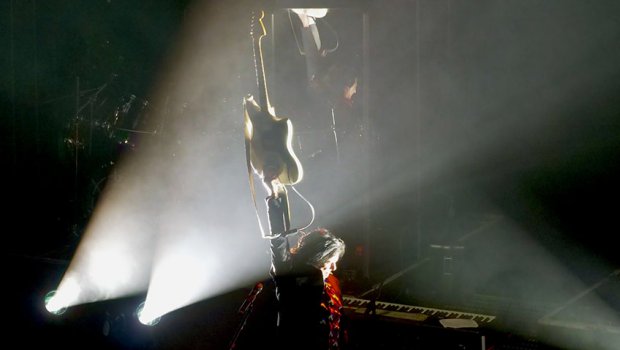 The bond of affection between Marillion and their fans is well established and well known. The band that pioneered crowdfunding back in 1997 succeeded in that endeavour due to the love and support of their core fanbase. Here, on the optimistically named ‘The Light at the End of the Tunnel Tour’, the fans were called upon once again, this time to ‘insure’ the tour by laying down pledges which the band would keep, should gigs be cancelled due to Covid. Thankfully, Marillion did not go the way of Genesis or Steps and no such cancellations occurred, the pledges of the aptly named ‘Lightsavers’ being returned along with their rewards for pledging. 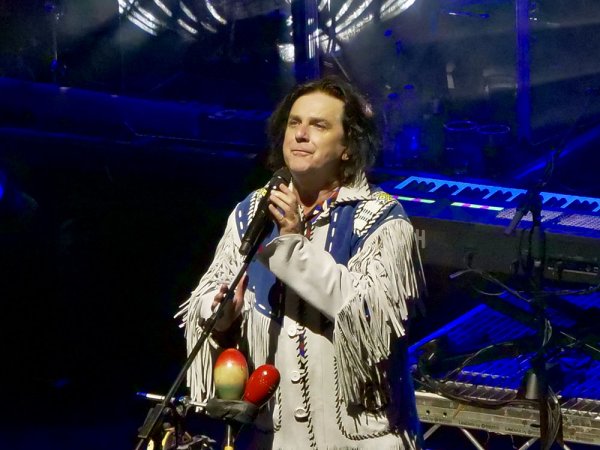 On the night, Steve Hogarth joked that the band had ‘gone into the insurance’ game. I couldn’t help wondering how many Lightsavers felt that it was a bit more like being at the bookmakers, checking social media each day to see if their bets had failed. For their part, Marillion did all they could to mitigate the risk by being in a strict bubble to minimise the chance of testing positive. Such is the nature of the tentative steps bands are taking to tour again. The band must have hoped that we’d be looking back on the last year-and-a-half with bewilderment by now. Instead, we are a little way off reaching that light at end of the tunnel. So, after a ‘lightbulb’ moment from manager Lucy Jordache, the tour was protected and each night the Lightsavers were rightly applauded for their commitment.

The bond of affection was fully evident on this first of two nights at Hammersmith Apollo, which completed this short UK tour, in the rapturous response the band received from their fans. Starved of live music since the first lockdown, for many fans this tour was their first chance to get back into the venues. For the band too, this had been a significant break in playing live. When I spoke to Mark Kelly recently, he told me that this was the longest break in playing live with Marillion since he joined the band – in 1981! 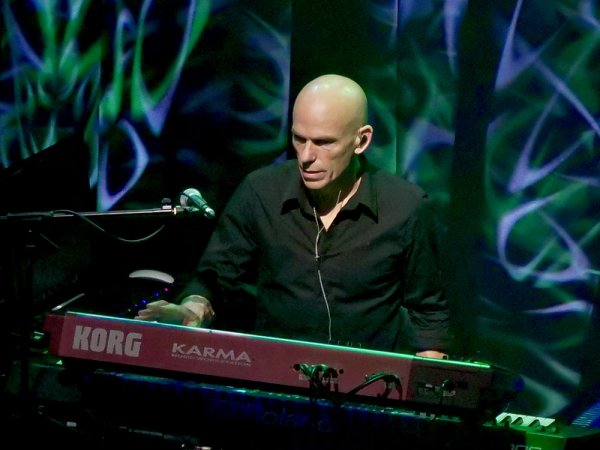 Happily, for all this caution, there was nothing tentative about Marillion’s performance. Clearly, they were enjoying being back on the road as much as their fans were enjoying seeing them. The band were, quite simply, superb. For a group who are never anything less than excellent live, this was nevertheless one of the best live performances I’ve ever seen them put in. There was passion, energy, enthusiasm and joy. The mix was perfect, and the playing was stellar. There were standout moments, of course: Steve Rothery’s soloing on Neverland comes to mind, and the closing section of King always sends a shiver down my spine. But what stood out most of all about the night was the synthesis of the band itself; all five musicians beautifully weaving together the intricacies of melody and rhythm. 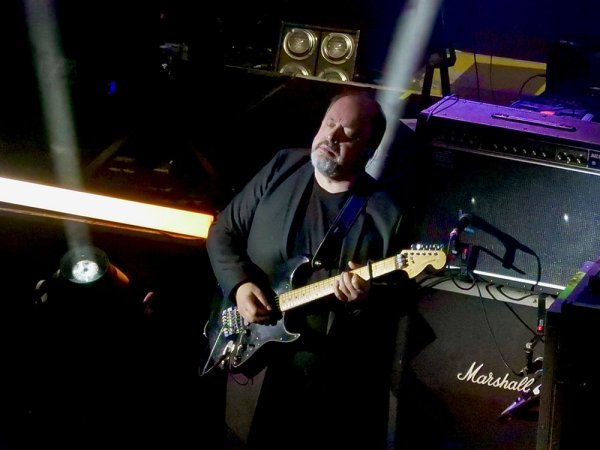 They opened with Sounds That Can’t Be Made, as on every night of the tour. It’s a great choice for an opener and gets the crowd involved from the start, singing back the closing guitar riff to a gentle accompaniment from the band. I don’t know exactly when this tradition began, but it’s just the right start to bring us all back together. The immense King followed, a stalwart of sets of old which has lost none of its raw power over the years. A glance over the tour setlists reveals this to be one of the nightly fixtures from a set heavy on tracks from the early days of Hogarth’s time with the band. 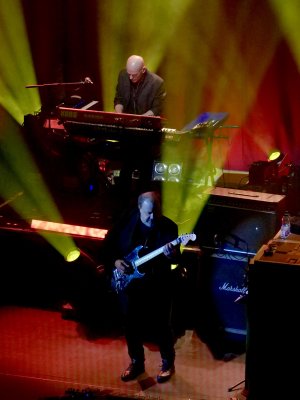 One of the tracks which was switched in and out across the tour was Fantastic Place, from Marbles. As with King before it, this is one of Marillion’s finest moments. The song builds from its quiet beginnings to a bombastic, emotional crescendo, delivered tonight with pomp and majesty. Each song they played seemed to be even better than the last. When Steve Rothery reached for his acoustic and began to play Easter, that thought was reinforced. The dynamic shifted, Kelly and Rothery swapping melodies and Hogarth showing the audience that his voice is undiminished in the over thirty years that he has been with the band.

Marillion had been playing the opening suite from Brave each night – Bridge, Living With the Big Lie and Runaway. Tonight, the latter was switched out and replaced with No One Can from 1991’s underrated Holidays in Eden album. I’m whisked back to some of the first gigs I saw Marillion play back in the ’90s. This is a set rich in nostalgia and populated by the band’s shorter tracks; a complete contrast to the epic-laden ‘With Friends From the Orchestra’ tour of 2019.

With the new album An Hour Before It’s Dark on the way early next year (or once there’s enough cardboard available, as Hogarth wryly commented), we are treated to one new song, the nine-minute opener Be Hard on Yourself. Unlike many on the night, I hadn’t had the chance to hear the song in advance, so I was trying to discern as much as I could from the live rendition. The keyboard work reminded me a little of The Leavers from F.E.A.R., which I love, and there is an urgency and melancholia to the tone which suited the song’s climate crisis theme. I’ve since heard the studio version and, if the rest of the album is this good, everyone is in for a treat. 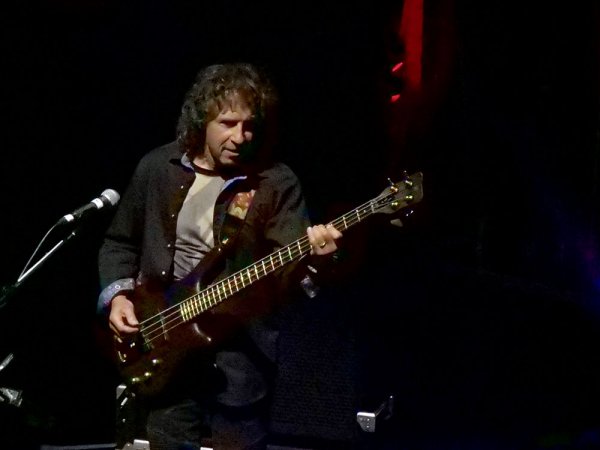 You’re Gone is next and then the rarely played Season’s End B-side The Release. I suspect the track’s presence across the tour may have been a reference to our emergence from lockdown(s) and escaping the frustrations we’ve suffered. The main set is concluded in absolutely stunning fashion with Neverland. For many, I’m sure, this was the highlight of the evening, and the ovation that followed continued unabated until the band returned to the stage with the opening bars of Afraid of Sunlight. Like the whole of the album it graces, it’s a song that sounds even better live, and tonight is no exception. Following this with the uplifting Made Again gets the audience involved in singing along once more. It is little surprise that, despite this being a set made up of shorter tracks, The Leavers, a song about touring, completes the evening. That bond of affection with the fans is to the fore once more as the epic concludes with All One Tonight. 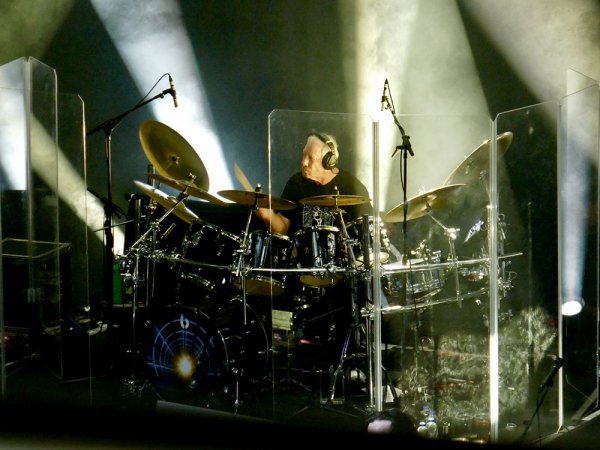 If I had one small gripe it would be the interchangeability of the set. Unlike some, I can’t keep myself from looking at setlists in advance. On the orchestra tour I was disappointed that I saw them on one of the dates where Ocean Cloud (which I’ve longed to see live) was dropped. This time around, it was This Train Is My Life, Runaway and The Party. Not a big deal, and for those who go to more than one gig (of whom I know there are many), it’s great to have a set that changes every night. It’s also more work for the band to rehearse so many songs, so kudos for that. Anyway, I’m sure I’ll get to hear these played live at some point. After all, when the band are this good, they demand to be seen again and again. A thoroughly enjoyable evening in the company of prog greats who continue to perform at the very top of their game.

[Photos by Jamie Robertson, used with his kind permission.]

SETLIST
Sounds That Can’t Be Made
King
Fantastic Place
Easter
Bridge
Living With the Big Lie
No One Can
Be Hard on Yourself
You’re Gone
The Release
Neverland
~ Encore:
Afraid of Sunlight
Made Again
~ Second Encore:
The Leavers

Marillion – With Friends at St. David’s →