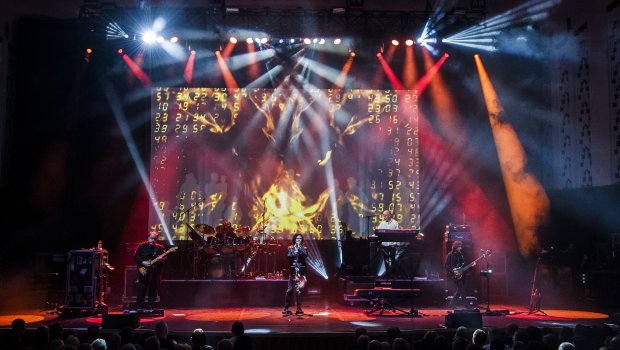 Much had been made of Marillion’s return to the more comfortable seated concert halls for a brief U.K. tour, following up their grand performance at the iconic and similarly grand Royal Albert Hall. They seem to be suddenly into a sort of Indian Summer of their career, enjoying the sort of commercial and critical successes that have evaded them for some time. A band whose fanbase is uncompromisingly and unconditionally loyal, they were never going to mind where the boys played; when it’s family, that’s what you do.

Included on the tour were a first trip to Liverpool for a number of years – it might even have been in the days of the Royal Court when they visited last – plus a first time ever trip to York, giving an indication of their intentions to keep things fresh. So, no more cramming into the massively atmospheric homecoming space that is the Manchester Academy, or the necessity of queuing for hours to get on the barrier and having to pace the drinks so that the toilet trips can be avoided. Altogether, there’s no denying that watching the Marillos in the Birmingham Symphony Halls and Gateshead Sages of this world is a much more refined and pleasurable concert experience.

Marillion online groups had been canvassed by the social media savvy Marillion management over the question of what sort of show the fans would like. For those who hadn’t seen the band at the RAH, the prospect of them including the string quartet, In Praise Of Folly, to replicate the second half of the RAH show was tempting, but instead the option of a new, well, rejigged, set was the order of the day. A tour to include the string orchestrations which were a personal highlight of the RAH gig surely must follow some day.
Producer Mike Hunter and Panic Room/Steve Rothery Band guitarist Dave Foster were in attendance in Liverpool and was that not some of the Rothery family sat in prime position in The Barbican? All present to witness a show, nay production, the likes of which haven’t been seen on a Marillion tour for some time. Marillo weekend attendees may have had the benefit of more expansive shows at the biannual events, but an impressive multicoloured and synchronised light show plus the almost constant projections of a huge backscreen were trundled round the U.K. for a fully immersive audio visual extravaganza.

York also saw Mr Hogarth in a running battle with his tambourine which at one point had his roadie scurrying into the front row to retrieve said percussion instrument which had been literally booted there. He seems to have spent the tour steadfastly strapped into a couple of jackets, Gallagher style, resolutely refusing to unzip; must be feeling the chill.

Musically, the F.E.A.R. material still has life left in it. El Dorado remains a slow burning opener before the manic “I’m becoming harder to live with, You can’t see into my head” frenzy and false ending – the fans just can’t wait to show their appreciation after sitting through a lengthy opener and Hogarth had to calm everyone from releasing their ovation before the tranquillity of the “grandchildren of apes” ending. The Leavers’ appearance mid-set is still a puzzler as there could be an argument for closing it off after The Jumble Of Days and saving the One Tonight coda for a rousing encore climax. That final section is truly made for an end of gig confetti cannon moment.

As it stood, the impact sadly seemed almost lost as it segued into the dancing opening to the Mad section of Brave, possibly lessening the impact in the communal moment.

Nit picking? Yes, what with dipping into and cherry picking from a further eight albums of what in retrospect is a vast catalogue. No-one could possibly argue with the inclusion of Seasons End, The Great Escape and Afraid Of Sunlight, all garnished of course with some beautiful Steve Rothery decoration.

Not averse to swapping things round in the tour setlist, they were relaxed enough in York (the last date of the tour) to be able to respond to a call for White Paper and such is the well-oiled machine that is the Marillion touring operation, the technical stuff that needs setting up can be done so quickly and efficiently without having to resort to awkward joke telling intervals. A stunning performance of one of the underestimated numbers from the last album resulted, with the only downside being that it replaced Out Of This World – not worth mentioning to your wife who’s seeing (and thoroughly enjoying) her first Marillion show in years and has earlier professed to liking ‘the one about the Bluebird’…

For those who wanted their cake and eat it, an unexpected This Strange Engine as the first Liverpool encore would have caused a few pleasant gasps, the clues coming when Pete Trewavas returned to the stage alone and bossed out the little bass solo that usually introduces the number. Mind, for the presence of Easter (inevitable in Liverpool given the “out of the port of Liverpool” line) topped off with a nod to the Garden Party early days and finally a monumental Sugar Mice in York, it didn’t really matter where you were. They can (rarely) do wrong.

However, from a personal point of view, having been a Marillion watcher over four decades and seen them through thick and thin, in cellars, in bars and enormodomes, the experiment in returning to the concert halls was a resounding thumbs up.

[All photos from Liverpool by Mike Ainscoe, Michael Ainscoe Photography.]