[With photos courtesy of Alan Jones, The Web U.K., used with many thanks]

When I was a child my favourite day of the year was Christmas Day. Like many of us who have grown old, although perhaps not grown up, that particular day has lost its magic. Luckily for Marillion fans, in 2002 the band created their own version of Christmas with the first Marillion Weekend at a Pontins Holiday camp in Brean Sands. The Weekends comprise a series of three concerts with different set lists at the same venue over three consecutive nights.

For the first time, the second of this year’s four weekends took place in Poland, in the city of Łodz, pronounced ‘Woodj’, as I was abruptly informed when asking a mystified taxi driver at the airport. The passengers on the plane were a great spectacle, many of them wearing their choice of Marillion shirt for the journey, a general feeling of bonhomie prevailing amongst the like-minded fans. 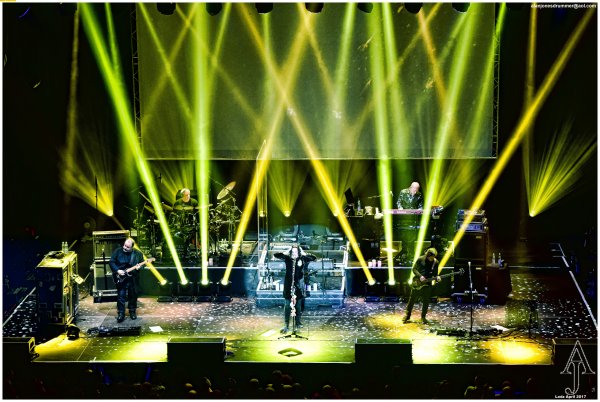 The venue for the weekend is Klub Wytwornia in Łodz, a good sized, modern venue with a capacity of around 2,500, attached to the Double Tree Hilton where many of the travelling fans and indeed the band and crew were staying. The fans are greeted by the volunteers from Web Poland fitting them with their treasured wrist bands which will remain fastened for the next thre days. Many of these bands will not be removed from fans’ wrists and will be added to in two years time at the next Marillion Weekend.

Inside the venue you are immediately taken aback by the number of people from Poland, U.K., Germany, France, Switzerland, Russia, Holland and, amazingly, U.S.A. and Brazil amongst the nations represented, fans of Marillion renewing old acquaintances and making new ones. The atmosphere is celebratory with an air of anticipation.

This writer must confess to choosing to forego the support acts each night, in favour of mingling and just soaking up the atmosphere. Why not? The feel good factor for many of those there was huge.

The lights go down and at 8.30 Marillion come on to rapturous applause and launch immediately into The Release. One of the things that many of the fans like about these weekends is that over the three days they will hear many songs rarely played live. 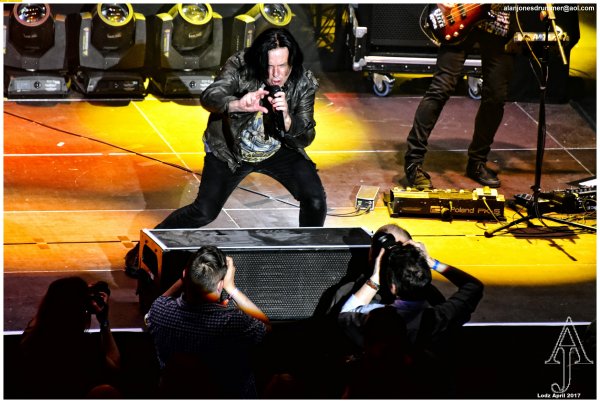 It is immediately apparent that the sound, by Phil Brown, is superb. Steve Hogarth, affectionately known as ‘h’, greets everyone and the crowd respond with chants of “MARILLION!” in many different accents from around the world. He is visibly moved before informing us that the band have counted up the songs recorded since he joined, which comes to 138 and roughly 170 since the band started. In his words they are going to treat us to “some of that shit” over the course of the weekend.

Tonight the set comprises 20 songs, only two of which were played on the most recent tour. The lighting is spectacular, Vari-lites abounding, from the balcony the stage floor is aglow with patterns of light and the backscreen projections are excellent. The production values for these weekends are marvellous.

We are taken on a musical journey, the lesser played songs, sounding fresher than ever. 7 songs in and the band leave the stage. h is alone, centre stage on his keyboard and he performs Hard as Love solo, his voice sounding better and stronger than ever. He is then joined by Steve Rothery on acoustic guitar for A Collection, a rarely played song from the bonus disc of Holidays on Eden. At this point this writer must confess to being slightly overwhelmed and surely there is not a dry eye in the house. Pete Trewavas then joins and the trio treat us to The Answering Machine, which h starts off by, successfully, encouraging the crowd to join him in Flamenco-style clapping. Mark Kelly and Ian Mosley then return to join their band mates in an acoustic performance of Faith. Rothery and Trewavas having swapped their respective guitar and bass for this song. The short acoustic section is only four songs long, but leaves many yearning for a re-run of the Less Is More Tour. 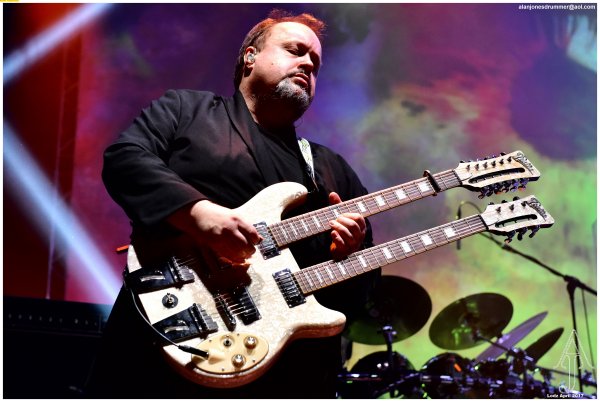 The band, back in electric mode, launch into A Few Words For The Dead, a poignant reminder of the pointlessness of war and the fervent wish that hate be replaced with love. A theme to be repeated at various points throughout the weekend.

There are many highlights amongst the performance this evening. The last three of This Town, The Rakes Progress and 100 Nights from Holidays In Eden leave the audience craving more. The band do not disappoint, returning with one of their most powerful songs, Gaza, an epic journey of many movements. It finishes with the lines sung by both band and crowd:

“With the love of our family
We can rise above anything.
Some day surely someone must help us.”

I cannot add to that. 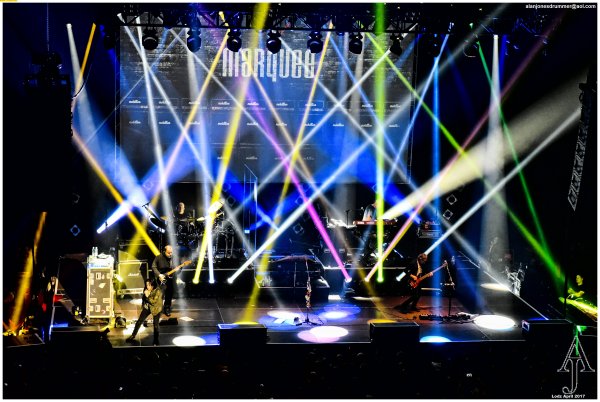 None of us know how the band can equal, let alone top, last night’s performance. At 8.30 prompt the band minus h take to the stage to play a truncated version of Hotel Hobbies, the first track on Marillion’s last, and in many fans’ eyes best, album with Fish, Clutching At Straws from 1987. h emerges rear stage centre, backlit, resplendent in leather jacket as the story’s central character, Torch. He resembles a long-haired Rael from The Lamb Lies Down On Broadway. The effect is visually and audibly stunning, Ian Mosley in particular at full throttle and clearly relishing the chance to play this older material live. The next six songs showcase h at his theatrical best. He is clearly very comfortable singing this selection of Fish-era songs and his enthusiasm is infectious. The band are on fire. The seventh and final song from the album, Sugar Mice, is an old fan favourite, Steve Rothery delivering that song’s beautiful guitar solo with aplomb, greeting the applause with a nod and a smile before throwing yet another plectrum to a grateful member of the audience. Does he know just how good he is and what he means to Marillion fans? If he does he never shows it. As humble as ever. 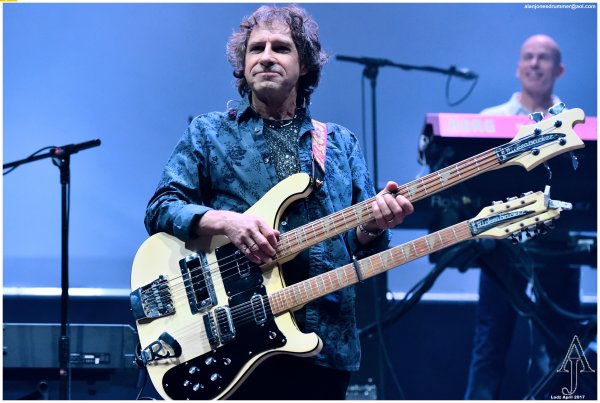 Two songs from Misplaced Childhood followed by a magically manic Market Square Heroes leave the audience, and I suspect the band, exhausted after 50-minutes of Fish-era magic.

Tonight, however the band mean business. The applause has barely diminished before h, accompanied by Steve Rothery, sings the opening section El Dorado from last year’s critically acclaimed album F.E.A.R.. For many this will be the first time they have seen the whole album played live. The band then perform Living In Fear with its message that we should throw away our weapons and unlock our doors, a worthy antidote to the more doom-laden lyrics of the remainder of the album. The audience happily reprise the song accompanied by the band, enthusiastically singing “What a Waste of Time, The Great Wall of China. What a Waste of Time, The Maginot Line.”

Next up is The Leavers, a five part epic that takes the audience through the band’s journey as the Leavers and that of their family and fans as Remainers. White Paper was perhaps the highlight of the evening. A moving song which can mean many things, but for me is about growing old with a loved one. h’s voice and delivery is sublime on perhaps the most beautiful song the band has ever written. The New Kings, with its theme of corruption and unnecessary war, is a serious subject, the extraordinary back projections and intensity of this song leaving no one in doubt that Marillion still have a serious message to deliver, and at this stage in their career have no intention of sugar coating it. 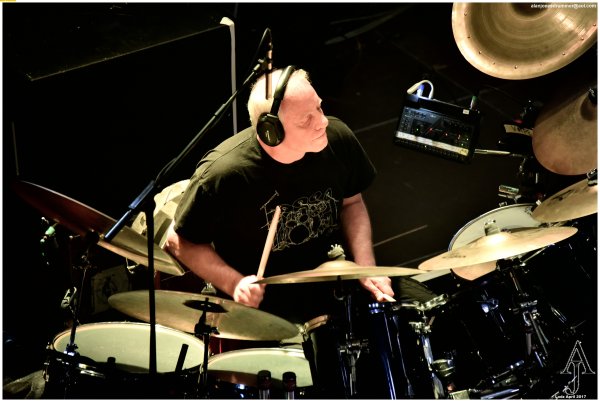 A thought provoking night indeed. h said very little throughout, the songs and his emotional delivery said it all. There is no encore, band and audience withdraw happy, and in this writer’s case deep in thought to the refrain of Tomorrow’s New Country, the last song from F.E.A.R. being played over the PA. 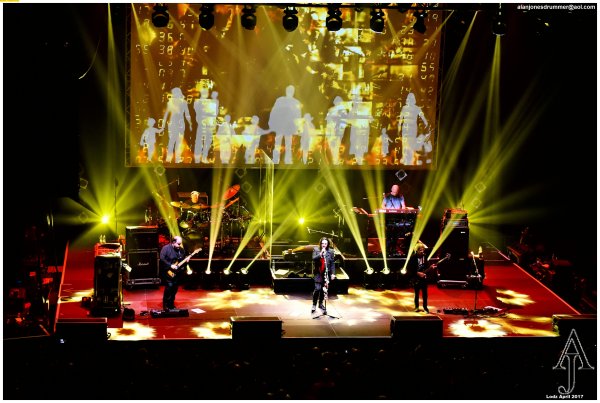 As is the custom, one night of the weekend is Album Night, this year’s choice being Marillion.com. h is in much more of a mischievous mood tonight, his opening words of “Good to see you all again tonight. I think I met most of you at breakfast this morning” were only partially said in jest.

They then launch into all nine songs from the album. Despite a tuning malfunction on Pete’s twin-neck Rickenbacker, Marillion.com is delivered perfectly. It sounds as fresh as ever, 18 years after release and songs such as Go, Enlightened, Interior Lulu and House deserve more frequent airings on future tours. The band finish the album and leave the stage to rapturous applause.

The second part of the show commences with Splintering Heart, a backlit h delivering the heartfelt opening vocal before giving way to Steve Rothery’s blazing guitar break. There are few better opening songs to any set. The audience are then treated to King which is followed by a stunning rendition of the rarely played Berlin from Seasons End. 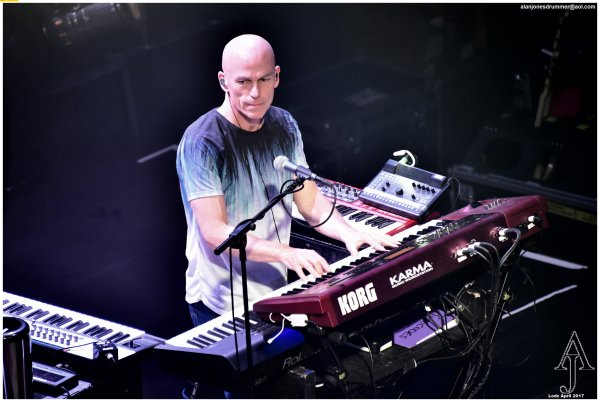 Fan favourite This Strange Engine is as moving as ever with two more blistering Steve Rothery guitar solos. An encore of Real Tears For Sale is followed by the crowd singing English and Polish versions of Happy Birthday to a smiling Mark Kelly who is enjoying a well deserved glass of red wine at his keyboards.

The band leave us with another performance of last night’s One Tonight from The Leavers which is restarted due to h, in his own words, screwing up the first attempt. A nice bit of lighthearted humour. The band and crowd sing as one:

Words that sum up perfectly the feelings of all those involved in a wondrous three days. 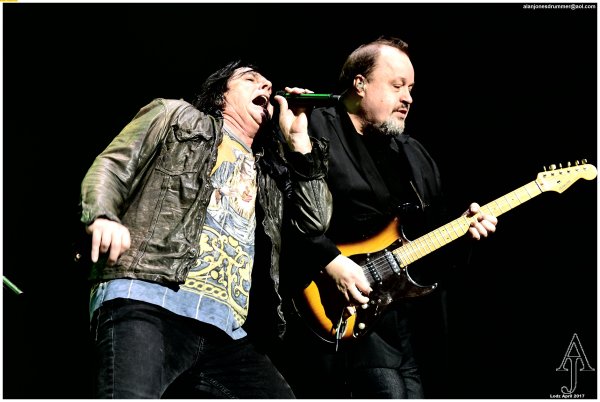 SETLISTS
Day 1
The Release
The Other Half
One Fine Day
You’re Gone
The Only Unforgivable Thing
Estonia
Sounds That Can’t Be made
Hard As Love
A Collection
The Answering Machine
Faith
A Few Words For The Dead
A Voice From The Past
Beyond You
The Great Escape
Gazpacho
This Town
The Rakes Progress
100 Nights
~ Encore:
Gaza

Day 2
Hotel Hobbies
Warm Wet Circles
That Time of The Night
White Russian
Incommunicado
Slainte Mhath
Sugar Mice
Lords of the Backstage
Blind Curve
Market Square Heroes
El Dorado:
– Long Shadowed Sun
– The Gold
– Demolished Lives
– F.E.A.R.
– The Grandchildren of Apes
Living In Fear
The Leavers:
– Wake Up In Music
– The Remainers
– Vapour Trails In The Sky
– The Jumble of Days
– One Tonight
White Paper
The New Kings:
– Fuck Everyone and Run
– Russia’s Locked Doors
– A Scary Sky
– Why Is Nothing Ever True