‘WHY IS NOTHING EVER TRUE?’

A band that have been going since the early 1980s, and have eternally been perceived as being unfashionable or terminally ‘uncool’ by those who presume to define what acceptable or ‘cool’ is, are producing well-respected material with real political and cultural resonance (even achieving 5-star reviews in The Guardian!). They are playing these impactful songs to sell-out national audiences and easily managed to sell out the Royal Albert Hall TWICE in one week. Well, many long term fans will tell you that Marillion have always focused some of their material on important issues, even if others persisted in making lazy or misinformed assumptions about the nature of the band and their music. Nevertheless, it has to be said that with songs like Gaza and their most recent album F.E.A.R., Marillion have focused powerfully and insightfully on crucial and controversial subjects. They have bravely eschewed the touring strategy of many other veteran bands who indulge in virtual ‘Jukebox’ tours, playing all the tired old ‘Golden Oldies’ and Hits, instead choosing to play their recent and most ambitious pieces that are not afraid to say important things about our modern world. 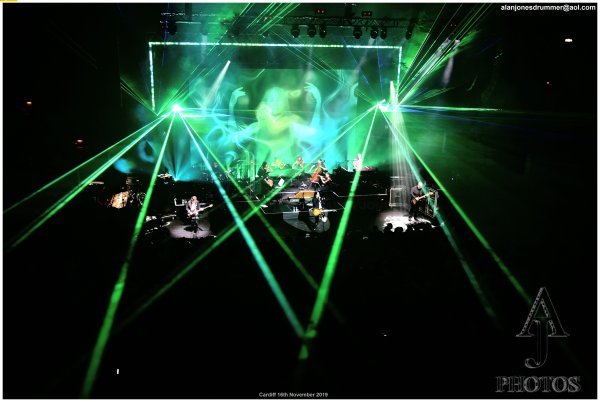 No compromise. Marillion go their own sweet way, preferring artistic freedom of expression rather than chasing audiences or diluting their material. A sold out St. David’s Hall in Cardiff with its outstanding sonic environment is a perfect venue for Marillion to perform, and on this night they are on fire, as the cameras roll for a future live Blu-Ray release. Marillion come out and hit the audience straight between the eyes with a massively powerful Gaza, laying bare the horror of the experience of those having to live there, faced with the constant threat of violence and deprivation:

Marillion brew up a musical avalanche of Eastern influences and power chords with the orchestra adding extra weight to the imagery. Steve Hogarth is clearly impassioned and moved by the impact of the music and the meaning in the lyrics, prowling around the stage. Reports of Hogarth’s voice needing a rest earlier in the week seem curious as he is in very fine voice tonight, alternating between full-on rock vocals with more gentle vocal passages with ease. Steve Rothery’s guitar wails in grief and Ian Moseley handles the complex switches in tempo, feel and changes of rhythm with consummate skill. Hogarth intones menacingly, darkly touching on the apocalyptic poetry of Yeats before concluding with a hint of hope:

“Like a nightmare rose up from this small strip of land,
Slouching towards Bethlehem…
… With the love of our family
We can rise above anything
Someday surely someone must help us…”

Anyone expecting a relatively cosy walk down memory lane, playing the ‘hits’ like Kayleigh or Lavender, are in for rather a shock! The politics eases off for Beyond You from the classic 1995 and recently re-released album Afraid of Sunlight. This is a song which has really benefited from the arrangement with orchestral players on the recent With Friends from the Orchestra album of re-modelled songs, with the strings enhancing the sense of pathos on the opening section and really enhancing the Phil Spector ‘Wall of Sound’ style of the more up-tempo part. 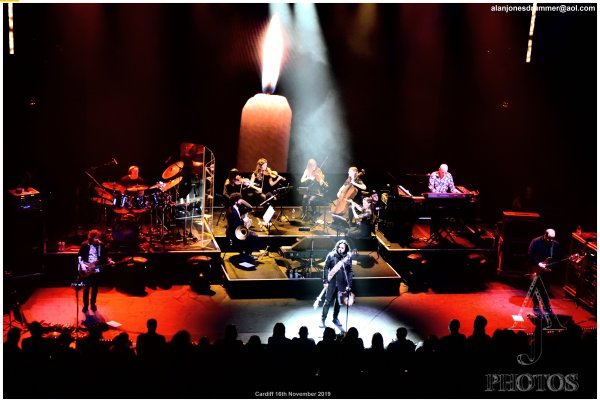 Familiar Marillion themes of water and death appear through the set – portrayed both elegiacally and dramatically in Estonia and the rarely played epic Ocean Cloud. Interestingly, Hogarth explains the origins of Estonia, which resulted from a chance encounter on a plane with a documentary maker who was the only British survivor from the sinking of the ‘Estonia’ in the Baltic in 1994. The filmmaker told him the whole story, in which he witnessed many dying around him, clinging to the upturned hull of a capsized lifeboat for five hours as those around him were swept to their deaths – it’s a sobering story and gives the ensuing performance more resonance, with an orchestral introduction and suitably liquid strings in the mid-section. It’s a starkly beautiful piece and simply one of the best songs the Hogarth-era Marillion have ever produced, played with real feeling and subtlety… but personally I did miss the more subtle balalaika style of guitar from the original version.

The power of water emerges again later in the show as Hogarth introduces the story of the long-distance ocean rower Don Allen who crossed the Atlantic TWICE in a rowing boat. This widescreen epic song is perfect for the augmentation of orchestral instruments with the strings giving a sweeping cinematic effect as the wonderfully evocative visuals are supplemented by sound effects and a tremendous and flawless band performance. It’s a real treat for the crowd to hear this rarity, and one can understand why Marillion just knew it would make a great basis for added orchestration, which adds suitable emphasis without over-powering the piece.

Hogarth announces Season’s End by recalling that he joined the band as “the impurity in the diamond” to make that first album with the band 30 years ago, and they wrote this song “and now it’s become current”. The theme seems more timely than ever and the ominous threat of climate change is conversely conveyed with a lovely interchange between Rothery’s guitar and the strings as they interweave in a swirling ascendancy with Mark Kelly’s keyboards to a stunning crescendo. The politics continues later with The Hollow Man from Brave, which features Steve Hogarth on keyboards centre stage, blending smoothly with the strings, especially the cello. The lyrics are not particularly political but the string of images of leaders such as Trump, Putin, Cameron and May behind a song called The Hollow Man have blindingly obvious connotations! 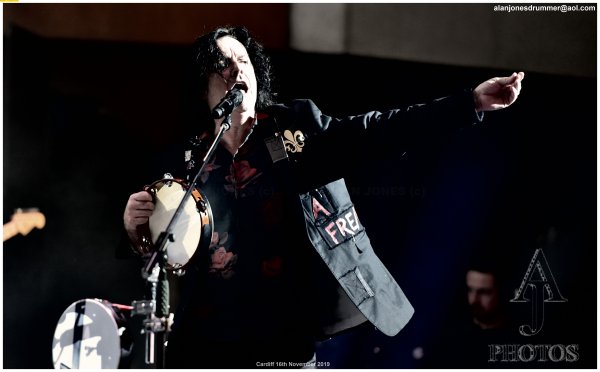 Marillion’s last album, Fuck Everyone and Run (F.E.A.R.) had a tremendous impact and seemed to reinvigorate the band, reminding many that they were still out there and still producing worthy material. After the political imagery of The Hollow Man it seemed appropriate for them to play one of the F.E.A.R. epic pieces, The New Kings, which Hogarth introduces as his ‘Rant Song’, adding that it is an album which they “suspect is the attitude of most of the people that lead us”… with what’s on offer from the leaders in the forthcoming U.K. election, it’s impossible not to agree!

The New Kings is a truly remarkable piece which is scathing in theme and lyrically acerbic, with Hogarth singing repeatedly in falsetto:

Pete Trewavas anchors down this leviathan of a song with perfectly judged bass, as he does all night, and adds effective backing vocals. This is a real tour de force for the band and orchestra as pizzicato strings trip along with the players also adding backing vocals whilst Rothery’s guitar plaintively oozes regret. The dramatic Why is Nothing Ever True? section is stirring as a Spitfire flies across the screen accompanied by the sound of the horn and the band rises in a wave of power with Moseley and Trewavas driving the piece along, Mark Kelly weaving his keyboard sounds around the piece with skill and precision. Hogarth bitterly concludes:

This is certainly not a ‘feel-good’ Saturday night of fun and frolics – Marillion are up there punching out their uncompromising message… and the crowd are absolutely loving it.

After such intensity, Marillion moved on from the more cerebral to the starkly emotional as they played a truly heart-breaking version of The Sky Above the Rain, a showcase for the strings and one of the best Rothery performances in any song he has played, his guitar dripping with emotion. The main gig ends on a real rock out with Seperated Out, or perhaps that should read ‘ZEParated Out’ as the strings mischievously and enthusiastically slip in a few unmistakable bars of Kashmir, which is great fun. 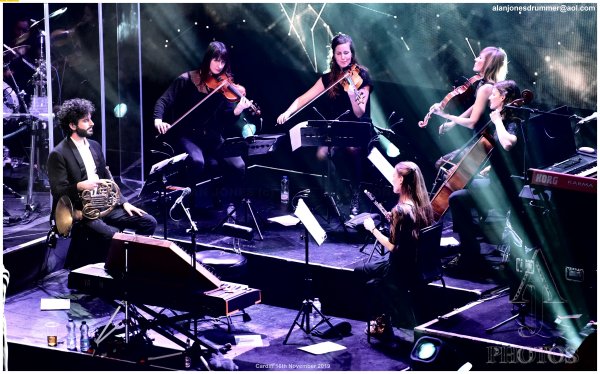 Fantastic Place seems an apt description for the venue tonight and it is a lovely piece for lush strings and Kelly’s keyboards, following the aforementioned Ocean Cloud in the first encore. The crowd go crazy hoping for a second encore and are rewarded with Hogarth returning with his musical cricket bat and unbelievably they launch into yet another epic with This Strange Engine, a deeply personal and autobiographical piece for Hogarth in which he pours out his heart with an assured and affectingly emotive vocal. It is yet another triumph for band and orchestra as they combine so smoothly in a live setting, adding great impact to the more dramatic sections and lovely touch in the more emotional parts, brilliantly performed by Hogarth, Trewavas, Moseley, Kelly, Rothery and ‘Friends’.

This was a stunning and outstanding performance from Marillion. They do not compromise and such a setlist, full of FOUR epic pieces and shot through with intense and important issues, may have been rather challenging for the more casual Saturday night gig-goer looking for some light relief! Make no mistake, this was a very entertaining gig with a charismatic vocalist, stellar performances from the whole band and orchestral players, along with dazzling and captivating projected images and spectacular lights – it’s a real ROCK show… but lightweight fun or a nostalgic trip down memory lane it ain’t!

Marillion just do what they want to, and they clearly want to express themselves on relevant contemporary issues and tell elegiac, dramatic stories… if you go to see Marillion you simply just have to go along with the ride.

Hopefully it will in some ways move you emotionally, amaze you and make you think. If it does none of these things, can I suggest checking your pulse?!

[TPA would like to thank Alan Jones for the photos, used with his permission and the agreement of Lucy Jordache of Marillion management. TPA would also like to thank Paul Turner for the information regarding the Orchestral players.]

SETLIST
Gaza
Beyond You
Season’s End
Estonia
Hollow Man
The New Kings:
– i) Fuck Everyone and Run
– ii) Russia’s Locked Doors
– iii) A Scary Sky
– iv) Why is Nothing Ever True?
The Sky Above the Rain
Separated Out (including excerpt from Kashmir by Led Zeppelin)
~ Encore 1:
Ocean Cloud
Fantastic Place
~ Encore 2:
This Strange Engine