Or at least it should; as Lazuli lead singer Dominique Leonetti quips, the band’s previous trips to the UK have been afflicted by such obstacles as snow, demonstrations, Brexit, and now viruses. In fact, this first show of a run of six in the UK over the next week seems to come right at a tipping point in the effect that Coronavirus is having on the country. That said, of the hundred or so tickets sold, most people appear to have made the trip, and against the odds, Lazuli are here once again, overcoming adversity to present their uplifting and life-affirming music to their British fans.

The UK has been very supportive of the band since their first show here at 2011’s Summer’s End. I first saw them at their 2013 appearance at the festival where they completely blew me away. They really are the most engaging band I’ve ever come across, the phrase ‘joie de vivre’ could have been coined for them.

8.15 and Lazuli appear to a particularly warm reception. Their appearance never seems to change, except guitarist Gédéric Byar’s dreds getting longer – and greyer! There’s a wonderful consistency to the band, all in black, from the bondage trousers and beards of the front line to the stage set up with the marimba at the back between keys and drums. This time, though, they have a back projection, which comes to life throughout the set to enhance some of the songs, particularly from the latest album, Le Fantastique Envol De Dieter Böhm, which is played in full, showing the band’s great confidence in this new material. This confidence is well placed as the album is easily their best album to date, full of dynamic and uplifting songs, carried skyward on Domi’s sensational voice. 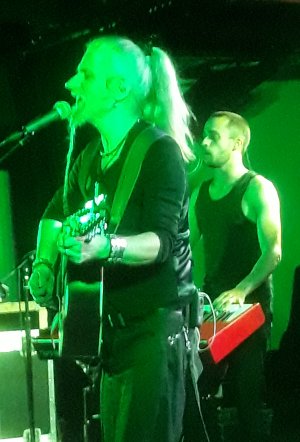 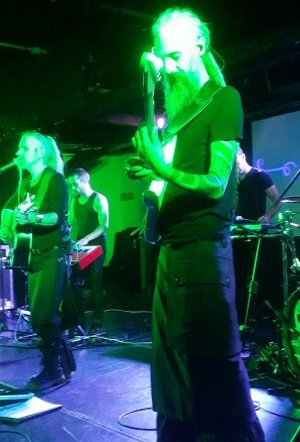 Right from the off, drummer Vincent Barnavol is the driving powerhouse, adding dextrous flourishes as required as the band work together, a wonderful unit, tuned to perfection and pulling together to deliver these stunning songs, all sung in native French, which just adds to the magic. This is certainly the best performance I’ve ever seen them play, and they are never short of stunning, but they just seem to have jumped up to a new level. Every note hit its mark and if there were any mistakes it would take a better man than me to spot them. Simply wonderful. The audience love them, they love playing, the sound is spot on, the song selection is great, covering all the bases you want them to with choice picks from their now extensive catalogue – seriously, what else could you ask for?

The interaction between Claude Leonetti’s unique Léode and Byar’s guitar is worthy of comment, they support each other’s playing, adding different textures to complement the sounds, and it works a treat. Seated stage right as usual, Claude’s soloing adds an otherworldly texture to the music, and Byar gets a solo spot at the end of Le Fantastique Envol, which is gratifying as his playing is deserving of the appreciation. Dominique is all grins and movement centre stage, his ponytail almost taking on a life of its own as he whirls and dances, lost in the music. It’s great to see and his enthusiasm is compelling. At one point he leaves the stage to dance his way through the audience with guitar in hand. You really can’t help but love these guys. 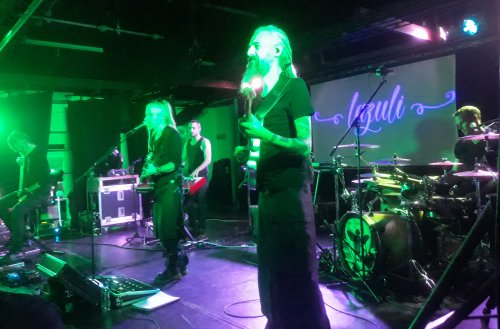 Keyboard maestro Romain Thorel adds influences from unexpected sources, from dance and electronic music, which complement the industrial and North African sounds that shine through the music elsewhere. It’s a cornucopia of styles that meld beautifully, and tonight Thorel is on fire, his duo spot with Barnavol is a complete joy, the forward-tilted keyboard set up a masterstroke as it allows full vision of what he does. Romain really does put in the yards, adding muted French horn and playing the bass parts via his left hand, also doubling up on the drums while Barnavol is on marimba or djembe duty. A sparkling performance throughout.

And so to the last piece of the evening. All gigs should, by law, end with 9 Hands Around the Marimba – it’s a wonderfully uplifting way to end, this time involving a whole medley of covers cut into it, including Nina’s 99 Red Balloons, Gotye’s Somebody That I Used to Know, The Beatles’ Michelle and Peter Gabriel’s Solsbury Hill, all accompanied by the de rigeur larking about. Unique and delivered with awesome precision, a thing of complete beauty.

If the curse that is Brexit prevents Lazuli touring in the UK beyond this year then we will all be poorer. Catch them on this run or their return in July (or both!), you might well regret it if you don’t.

Music must be allowed to fly over borders.

[Update: Unfortunately, since writing, the situation has deteriorated and today (Tues 16th March) Lazuli were forced to abandon the tour and return home before the French borders were closed, in order to avoid being stranded in the UK for at least 6 weeks. Hopefully, the band will be able to return later in the year.]