You all know who Peter Buck is, but maybe Luke Haines is one of those names you’ve heard but can’t quite pin down? He was the guitarist and frontman for reluctant Britpop outliers The Auteurs, who were a lot better than any other band beginning with an actual “O” in that sometimes dreary swagger of a musically conservative dead-end. You may remember their one minor hit, the rather fine single Lenny Valentino?

Haines was – and is – a guy with a knack for pithy one-liners, and back in the day used to have a rep for dissing his more well-known peers, and why not indeed? The title of his first volume of memoirs is Bad Vibes: Britpop and My Part in Its Downfall, which might give you a clue, and a damned good read it is too!

In his long CV, both as a band member and solo artist, Haines has a parallel career as a painter of distinctive portraits, mostly of Lou Reed, but this one of Mark E Smith made me laugh: 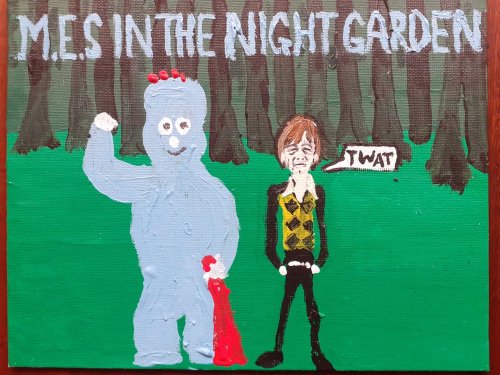 Peter Buck bought one of his Lou Reed paintings, postcard-sized identical portraits of whom Luke was commissioned to paint 72 times, once for each mention of the words “Lou Reed” in his song Lou Reed, Lou Reed. Actually it seems the words are mentioned 71 times, the extra one must be for luck. Anyway, as good a reason as any, I suppose! Buying the Lou Reed mini-portrait convinced the semi-retired American superstar that the Fates had decreed that the pair should work together, and Beat Poetry For Survivalists is the result. Or so the PR blurb has it. Alternatively, Haines says, “It was me that suggested we record an album together. I’m pretty upfront. Mainly, because it’s so easy to contact people these days, I figure why the hell not? You can pretty much speak to anyone you want to collaborate with. Life is too short not to do these things.” Whatever, the end result is now filling my aural cavities with sharp wordsmithery and devil-may-care slack-ass rock’n’roll in equal measure, a fine old racket that its inspiration, yep, you guessed it, Lou Reed, would have been proud… ok, grudging but proud, to have made.

If you are still with me, and you are one of those unfathomably odd types who place little value in song lyrics, then you may as well go away now and do something useful, as any album involving Mr Haines is going to be predicated on the many twists and turns of his artful lyrical shenanigans. Given Peter Buck’s past long association with one of the most alluring and surreally imaginative lyricists of his or any other generation, it is hardly surprising that he found a natural partner in Haines’ allegorical and occasionally acerbic wordplay.

The first song is Jack Parsons, the tale of an oddball rocket scientist-cum-occultist, who influenced L. Ron Hubbard, and was in thrall to Aleister Crowley, whom Haines describes as “the world’s silliest man”. Crowley apparently stole Parsons’ mistress, who also happened to be Parsons’ sister-in-law. Karma at work, I reckon. Parsons died when he accidentally blew himself up in his home rocket lab in 1952, as you do. You don’t get stuff like that on Abacab, eh?

Musically, the album is fairly sparse, as the voice is always the focal point of the mix. Buck’s guitar is never more than basic rhythm, but that was always his style. Egowankery was never on his menu. Here, the guitar is very low down in the mix, but that is deliberate, and not a problem at all. The most upfront instrument is Haines’ occasional and basic synth playing, which sounds kind of cursory and louche, which fits the slightly scuzzy and unwashed themes expressed in the lyrics to a tee.

Recorded disparately, as is the way these days, the four musicians never met during the recording process, with files zipping back and forth across the Pond, with the Final mixing done by Haines in his London studio.

French Man Glam Gang manages to put forth the proposition of Devo as a glam band, and has Buck’s most agitated work on the record, displaced voices off, and is quite unsettling. This, and the following self-deprecating but defiant Ugly Dude Blues – “Woke up this morning and I look like a freak, got a face like soup like a monster from the deep” – are probably my two top tunes on the album. “A fucker with a hump” never got his way quite like this.

Ending on a wistful note, we board the melancholy Rock’N’Roll Ambulance and find ourselves “Heading back to Earth in a rock’n’roll hearse”, and “You always know what you’re gonna find in the rock’n’roll afterlife”. For an album gestated from a conversation between a rock superstar and a rock’n’roll survivor after the latter had consumed “a few sherbets”, it ain’t too shabby at all. As Haines says “I am a satellite of Lou Reed. I am a prisoner of rock’n’roll”.