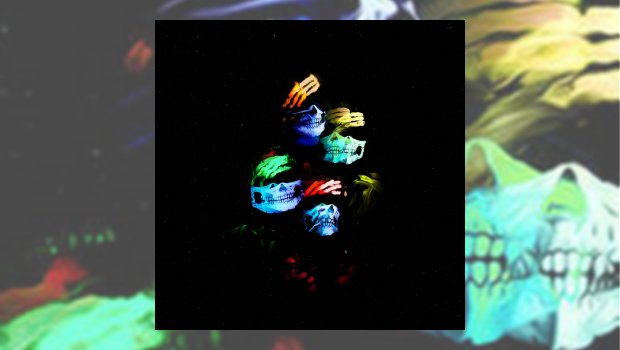 Sometimes it takes a small nudge to make the effort to listen to something. The New Death Cult had been sitting in my “to listen to” pile for months, but I kept putting them off. There was something about the mystery they perpetuated about themselves with pseudonyms, masks and suchlike that put me off. I completely understand letting the music speak for itself, but there’s something about bands keeping their anonymity in this way that ends up overshadowing the music. I needn’t have worried, and I am thankful for Wheel, as it was they who gave me the aforementioned small nudge.

Wheel, a band who impressed me greatly with last year’s Moving Backwards album, toured the UK in February this year, with The New Death Cult as their support. Every gig review I read for Wheel, gushed over The New Death Cult – and many of the reviewers stated that they had had the same reservations as me. It seemed I was doing myself a disservice by putting off listening to The New Death Cult, so I made a mental note to actually make an effort this time to listen to the album. And so here I am, letting you know that if you have also been procrastinating, don’t. This band is worth listening to.

From the first catchy notes of Light Spills Over, I’ve realised my mistake in letting this band pass me by for superficial reasons. A winning combination of the pop prog and heavy guitars of Muse, the stoner grooves and swagger of Queens of the Stone Age, and it’s an incredibly entertaining opening number. The enthusiasm in their recording is infectious, and I can only imagine how impressive they must be to see live – even if hidden behind skull masks and neon paint.

It’s at this point that I decided to see if I could find out why the band wear the masks, and I was pleasantly surprised. It would appear the main reason is to highlight equality. We’ve all seen the pictures of x-rays or skeletons to show that regardless of gender, sexuality, race or anything else, we are all the same. The band state that “the beauty of the skull mask as a symbol and statement is its intrinsic power to unite us”. The neon paint? An expansion of the power of equality through exterior “differences”, or as the band put it, “wonderful kickass shades of colour that makes the world feel vibrant, exhilarating, worth living in and worth fighting for”. Which sort of makes me feel bad for not listening to the band sooner, partially because of the masks.

The next two songs are enjoyable, but definitely not as engaging as the opening number, with a Biffy Clyro/Foo Fighters (or, heaven help me, Goo Goo Dolls) feel to them. They sound ready-made for radio, and while that’s not a bad thing, as I’m sure these two will be favourites for many people, they just don’t do a lot for me. I like them, and I wouldn’t skip them, but they really don’t show the band’s true potential.

The following song, Moon, however, is awesome – and probably my favourite from the album. The drumming was probably one of the saviours of the last two songs, keeping things more interesting for that alt-rock style than would be the norm, and they come into their own on Moon with its pummelling and pounding rhythms. The most frustrating thing about this song is how short it is. I love the slightly Eastern, slightly Tool-like stylings of the guitar. There’s some absolutely gorgeous bass playing, and a chorus destined to become an earworm.

Thankfully, even though Moon finishes far too quickly for my liking, The War is another good one. Though it heads back into the alt-rock stylings that didn’t push my buttons earlier, it does so with a far heavier and crunchier edge. The punchy and grungy chorus is so good, contrasting nicely with the cleaner, crisper verses, elevating the song to a higher level. The good thing about The War is that while the influences of the band are still evident, they are far less overt. Not that The New Death Cult have ever sounded derivative to me, but from Moon onwards they seem to be more comfortable in making their own sound, and I far prefer these more individual offerings.

This continues with Blood of Babylon and the upbeat Colours of the Mind, another favourite for me, held together with some funky bass. The penultimate track, Home, has menacing and dark verses coupled with optimistic choruses. At over five minutes, on an album that barely passes the half-hour mark, Home is the longest, and probably the strongest song. It only just loses out to Moon as my favourite. It also feels like it should be the epic closing number, and it feels slightly disappointing to me that it is not.

Instead, the album ends with Edel. The band’s Bandcamp claims them to be a “brilliant cross-over between Queens of the Stone Age, Biffy Clyro and Pink Floyd”, which is rather overstated in my opinion, and while there have indeed been hints of Floyd throughout the album, Edel is the only track which I think someone could conceivably describe as Floydian. Because I was so enamoured with Home, and felt like I had already achieved closure, it took quite a few listens before I was able to appreciate Edel. It is actually a quite beautiful tune, and closes the album perfectly.

I’m glad I gave Edel time, and in effect that song represents my experience with the band itself. It took me a long time to come around to listening to The New Death Cult, but I’m glad I gave them time. Don’t miss out on this album, as I nearly did. It’s an eclectic and enjoyable mix of heavy progressive psychedelic grungy pop and alt-rock. At times reminiscent of bands like Soundgarden and Alice in Chains, at times Biffy Clyro and Foo Fighters, at times Muse and Queens of the Stone Age, but at their absolute best when sounding like themselves.