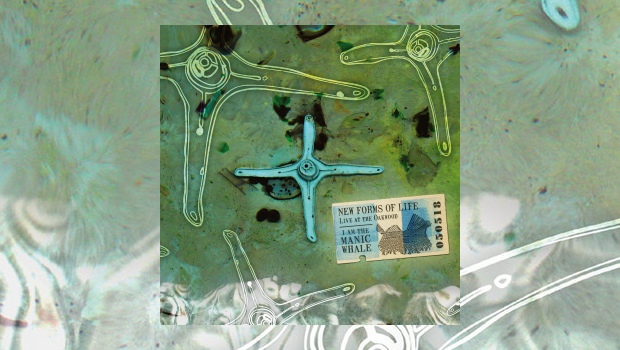 I Am the Manic Whale have released their first live album, documenting the album launch gig in Reading in May 2018 for their second album Gathering the Waters and is a fine summary of the increasingly popular and determinedly eccentric output so far by this talented progressive rock band. Covering subjects as diverse as Dr. Who, the history of printed word, notoriously unethical psychological experiments, heroic lifeboat men, cyber-bullying and peculiar mechanical creatures, it is clear that this is a band which glories in the unusual and unconventional.

Opening song The Man with Many Faces commences with the unmistakable theme to the long running Sci-fi T.V. series Doctor Who and then kicks into quite a heavy rock guitar riff with a funky Hammond organ-type keyboard underpinning it. They may choose geeky subjects sometimes but this is a band that can certainly rock. In contrast Princess Strange is rather more down to earth, starting out like a ‘bubble gum’ pop song before transforming into a rather fine guitar solo by Dave Addis, focusing on the rather more serious contemporary issue of cyber-bullying. Main songwriter and lead vocalist Michael Whiteman has an effective singing voice with echoes of Trevor Horn of Buggles and Yes fame, particularly on this strange hybrid of rock with a more poppy feel.

One of the main highlights of the whole album is probably The Manic Whale’s finest – and certainly one of their most eccentric – songs, Strandbeest. Inspired by strange mechanical creatures on beaches, created by Dutchman Theo Jansen, Manic Whale evoke such imagery with jazzy staccato sounds, weird synth lines and wah-wah guitar. John Murphy continues to portray the peculiar movements of such creations with a jerky jazz piano section before Addis joins for an appropriately angular guitar solo – I Am the Manic Whale are very skilled at painting musical pictures in the mind with their assured performance.

I Am the Manic Whale seem to draw on various influences and gleefully mix them up imaginatively in their repertoire. If Strandbeest was rather strangely jazzy and even funky at times, Pages, focused on the history of the printed word, displays roots in ’70s-era progressive rock, replete with an acoustic 12-string guitar and flute interlude reminiscent of Gabriel-era Genesis. Michael Whiteman and his fellow band members also show their ability to write and perform more straightforward and catchy melodic rock songs with the optimistic One (Hopeful Song), even if the rather high pitched choral vocals do appear rather a stretch for the band at times. It has to be said that this is a band with only a relatively small number of live gigs under their belt so far, and perhaps that shows a little as although the high quality performances are clearly skilled there are times when it does not quite have the polished sheen that only the experience of numerous gigs can add to a band’s live sound. To be fair, this is a minor quibble as this is the sound of a skilful band in fine form playing good music, that will improve even more with more live shows.

The Lifeboatmen is a dramatic and lovely song based on a true story of heroism which really stands out on the Gathering the Waters album. It is clearly in a style akin to Big Big Train’s narrative songs – indeed, the Big Big Train song East Coast Racer, about the ‘Mallard’ steam train, helped Whiteman realise that he could write songs just about any subject at all… and he really does! It works pretty well live, but shorn of some of the atmospheric sound effects and with a more subtle approach in this live recording it is less compelling, the crowd seemingly surprised when it reaches its rather muted conclusion.

On the whole, the songs played are pretty close to the original album versions, with the notable exception of Stand Up, written by keyboardist John Murphy. On Gathering the Waters this song is rather an epic, 18 minutes long. Interestingly, for this gig The Manic Whale chose to halve the length, presenting this already fine song in this shortened version they have added great impact to this inspirational piece. Commencing with an acoustic guitar and gentle piano the song skips along in a deceptively light way, underpinning the rather more serious lyrics. The declaration explicit in these words indicates some of the faith-based influences on some in this band, but this is not an overtly ‘preachy’ song and should not put off listeners averse to the ‘C’ word – (Christianity!) It’s reasonable to expect that any rational person could identify with calls to avoid apathy and Stand Up to injustice:

“So why do you wait until the darkness comes to your door
For it to bother you?
And when do you learn the world is dark and those who bear the light
Will pay for being true?”

Manic Whale then totally transform the piece from its rather bouncy beginning into a rousing rock number with fabulous crunching guitar riffs and then fluid guitar lines from Addis over great rippling organ from Murphy. This section is a particular highlight for Ben Hartley on drums, pounding out a fluid rock foundation with fancy fills, Whiteman deftly pinning it all down with fine bass whilst singing in loud joyful declaration:

“Stand Up with the love that you’ve found,
Let compassion reign strong…”

This is one of the highlight tracks from this live show, showing this to be a high class band with the chops to rock out powerfully, and understanding that sometimes ‘less is more’, especially in this exciting adaptation of an excellent song. The album ends where I Am the Manic Whale began as Open Your Eyes was the first song Whiteman wrote, for which he started to recruit the band members.  Reminiscent of Supertramp at times, this is an accessible and melodic rock song which concludes the show in rousing style.

We could ask whether after only two studio albums there is a need for a live album from this relatively new band. In all honesty, probably not.  However, this is an excellent document of a good rock band performing well. Most of the songs are not radically different to their original versions but the live version of Stand Up alone is sufficient reason for existing fans to get this release.

Progressive rock fans unfamiliar with this talented, quirky band could find New Forms of Life – Live at The Oakwood  an ideal introduction to their best songs so far, and could then almost inevitably be drawn into the rather peculiar but engaging world of I am the Manic Whale.

[You can read Leo’s interview with Michael Whiteman of I Am the Manic Whale HERE.]

Tags: I Am The Manic Whale

I Am The Manic Whale – Things Unseen →