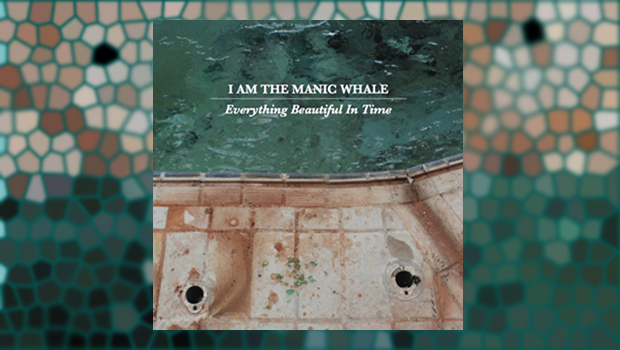 I Am The Manic Whale – Everything Beautiful in Time

And so once again the Prog Band Random Name Generator gets a healthy spin and these five words come together for surely the first (only?) time in human history. For successfully achieving a kind of ‘Prog Googlewhack‘ I guess congratulations are in order!

As the début album from I Am The Manic Whale, Everything Beautiful in Time features songs “about finding the beauty in things that are often not considered beautiful and how this changes with the passage of time”. From the accompanying documentation it appears that the material for the album has been written over a decade or more, although only recorded in the last year. The Whale produce symphonic prog in the Grand Style, “traditional” in construct but they have added a modern edge that serves them well. There is an urgency and overriding enthusiasm to the delivery that is compelling with all of the performances well judged and the high register (but not Jon Anderson high) voice of ‘whoever does most of the singing’ – the website is decidedly lacking in info – excellent.

There is some lovely detail within the lyric of Open Your Eyes, which concerns those who do not see the beauty that is right in front of them, a creatively up tempo construct that grabbed me as soon as it started. The depth and detail employed is admirable and it works particularly well, the frequent use of piano set wonderfully in the expansive mix. As with anyone who loves prog I have an overwhelming admiration for the bands and pieces of the genre’s classic period and it is gratifying that IATMMW do not use their own love to colour the music. This is traditional symphonic prog in style but, to me at least, it does not contain many direct pointers to the past. There’s none of that “Oh, that’s Genesis…Yes…a bit of Crimson…” you all to often find with bands writing in this style. The opening instrumental section to the 16-minute Circles (Show Love) reminds me of Spock’s Beard, but in a good way and it’s all fine so we’ll give them that.

This is a creative and engaging album and one of the best of this type I’ve heard in ages. It has quality written through it like a high-end stick of rock and avoids the pitfalls that many (particularly U.K. based) bands fall into of going for style over substance. The pieces are interesting and melodic with well thought out arrangements and the playing is well up to the task of delivering it. I know there are those who will poo-poo this as being nothing new – and it isn’t – but when it is done this well there is no reason not to enjoy it. Most of the songs feature particularly interesting lyrical ideas, like Pages which looks at the history of the written word from its invention through the illuminated scripts of monks to today’s high speed electronic “copy and paste” world of mass communication where:-

“I’ve a machine in my hand a thousand times faster than the Bombe that broke Enigma’s code
I could use it to read every book ever written
But I use it to look at pictures of kittens and play mind-numbing, sweet-crushing games.”

The reality of modern life in a nutshell.

But there are oddities; Princess Strange is quirky and a little bizarre. Set very much in the Internet Age of teenagers (and the not so teen…) and the damage that social media can do, it’s a valid warning but one that is certain to go unheeded. The hard-nosed cynic in me would generally baulk at the “chorus” to the first part of Circles (Show Love) – “Love… love… love to everyone in creation” – but it works so no complaints. A later chorus section feature of “Going round in circles is totally unhelpful” could also become cheesy and a bit naff but the accompanying vocal harmonies and fugue-like instrumentation passes muster, acoustic instruments mixing with electric to make for a highly engaging and detailed sound as the piece moves easily from one texture to the next. Circles… is a multi-movement suite that remains both interesting and uplifting throughout and the band should be praised for their passionate approach and precision.

The naive acoustic sweetness of The Mess, a sincere plea for children to remain just that for as long as they can, would be a cloying, er, mess in lesser hands. Here it is an endearing listen that certainly resonated with this father whose little girls are no longer that, particularly the last line of “But I pray every day you’ll find someone who loves you as much as I do”.

Concerned with the passing of time, Clock of the Long Now starts in more subdued fashion before moving in a jaunty jazz direction built on electric piano, soon settling into a Symphonic groove. Some of the vocals appear a little wayward with the singers struggling slightly here and there but the writing and playing ensures that this doesn’t become a major issue and the final section is superb. Finally, the longest track on the album, a quiet piano intro opens the four-part Derelict, under the Latin sub-title Et frangentes circa domos intrans (Breaking and Entering) an urban explorer accesses an old property to which the ravages of time have clearly been cruel. The largely instrumental end to this part is good indeed with the slightest hint of Genesis about it. The second part describes the property in more detail, a ’50s leisure complex reinvented in the ’80s but subsequently abandoned and left to the elements, contrasting the now with how things were in its prime. The third part describes the beauty to be found in the decay (as seen in the cover image) while the final section recaptures some of the phrases from earlier in the album to round the whole thing off nicely. As a journey this long-form piece is a particularly satisfying example.

The mix of instrumentation works for the benefit of the songs, as it should, with a few flights of instrumental dexterity to flavour the stew. At nearly 75-minutes it’s a large chunk of music to get your head around but it is not a difficult listen and remains thoroughly entertaining throughout so it has to come highly recommended to anyone with a liking for grand scale symphonic constructs.

Tags: I Am The Manic Whale

I Am The Manic Whale – Things Unseen →