With many thanks to Martin Reijman for his photos.
[You can view more of his images at www.martinreijmanimages.com]

There are plenty of extraordinarily good bands of real quality around at the moment but there are few that take things to the level that these two do and the promise of such a wonderful evening of music from such idiosyncratic European bands meant that getting a ticket was a complete no-brainer.

There really should be more of this kind of event but these days they are conspired against by a combination of the state of the live music scene in the U.K. and simple economics. With support from Prog Magazine and The House of Progression, the indefatigable Nellie Pitts of The Merch Desk deserves a massive ‘tack/merci’ for making this tour happen at all. Spending months in the planning and execution of this five date tour, she has hopefully exposed these two brilliant bands to people who would otherwise not have had the chance to experience them live. And live is where both really come to life; the albums are great but it all just comes together on stage and both bands blossom into entities of true wonder.

So, after a lengthy period of looking forward to it the night had finally arrived.

Having started the tour the night before in Southampton and with subsequent dates over the weekend in Manchester, London and Bilston, The Globe in Cardiff was the venue for the second night. The sightseeing detour to Stonehenge on the way up from the South Coast hadn’t delayed things too much and everyone had successfully arrived in Cardiff but the expected stage time of 7 o’clock came and went as soundchecks continued, a number of eager fans patiently waiting outside in the Cardiff cold. Not a problem and we were all inside by half past 7, beer purchased and a table in front of the stage secured. From the start there was a healthy attendance but this soon swelled to a very respectable turnout which was pleasing to see on a weeknight and testament to the quality of the bands on the bill.

The Moon Safari frontline of Simon Åkesson, Petter Sandström and Pontus Åkesson soon sauntered onto The Globe’s good-sized stage and opened with Lover’s End, Pt.1, guitar and keys combining beautifully to support Sandström’s voice and 12-string. After this melodic intro the other three band members appeared and the full might of Moon Safari ripped out of the speakers with a second track from the Lover’s End album in the shape of A Kid Called Panic, initially too loudly but this was soon rectified and after the first couple of songs the levels were about right and remained so for the rest of the evening. 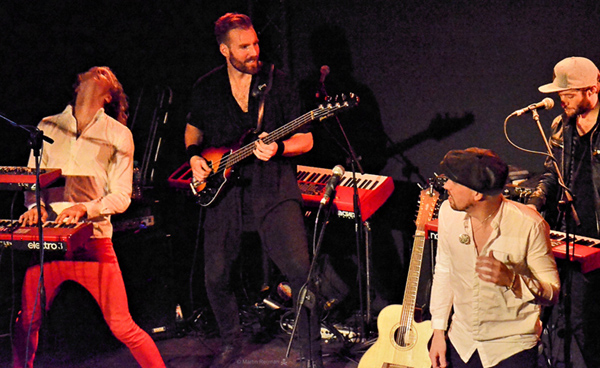 Anyone familiar with Moon Safari will be aware of their sublime vocal harmonies coupled with gorgeous songs that drip melody whilst retaining enough prog dynamics to keep the purists happy. On record I sometimes find their songs a little too sweet for my taste but live they are a very different proposition, complex rhythms from the pounding bass and drums driving the music along and allowing keys and guitar to fly, swirling around the lovely vocals which lie at the core of Moon Safari’s music and were so superbly delivered tonight.

The current state of the mainstream music industry means that it is unlikely that the extraordinary talents of Moon Safari will ever be widely heard which is a real shame as the right exposure would do them an incredible service. Both of these bands have an accessibility within their complex songs that would be sure to gain them wider recognition given the opportunity, but despite TV shows being a marketing man’s wet dream the makers of these programmes seem to have their own agendas and incredibly few put the music first. I would love to see either of these bands turn up on Jools Holland’s show for example and see what reaction they get but, unfortunately, that is no doubt a forlorn hope.

Moon Safari’s set continued with a trio of tracks from their most recent album, Himlabacken Vol.1, Petter on top form sharing the vocal leads with Simon Åkesson whose animated performance was a fine addition to the band’s stage presentation as he leapt around behind his rig. The stage was big enough to allow all of the band sufficient space, Petter free to move from his mic when not singing. The acoustic elements of their music and the vocal harmonies lead to a different take on the symphonic sound and although the focus is on the hooks and melodies they more than have the firepower to kick things up a gear or two into breathtaking instrumental sections that bear comparison with the masters of the genre, the use of predominantly major keys underlining the prevailing sense of upbeat positivity. 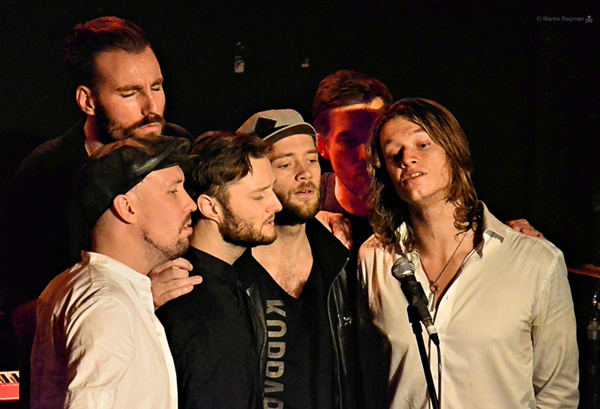 At the end of their hugely enjoyable set they gave us a pair of tracks from their [blomljud] album starting with a perfect rendition of the a capella Constant Bloom which as always brought the house down, the 6-part harmonies delivered with true precision, before deservedly encoring with the lengthy Methuselah’s Children which made for a great way to close. A fantastic show by an excellent band who deserve to succeed and grow.

With two full sets to complete before curfew a quick changeover and Lazuli were in place. Their set at the Summer’s End festival in 2011 – which I had foolishly missed – had certainly impressed those who saw it but I didn’t actually hear Lazuli until they completely destroyed everyone else who played over the weekend at the same event in 2013. Almost instantaneously they became one of my favourite bands – ever. Others have also been drawn in by what makes this band so special and that is why they are a part of this tour; they engage and mesmerize whilst maintaining a very humble and playful attitude. 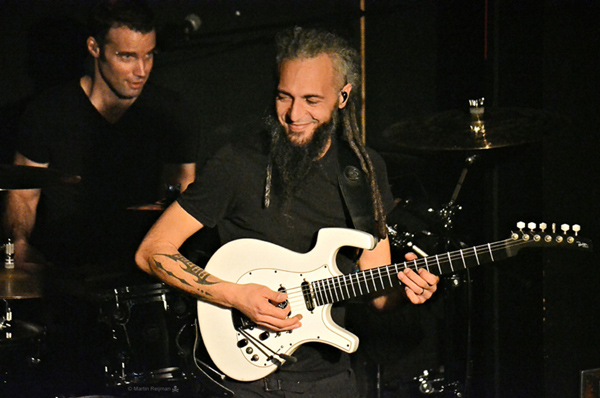 ‘Unique’ is a word that is bandied around far too often but if ever a band deserves to be described as such it is Lazuli. Led by the Leonetti brothers they cover a multitude of styles and textures, Dominique’s astonishing vocals leaping to unimaginable heights as if by magic while Claude’s Léode (a one-of-a-kind instrument developed after the guitarist lost the use of his left arm in a motorcycle accident) is at the centre of everything. The guitar stylings of Gédéric Byar take things in other directions and give it a different finish that couples brilliantly with the rhythmic approach of drummer Vincent Barnavol and keyboardist Romain Thorel, the latter also delivering the bass parts via his left hand. The quality of the songs, all sung in French, is wondrous to start with but weave in the magical instrumentation and things are lifted to a whole new plane, industrial and ethnic rhythms hypnotizing the listener and making even the most arthritic prog head want to dance. You don’t see that very often…

They opened with Déraille, first track on this year’s Tant Que L’Herbe Est Grasse, a track guarenteed to get an audience on side. The first time I saw Lazuli I was not placed well enough to see exactly what Claude was doing with the Léode. Tonight was a different story and he completely drew me in as his playing switched from lead one minute to sinuous textures the next. Dominique’s vocals were as spot on as the instrumentation, the whole producing a very organic sound with dance rhythms enveloping and captivating the band as much as the audience. The intensity of Lazuli’s music is at odds with the humility with which it is played. No strutting and preening for these guys and they all seem genuinely surprised by the warmth of the reception. This down to earth approach is key to Lazuli’s appeal as it serves to accentuate the dazzling skills and unique presentation. Barnavol, who is superb all night, moves from drums to Marimba and then to Djembe while Thorel takes over the kit for Le miroir aux alouettes. There are smiles all around the stage as the music moves them too, Domi spinning and dancing whenever the opportunity arises. Elsewhere the theatrical delivery of Film d’aurore sees a hand-held light illuminating his face in sinister fashion as he sings over an industrial backing – simple but very effective. Getting it right is what it is all about for Lazuli which is why you could clearly see their pain when technical difficulties started to creep in. 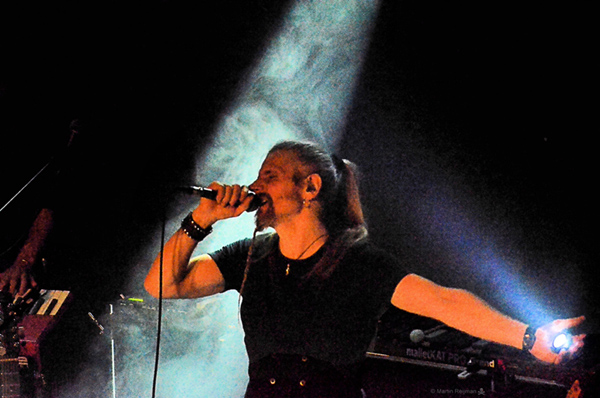 Halfway through the set the band are completely on fire but Romain’s bass patch is clearly feeling the heat and expires. While he and Claude attempt resuscitation we get some impromptu Hendrix, Byar displaying his masterly pedal technique through an impromptu Voodoo Chile, but soon the Léode drops out too and in the gaps between repairs, with muttered French discussion going on in the corner, Domi has to speak to the crowd more than he would have wanted to. Given his limited English I’m sure that he would not have chosen this moment to develop his spoken language but more power to him for attempting it and he pulled it off with aplomb, endearing himself further to an audience that was already completely on side. The bass returned but dropped out again, Romain looking completely exasperated when his French Horn packs up too. You could almost see the beads of sweat forming on Domi’s forehead but do you know what? It really didn’t matter, this was still one of the best sets I’ve ever seen, the issues failing to detract from a performance that was as stunning as I could have hoped for. Very few bands could have pulled this off. Lazuli kept things going with an acoustic number from Domi as the rest of the band clustered around the keys and repairs were feverishly completed.

With everything functioning again they stampede to an uproarious finish. Encoring with On nous ment comme on respire, Domi adding to the stew of sound flavours with mandolin, before the finale which came as no surprise to those who had seen this wonderful band before, the marimba dragged forward as the whole band took their places for the de rigeur showstopper that is 9 Hands Around the Marimba incorporating Peter Gabriel’s Solsbury Hill. Stunning as always the evening ended with rapturous applause. 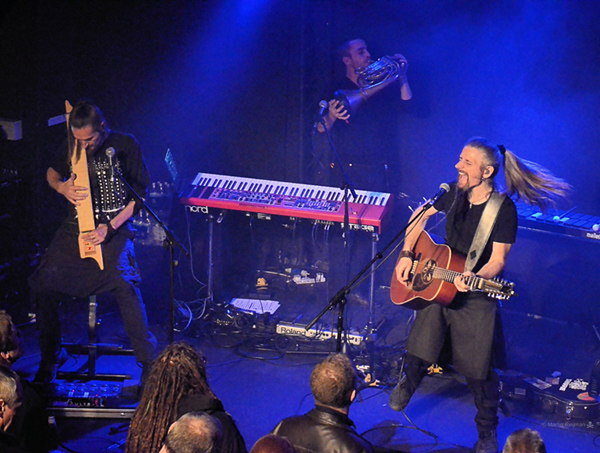 At the end I took the chance to have a quick word with Domi to congratulate him on a stunning performance. The first thing he does is apologise for the technical problems: this self-effacing attitude is never far away with Lazuli.

Lazuli is just so special and I urge everyone who is yet to be charmed by them to give them a listen. If the music industry wasn’t so screwed up stadiums would beckon but for now those of us who have already discovered them get the opportunity to enjoy them at close quarters in tiny clubs. I know which I’d rather but I wouldn’t begrudge them the success that they so richly deserve. A support slot with a major band would be great for them but I doubt anyone would be too keen to go on last after seeing what they are capable of; the intensity and depth of sound is almost overwhelming.

A superb evening and a huge thank you to the bands and all those involved in pulling it together. All this for £15? I’d call that a bargain. Hope you didn’t miss it as who knows when it’ll happen again.

This revolution should most definitely be televised.