What does this band actually have to do to increase its profile?

Seriously, they play stunning show after stunning show to rapturous receptions, supported Fish in packed houses for a long string of dates at the end of last year, yet they still only draw about 100 – and that’s a top end guestimate – to a gig in a major city with a vibrant music scene. What the hell is going on!?

Well, it isn’t the fault of those who did turn up to support them most vociferously, or indeed the band as Lazuli put on yet another jaw-dropping show, crammed full with dazzling performances from everyone involved, captivating theatrics and heart-warming enthusiasm. What more could anyone ask for?

I’d better lay out my cards: from the first time I saw Lazuli in 2013 out of the blue they took their place amongst my favourite ever bands – a most unexpected development – and that continues to be the case. Best put your wellies on as I am likely to gush like a broken fire hydrant. However, this is not empty hyperbole – Lazuli are unique and the real deal. 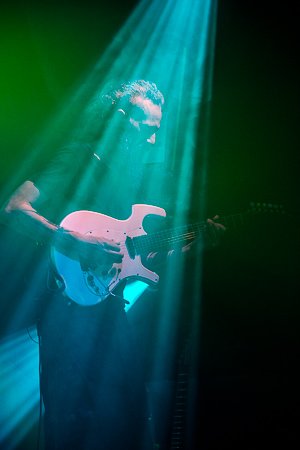 With no support, Lazuli arrive on stage at half past 8 and after the beautifully delivered and gentle intro of Le temps est à la rage, which introduces the wonderful voice of Dominique Leonetti, the energy ramps up and the small multitude present start to move – there would certainly have been far more dancing if it wasn’t for the über stickiness of The Fleece’s cobbles! Domi’s vocals are simply superb; expressive, emotional and capable of soaring to some startling high notes. The crowd are immediately on side and the band respond, amid a lovely sound that has clarity and none of the soupy volume that ruins many gigs in such small halls, and you can easily pick out all the individual instruments. A rare trick with so much going on. Vincent Barnavol’s drums are sharp and driving as he puts in a tour de force shift all night. The keys of Romain Thorel are vibrant, filling out the sound and adding detail, plus the thumping bass lines. Gédéric Byar’s be-dreadlocked form cuts an imposing figures as he reels off slashing chords and dextrous runs. Finally a seated Claude Leonetti, his unique and otherworldly léode doing all manner of strange things that add to the mesmerising swirl of sounds. Just delicious. It can be delicate, massive or check in at any point in between, and they always deliver it with style.

The music sounds like no one else. There’s groove with a percussive world music vibe behind it all that is not overplayed, it simply becomes part of the natural flow of Lazuli’s music, North African rhythms abound with industrial density and on occasion Domi is swept away on the sheer primal energy of it all, spinning and dancing like the possessed soul he clearly is in those moments, always with a broad grin on his face. Their enthusiasm is infectious and the camaraderie uplifting. They clearly just adore doing what they do and I doubt they’d be that bothered if there were only 10 of us there to watch. 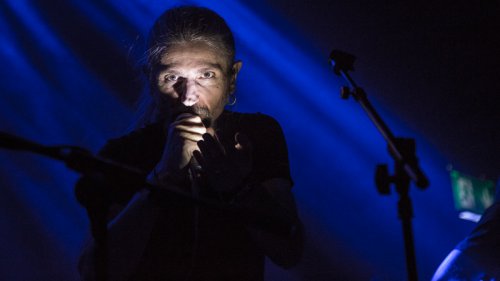 With selections from throughout their career, there is experimentation but the wonderful melodies and accompanying dynamics hold it all together, the natural theatricality in much of the delivery underlining the experience. There’s a pure and entertaining passion for the music. Domi and Romain share a snare drum to beat out interlocking rhythms; Gédéric plays his guitar with a screwdriver (rightly favouring a Phillips), later joining Domi for a guitarist sojourn into the audience to duet; Vincent takes on the marimba and African drum, swapping with Romain who moves to the kit before returning to his station to solo on electronically treated French Horn from which a multitude of sounds emerge, including something resembling a didgeridoo; Domi once again deploys his hand-held light to highlight the sinister Film D’aurore. It’s a spellbinding performance. 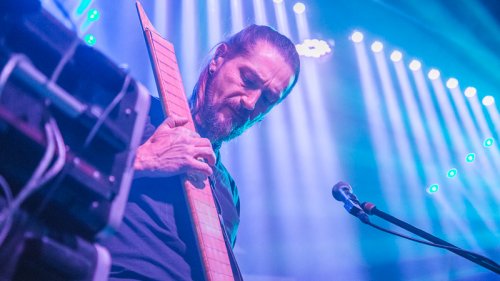 Domi addresses the audience with hesitant English. He is warmly received. Later he resorts to crib sheets in order to properly express what he wants to say when introducing the songs and explaining their meanings. The music is uplifting and energising but they tackle serious issues, such as the the continuing poor treatment of women in the 21st Century, or the rise of the French far right when introducing Le mar du passé. There is also humour in his words and the asides from the rest of the band and he speaks for all of us when commenting that music has no boundaries, a warmly received sentiment. 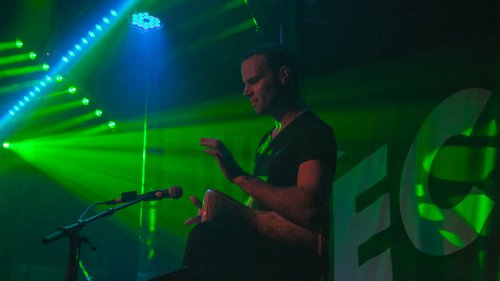 Lazuli are a heavier, groovier, bolder and a far more intense prospect live than on record, and this is where they shine. They did not put a single foot wrong all night and played to perfection. Conventions are thrown out of the window and they are beautifully unpredictable, giving the most entertaining all round performance imaginable and it is the obvious joy they have in playing their music that makes then so special. 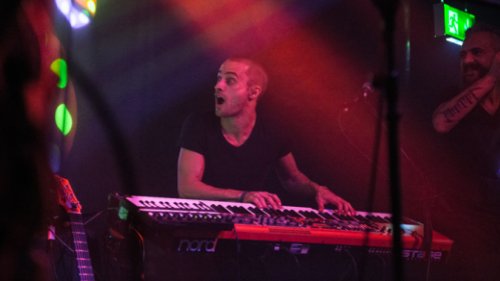 After rapturous applause and a comedic toilet break exit for most of the band they return for the encore, featuring their party piece 9 Hands Around the Marimba, today including their version of David Bowie’s Heroes. Heroes indeed and the perfect way to finish an absolutely fantastic 2-hour show.

That’s it, not gushing, simply a genuine statement of the facts and what this band means to me.

Lazuli are clearly – and rightly – grateful for the support that they have had from the Prog community in the U.K. since their debut show dazzled the opening night of the Summer’s End festival in 2011, but it seems that being linked to the Prog branding is doing the band a disservice. A support slot on a big (non-prog) tour or TV exposure (if such a thing realistically exists these days outside of the product placement brigade) would benefit them hugely. Lazuli need exposure, they could play to just about any audience and impress, they just need to be allowed the opportunity to do just that. I took a young friend along to this show; 25, into his music, likes a variety of things, never heard a note of Lazuli. After the first number he seemed a little dazed – “That was incredible! I’ve never seen anything like that”. Bingo! This is what needs to happen, exposure outside of the 40 to 60 range of the average Prog fan, and that needs to be Lazuli’s future. 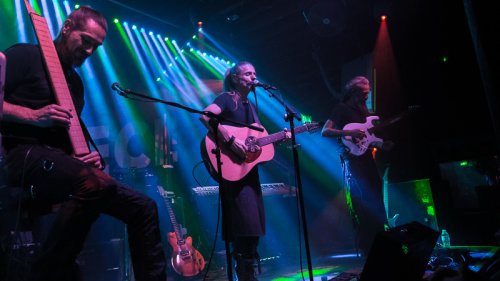 If I never see them at such close quarters again I’ll be totally gutted, but if that means that they get the success they deserve then I’d be happy beyond words. Lazuli are the band by which others should be measured.

[All images courtesy of Mike Evans and used with great thanks.]