Are you sitting comfortably? Then let us begin…

It all started with a scout for U.K. TV musical talent show The Voice turning up in deepest Devon on the trail of much-travelled musical free spirits and partners in life and tunes, Billy Bottle and Martine Waltier. What prompted the producers of this highly kitsch mass consumption TV programme to want to hunt down the duo must be a story in itself, but that will have to remain an imponderable for now.

As you may know, “Billy Bottle & Martine”, as they were billed romped through their version of Snap!’s cut’n’paste disco-rap stomper The Power and gave suitably bemusedly semi-cryptic answers to the panel’s gauche questioning of their perceived “hippy lifestyle” down on the farm. Sometime in the run up to the May 2015 U.K. General Election, the duo had the idea to take the song on the road – or rather rail – across the south of England as a busking duo, stopping off at 49 different locations along the way to London and Parliament Square, at each stop asking folk they met where they thought “The Power” lies in these fractious times. A lot of these encounters were filmed, or at least photographed, and the resulting travelogue formed a video backdrop to tonight’s show.

That is only the half of it! The show, billed as The Other Place, was taking place in the small and homespun Camden People’s Theatre as part of their All The Right Notes festival, described as “celebrating what happens when gigs and theatre collide”. Well, this two hour extravaganza we were about to witness certainly lived up to that billing, played out in front of a full-house audience of around sixty hardy souls on this wet and windy November evening, all of us grateful for an escape from the elements.

The lights dim and the band take the stage. Having watched the intro on the screen over the back of the small stage and the song that followed, and the next short filmed section followed by its musical interpretation, the penny dropped: the actual words spoken by the various interviewees formed the basis of the lyrics to the piece that followed. No mean feat of writing and arrangement on the band’s part, as shoehorning the wildly differing vox pop, both in accent and content into lines that scanned (mostly!) and arranging the other written lyrics around it, and fitting it all to the music or vice-versa must have taken no little skill, not to mention time. 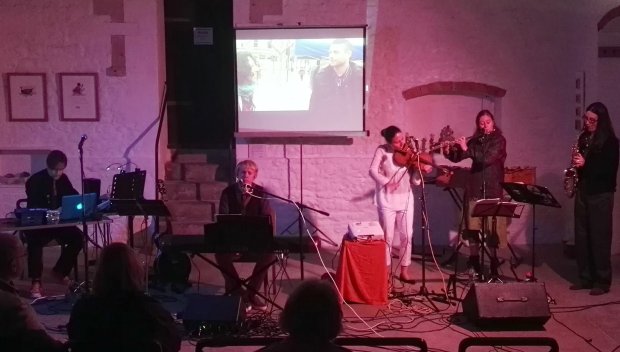 [Luckily for you, dear reader, I took none of my usual blurry snaps, I was so carried away with it all. Here’s a pic from an earlier show, in Frome, incidentally the place where my letter (see below) was written.]

The Great British public in all its diversity, from the dyspeptic to the disenfranchised, from the hopeful to the hateful, from the dynamic to the disinterested, from the activist to the anarchist, from the cynical to the concerned, they’re all here in all their glory.

It all proves that you don’t have to dig far below the facade of “life as normal” to find folk out on the fringes, some in desperate straits. None more so than the poor distressed homeless fellow that Billy encountered in Trowbridge, a truly harrowing encounter that reduced Billy to tears while holding the junkie close, a man mourning the loss of his Dad and coping by losing himself to heroin, injected into a cyst, the only place left. Billy, being the eternal optimist turns this situation on its head, and sees that action is the only way to help those truly at the bottom of the pile.

That was certainly the most moving part of the evening, but there was a lot of humour too, some of it very black indeed. Another homeless guy, this time in Havant combines grim reality with resilient optimism, and reckons the only way to cope is “basically (to) get the fuck on with it”. Havant Man’s song is shot through with angry expletives, something that at first sounds a bit odd coming from Billy, who has always struck me as a sweet-natured soul who would probably say “dash it” if blood was drawn while shaving. Only kidding, Billy! Our Havant hero reckons…

“You can either walk through it depressed
Or walk through laughing of your vest
Guess which one we’re picking?
I couldn’t give a fuck man
I couldn’t give a toss.”
“If I walk down the road and break a leg,
I’m one of them that’s got another one
If I break two then I can crawl
Or go ‘scuse me love can you pick me up (and take me to Tesco)?”

Some of these recorded opinions were transmuted into great lyrics, especially “No to austerity and no to the cuts, we know that fat cats all pay monkey nuts” backed by an anthemic musical chorus. All great players, the band work well as a unit, as the trio of Billy, Martine, and Roz Harding have all played together for some time as part of jazz luminary Mike Westbrook’s ensemble, and the other two are both experienced musicians. Remiss as it is of me to point out a star of the band, I must however give much praise for sax player Roz Harding’s powerful and inspirational playing.

After the first hour, an interval. Not just the usual rush to the bar, impossible anyway due to the tiny space the bar occupied, we were asked to write a short letter to a stranger, which would be opened by a random audience member at the next gig. We were then given a letter from a previous gig, and this is what I received… 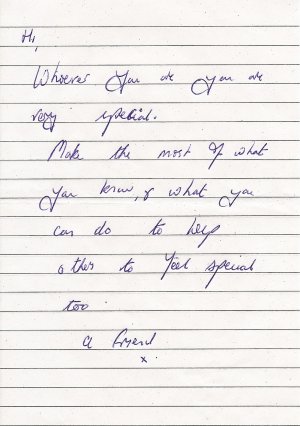 Act II continues with encounters outlining the stark reality that was England prior to the May 2015 General Election, and as a prescient moment for the heavy manners to come in the lead up to the EU referendum, and the toxic post-Brexit landscape that was then but a mere nightmare, this incident in Margate was quoted verbatim over a quietly menacing soundtrack:

“I just met Nigel Farage on North Down Road in Cliftonville in Margate. Which is the kind of street that’s become the focus of the whole campaign here that’s the kind of fault line of the things we’re talking about. And about ten/fifteen minutes after talking to Nigel Farage very politely but firmly telling him that he’s a fascist and we don’t need his kind of people here and telling him that he was causing division where there wasn’t any before, a UKIP branded car, UKIP flags flying, pulled over, the guy jumped out, um, was abusive to me and to Tracy and then punched me in the face.”

The piece ends abruptly at the conclusion of the monologue, spoken by Billy, but delivered initially on film by the young assault victim with a mixture of fearfulness and bewildered shock that this is where we’ve come to.

The tour has now arrived in the capital, and the duo and their cameraman procure the services of a milk float to deliver The Power, in the symbolic form of a pint of milk (Billy Bottle – geddit?) to the gates of Parliament. On the way they come across a London taxi driver. The London cab driver as hard-bitten pragmatist and font of populist skewed wisdom is a stereotype that the protagonist of Plebs lives right up to. To a jerky electro rhythm, Billy and Martine swap our cabbie’s cynical Cockney bon-mots echoing his actual voice on the backing track declaiming “We are merely plebs”, all in a shouty robotic style. Not for the first time this evening, a smile crosses my careworn fizzog.

After trundling round for seven laps of the roundabout at Parliament Square, the significance of which I have forgotten, and delivering the pinta, Billy leads a tribe of anarcho types on Parliament Square Garden in a shoutalong chorus of Power to the People and the travelogue is over. Two more songs are performed and the band receives a rousing reception, bringing a remarkable evening’s experience to an end.

Soundscape and production wiz Lee Fletcher later self-effacingly described the show to me as “little”. Well, it may not have taken up much space or time, to perform at least, but in terms of heart it was the biggest thing I’ve had the privilege to witness in many a moon. The Other Place should be compulsory viewing for the politically disinterested, and indeed those who cannot think beyond their own front doors and vote only for themselves. Sadly, as is the nature of these things, preaching to the converted is one thing, but changing set hearts and minds is something else entirely, but this show certainly has the soul to do it.

Much more info, pictures and vox pop videos can be found at “Don’t Just Vote”.