Music can express so much without words and such was the spirit and magic produced on October 8th in the musical shrine that is the Real World Studios it will be impossible to fully convey in words the feelings evoked by this wonderful event. Multi-instrumentalist Rob Reed, most well-known for his work with Progressive Rock band Magenta and his project ‘Kompendium’, assembled a very talented 13 strong band to perform his two recent successful Mike Oldfield inspired solo instrumental albums, Sanctuary I and Sanctuary II. This was an ambitious undertaking to play beautiful pieces of complex multi-layered music with a multitude of instruments which Rob Reed and his band pulled off skilfully and wonderfully to the delight of a packed studio audience. These performances were filmed for later release, which will allow all those not fortunate enough to have been at Real World to experience the magic created in those iconic studios. This should be a ‘must buy’ for many fans. 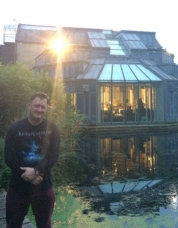 seemed an ideal space to perform these atmospheric and spiritual pieces of music. Sanctuary I Part One commenced proceedings wistfully and, somewhat surprisingly for the keyboard maestro for Magenta, Rob Reed featured on guitar showing his skill and versatility. Reed also showed his skill and versatility later by playing marimba, vibraphones and sleigh bells. Immediately the music spun it’s web and the audience were spellbound as delicate, beautiful sounds traced their enchanting arcs and spiralling eddies through the air. The audience were taken on an exhilarating and bewitching trip as Reed and his band deftly weaved the intricate musical tapestries of the world of Sanctuary.

Reed has been clear about the Sanctuary albums being inspired homages to his musical hero, Mike Oldfield. Apparently he persuaded his parents to buy Tubular Bells for his Christmas present when he was 7 years old, despite the scepticism of the shop keeper at the time! It was that album which sparked Reed’s fascination with and life time devotion to music as he wanted to emulate Oldfield’s ability to play so many instruments and to create music to touch the soul. He eventually took that musical ambition into progressive rock with a continuing successful career with Welsh band Magenta, but he still burned with the desire to emulate his hero. Reed himself states:

‘I don’t know why it took me so long to finally do the obvious, but when I did it was a magical experience…
Finally doing the music I was born to do.’

Of course, none of this musical imagination would be possible in a live setting without an exceptional and inspired band to enable Reed to express his musical dreams. Chris Fry of Magenta beamed with his usual joy in performance on electric guitar, but mainly finely played acoustic guitar. Next to him the more taciturn Martin Shellard featured brilliantly on most of the more complex electric guitar parts, and switching with ease like Chris Fry from acoustic to electric and nylon guitars with bewildering skill. Reed himself also showed a previously largely unseen dexterity on guitar, alongside his occasional forays into more familiar keyboards, and even a rather eerie switch to Vocoder. Behind the guitarists Tim Lewis played a crucial role on keyboards and Vocoder. Lewis had a crucial part in also using the keyboards to play the sections that used recorders and woodwind on the albums, which he did with sensitivity. It was apt that Les Penning, who played recorders on Sanctuary II, was in the audience alongside some other Prog luminary guests from Big Big Train and Tiger Moth Tales. On grand piano Nigel Hopkins subtly threaded glistening ivory laden notes throughout the performance. The rhythmic base for such delicate music came from stage right as Jonathan ‘Jiffy’ Griffiths on drums and Magenta live bassist Dan Nelson showed controlled tempo, intuitive rhythm and significant power when needed.  Young drummer Griffiths particularly acquitted himself well, playing the parts played on Sanctuary II by Mike Oldfield’s drummer, Simon Phillips. 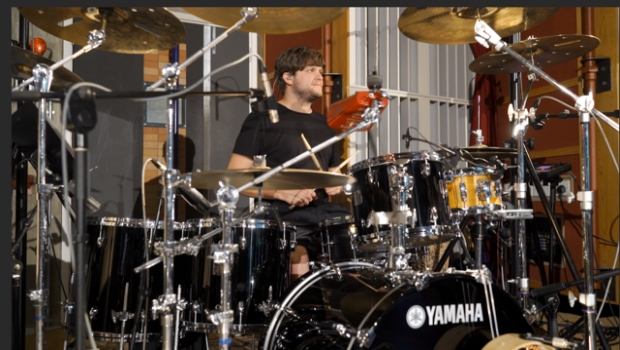 Sanctuary I – Part Two was represented by a short but delightful edit, which Reed calls Albatross. Just when one felt the show could not get any better Rob and the band slid us gently in to the mysterious world of Sanctuary II – Part One, with Lewis particularly busy on rippling keyboards with help from Reed. Throughout the performance Simon Brittlebank added delicate touches and understated but essential percussive passages and interjections on a range of instruments, including marimba, vibraphone, glockenspiel and, perhaps inevitably, tubular bells.

In the background Reed had employed the lovely vocal skills of Magenta singer Christina Booth, alongside her sister Fran Murphy, Lorraine King and Ffion Wilkins. The ethereal quality of Angharad Brinn’s beautiful solo voice on Sanctuary II was clearly felt by Christina who had her eyes closed and was lost in the moment, swaying to Brinn’s voice, and when Brinn ceased Booth opened her eyes and gently nodded her appreciation – one great vocalist acknowledging another.

Alongside the more subtle and acoustic sections Rob Reed and his band could also rock out the more forthright and exhilarating pieces with passion and skill. Nowhere was this better seen than in the rousing finale to Sanctuary II which brought the audience to an immediate and sustained standing ovation, almost as if all those feelings evinced by the music had to be physically expressed.

Rob Reed and his fellow musical magicians returned for a haunting encore of Willow’s Song, from classic British horror film The Wicker Man, referenced by the backing singers wearing some slightly disturbing animal masks! Griffiths contributed subtle but mesmerising tribal drums that underpinned the song. Most notably, Angharad Brinn’s  ethereal voice beautifully soared above the music and through the arched vaults of this glorious setting to provide a suitably spectral conclusion to the inspirational musical alchemy from a very talented band.

Attending such a special event felt like a genuine honour. This special performance will be burned into the memories and souls of all who attended as we left the dream of Real World studios ironically to return to the ‘real world’. Last mention must go to the chief magician Rob Reed, who undoubtedly fulfilled a lifelong dream from seven years of age as he stepped up at one point to play one a particularly personal and significant instrument… Tubular Bells!

(TPA would like to give a special Thanks to Chris Jones).