Two concerts in the same month – things must be looking up in the North-East of England. Well, although Carl Palmer’s ELP Legacy were playing in Gateshead, for this concert we travelled down to the historic market town of Howden (near Goole) – it’s a long story so we’ll leave it at that. So before moving on to the concert itself, perhaps a little bit about the venue. November’s previous concert at Billingham’s Forum Theatre was steeped in the tradition of cinema/theatre, complete with formalised seating and even an ice-cream lady in the interval. Howden’s Shire Hall was a much more informal event and we were greeted at the door, using our names by way of gaining entrance to the show. As this was our first visit to the venue the staff were extremely accommodating letting us know where everything was situated in the building. The evening was also warm and friendly with regulars/organisers running raffles and in general intermingling with the audience.

Support for the evening came from singer songwriter Vinnie Whitehead, armed with an acoustic guitar, he played a few self-penned tracks from across his career, which seems to be heavily influenced by Rap. An interesting set optimised by the pared down version of his single I’m not from America… I’m from Hull – Rap, Yorkshire style. 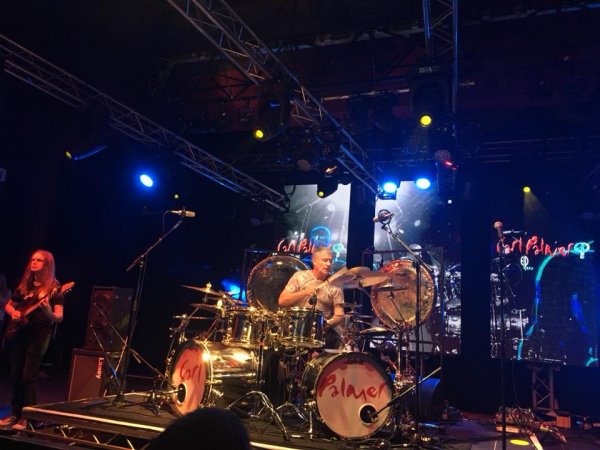 On to the main event and Carl Palmer’s tribute to his sadly missed colleagues Keith Emerson and Greg Lake. Much of the pomp and ceremony of the ELP shows is now missing, as the stripped down stage set-up attests, albeit Carl’s Ludwig drum kit and gongs still take pride of place. The entrance music was perhaps a little lost, however as the band pounded into Peter Gunn it was soon forgotten.

Now I’ve seen various crowd filmed tracks on Youtube, but they seldom capture the music and the audio is invariably poor, so I was curious as to how this guitar based three piece would – or could – reimage effectively classic tracks from the ELP catalogue, so dominated by Keith Emerson’s keyboard wizardry and Greg Lake’s velvety voice. In truthfulness, as the band powered through Peter Gunn, into a breakneck version of Hoedown and as Carl struggled with some stage monitoring difficulties during Karn Evil 9, but still didn’t cause him to miss a beat, I was fairly unconvinced.

Now as the audience applause was rapturous between tracks, I gathered I was in the minority, but as The Barbarian ended and Carl introduced Trilogy I was somewhat bemused. It was already evident that CP’s ELP Legacy was an instrumental affair, so how on earth were they going to pull off arguably one of Greg Lake’s finest vocal melodies? Simon Fitzpatrick and Paul Bielatowicz’s arrangement of the opening section was both creative, touching and marked a turning point in the proceedings for me.

A memorable moment before the band kicked back into action with marvellous versions of The Nice’s America and Bartok’s Knife Edge. King Crimson’s spikey 21st Century Schizoid Man lent itself to the more aggressive three piece format and the arrangement held true to the spirit of the original. Jerusalem sadly didn’t… 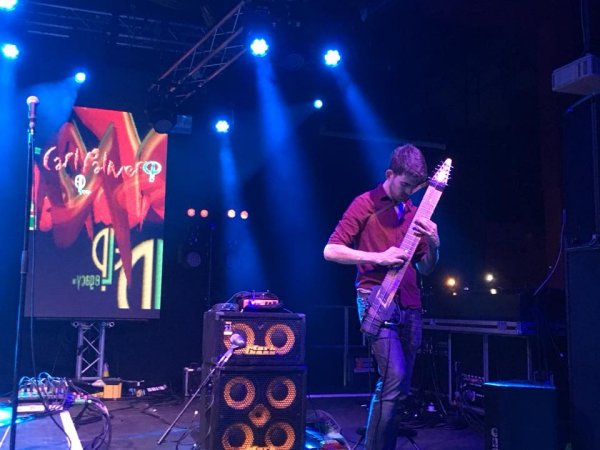 Time for another highlight and it arrived in the form of Take A Pebble, which on paper seems somewhat incredulous. Now by this point in the evening there was no doubt that Simon Fitzpatrick is a fine and gifted bassist, however as Simon and the Chapman stick took it upon themselves to recreate Keith’s and Greg’s roles, it was truly an inspirational highlight.

Throughout the evening Carl popped to the front of the stage to introduce the tracks and offer anecdotes surrounding the pieces and tales of yesteryear. He also encouraged the audience to video the tracks on their phones and post them through their social media networks, which explains why so much footage of the band appears across the net. A brave course of action as some of the more demanding sections did suffer from intonation issues, but hey, this is live music – so bring it on. 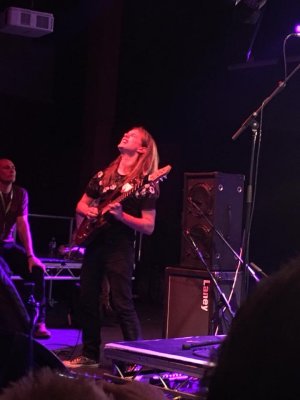 I’ve not mentioned guitarist Paul Bielatowicz who had such an incredibly difficult task taking on the vast majority of Keith Emerson’s parts. He is a gifted player as might be expected, although I did muse that if he perhaps simplified some of the parts he may have been more effective, which he did so wonderfully during his solo section which featured interpretations of Claude Debussey’s Clair de Lune and Arabesque No 1…

No Tarkus, but rather ELP’s full version of Mussorgsky’s Pictures at an Exhibition – and a damn fine version it was too, from the delicate Promenade, through the razor-sharp punctuation of The Gnome, another splendid arrangement of The Sage from Messrs Bielatowicz & Fitzpatrick, the rollicking Blues Variation, the growling fuzzed bass opening the Hut and concluding with the immensely powerful The Great Gates of Kiev.

Now I haven’t mentioned Carl much, have I? Well it’s been a few years since I last caught ELP, but I can assure you he has lost none of his prowess. Considering he had been on stage for some considerable period by the time we got to Fanfare For The Common Man, and had certainly given it his all, you just had to look on in awe at the stamina of the man.

And there was still the drum solo!

Old hat? Well that’s as maybe but the anticipation from the audience was palpable. The fanfare heralded the track, the band played, but very soon they would leave the stage to Carl. Always the entertainer he powered, he rattled and he rolled, he amused and bemused as he tinkled every cymbal, every piece of hardware and every drum in a masterful display of showmanship and skills par excellence. I don’t particularly care for drum solos to be truthful – this one however was an exception to that rule. 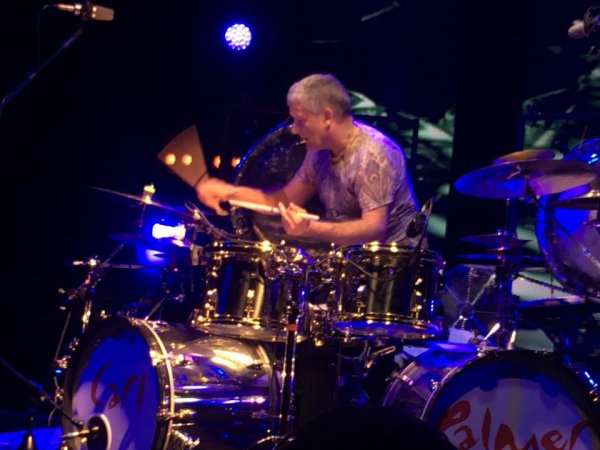 So the final curtain as B. Bumble and the Stingers’ Nutrocker brought the evening to a raucous finale…

My first ever concert was Emerson Lake & Palmer, some forty six years ago and my companion that evening so long ago was John Spink, so an especially enjoyable evening as we teamed up again for this show.

Carl Palmer’s ELP Legacy is a fitting tribute to his former band mates and one that offers a different slant to the template. I was unsure at first and took a little convincing, but there were no doubts left at the end of the night… 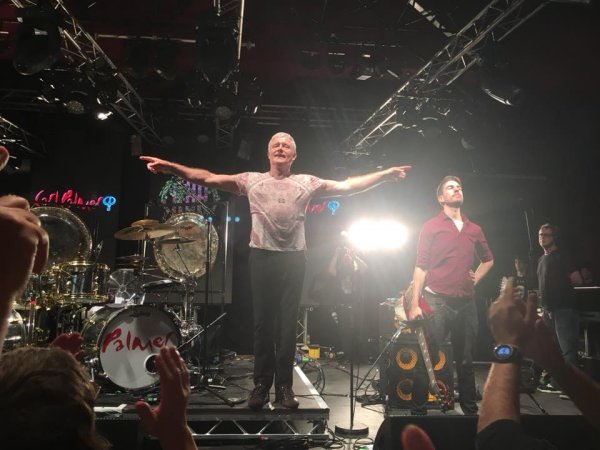 [With photos by Leo Trimming, taken at Carl and his band’s recent show at HRH Prog in Pwllheli.]