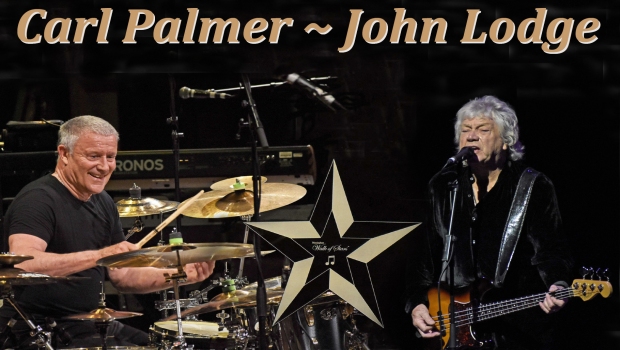 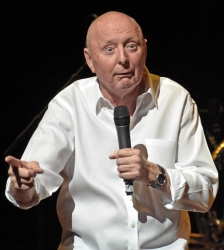 The City of Birmingham has a long history of recognising its famous sons and daughters on the Walk of Stars along Broad Street in the city centre. Carl Palmer and John Lodge are the latest in a long line of Birmingham’s musical greats to be honoured and were presented with replicas of their stars during a special concert at the city’s Symphony Hall.

The Birmingham Night of Stars charity concert, which raised funds for the Birmingham Children’s Hospital, was hosted by local comedian and TV personality Jasper Carrott. There were also short sets by Tony Christie, still looking for the way to Amarillo, and by tribute band Strictly Abba.

Born in the Handsworth area of Birmingham, Carl Palmer was a product of the prolific music scene in the city before leaving to join Chris Farlowe and the Thunderbirds at the tender age of 16. Three years later Carl had a brief spell with The Crazy World of Arthur Brown before he and keyboard player Vince Crane left to form Atomic Rooster. Soon after, Keith Emerson invited him to join his new ‘supergroup’ and Emerson Lake & Palmer was born, becoming one of the most original and distinctive progressive rock bands of all time with much of their work arrangements of, or inspired by, the classics.

In the 1980s Carl played alongside other prog legends including Steve Howe and John Wetton in another ‘supergroup’ Asia and with Keith Emerson and Robert Berry in the short-lived 3 project. ELP reformed in the ’90s for two more albums. Emerson and Lake both passed away in 2016 and, since then, Carl has worked hard to keep their memory alive with his Carl Palmer’s ELP Legacy tours.

Robert Berry, who’s 3.2 The Rules Have Changed album also pays tribute to Emerson, explained Palmer’s style which he replicates on the album: “Carl’s drumming surrounds the melody and the moving keyboard parts. I recognise that about his style, he’s not just a straight beat-player, he plays with the music. It’s a little more musical, a little more progressive.”

For his ELP Legacy show, Carl has put together a 3-piece with lead guitar replacing Emerson’s unique keyboard style and, for the Night of Stars the trio played a short set of four tracks, beginning with the lively Hoedown and Carl Orff’s dramatic Carmina Burana.

The band included Carl’s long-time ally Simon Fitzpatrick on 6-string bass and, making his debut with Carl, Simon’s twin brother James on lead guitar. “It’s great to be live, isn’t it?”, Carl told the audience, “I don’t get to play Birmingham very often but now I’ve got a Star!” He looked to the sky and dedicated the performance of Fanfare For The Common Man to his late band mates Emerson and Lake who, as a trio with Carl, had attained legendary status.

Fanfare became a masterclass demonstration of Carl’s talent and versatility on his kit. The Fitzpatrick twins left him alone on stage for a mesmerising display which brought the audience to their feet. The trio completed an all-too-brief set with their version of the Tchaikovsky-based melody Nutrocker.

Presenting Carl Palmer with his Star award, the Lord Mayor of Birmingham’s representative Councillor Anne Underwood said, “That was amazing. I don’t know where you get the energy from.” She also asked how many drum sticks Carl breaks in a year. “I don’t break that many”, he replied, “they wear out. Tonight a tip came off one.” With that Carl retrieved the stick from behind his drum kit and gave it, as a souvenir, to a lady in the front row. 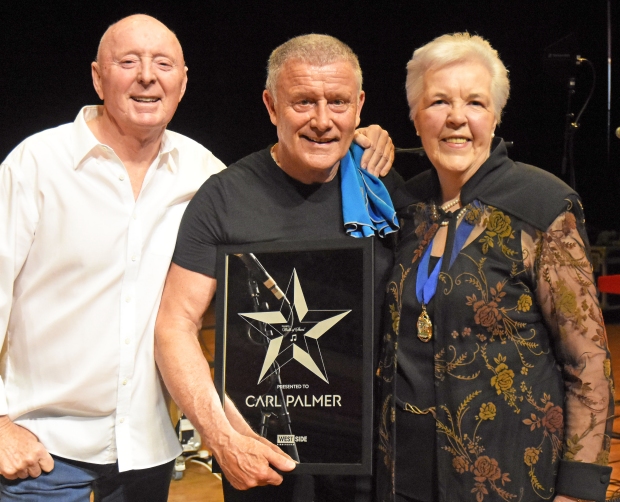 Afterwards Carl told me how thrilled he was to be recognised by his home city. “It’s always nice to be respected and honoured by where you were born. I left here when I was so young, so to come back and get this… I’ve picked up lots of awards throughout my career and this one will mean the most because this city gave me a chance and it gave me a beginning and sent me off into the world. Now I’m back here, thanking it. It’s been lovely.”

Following the interval, and a short set by the tribute act Strictly Abba, Jasper Carrot described John Lodge as one of his closest friends for over 40 years. “He writes, plays bass guitar and is with one of the best groups we’ve had in Birmingham!”

John was born in the Erdington district of Birmingham and first met Ray Thomas at the age of 15. Together they formed the group El Riot and The Rebels which became well know on the flourishing local music scene. In 1966 Ray invited John to join his current band, the once successful, but by then ailing, Moody Blues.

The following year the Moody’s recorded the landmark album Days Of Future Passed which would change their lives and set the musical path, not only for the Moody Blues but for many of their contemporaries and generations of musicians that followed.

Seven stunning albums in a six-year period made them a global success. During a mid-seventies hiatus John also recorded the Bluejays album with fellow Moody Blue Justin Hayward and a solo album Natural Avenue.

The Moody’s soon returned to the studio and it would be 38 years before John returned to the studio for his follow-up solo album 10,000 Light Year Ago. In the meantime the Moody Blues, now comprising of John, Justin and drummer Graeme Edge, have regularly toured across the U.S., where they still have a huge following, together with occasional dates in the U.K.. At the time of writing John is on a short 4-date U.K. tour alongside this awards evening.

After a small technical delay, John and his band opened with Moody Blues favourite Stepping In A Slide Zone and continued with a significant portion of the set from his U.K. tour. This included tracks from across a career stretching back over 50 years, from his contributions to Days Of Future Passed (Peak Hour and (Evening) Time To Get Away) to In My Mind and Get Me Out Of Here from his solo 10,000 Light Years Ago album.

“It’s a long way from Birches Green, in Erdington, to Symphony Hall,” said John, “but I made it! The latest album I released was Live from Birmingham Town Hall. It was on vinyl and I gave it to my grandson, ‘Here’s Grandad’s new album.’ He asked what he could play it on? So I had to go and buy him a record player. ‘What?’ he asked. ‘And I have to turn it over after 15 minutes to play the other side?’”

Introducing the late Ray Thomas’s Moody Blues song Legend Of A Mind John recalled their first meeting and the special friendship that followed. “I was getting on the bus when I was 15. I’d learned the chords on my guitar. There was a guy sitting on the luggage rack and I recognised him. ‘Don’t I know you from the skiffle band at the church hall?’ I asked. ‘Don’t you sing with them on a Sunday night?’ He said ‘Yes, I’m Ray Thomas. Shall we form a band?’ and that was El Riot And The Rebels. It’s good to see a couple of old friends from the band here tonight.

“Ray and I grew up together, went on holiday together with our families. Our children and our parents all became friends.

“We were inducted into The Rock And Roll Hall Of Fame. Thank you to every one who voted. Ray rang me before Christmas and said ‘Rocker’, that’s what he used to call me, ‘Rocker, does this mean we are famous now?’ He said he was not well and would I pick up the award for him. This (Legend Of A Mind) is a very special song of Ray’s. The Moody’s probably won’t play it again and I want to keep Ray’s music alive,” John added, looking toward the heavens. Midway through the song John also mimed Ray’s flute solo.

John’s solo touring band includes Duffy King (guitars), Billy Ashbaugh (Drums), Jason Charboneau (cello) and Alan Hewitt (keyboards). Indicating towards Alan, John told the audience: “A few years ago when we were in Chicago, it snowed and we had to miss a concert, I said to Alan let’s sit down and write a song together. This has nothing to do with being here tonight, it’s called Get Me Out Of Here.”

Recalling his collaboration with Justin Hayward, John said, “In the ’70s we made an album together called Bluejays. Sometimes at the lowest points of your life, and the highest points, music comes along and it makes you happy. This song (Saved By The Music) is special to me.”

To conclude his set John returned to his notable Moody Blues catalogue for two of his finest compositions Isn’t Life Strange and I’m Just A Singer (In A Rock And Roll Band). John Lodge is far more than that and his home city of Birmingham recognised that on this special night.

Congratulating John on his award, Councillor Anne Underwood added that she was delighted that someone from Erdington had conquered the world! 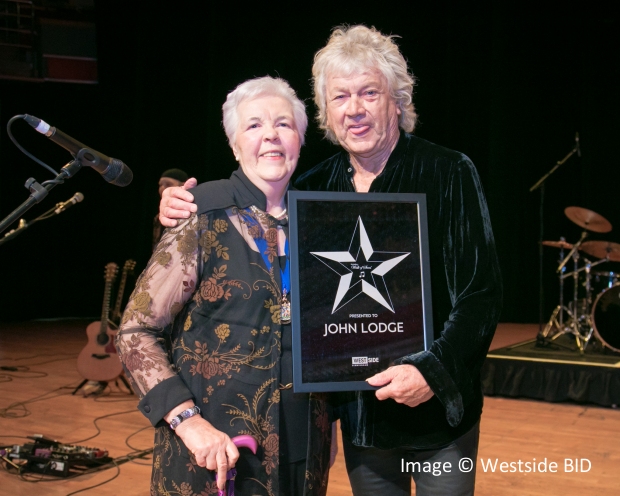 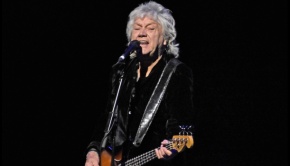 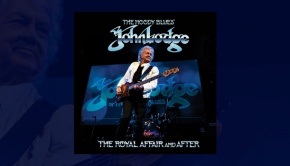