After two years of waiting, as well as venue and line-up changes, HRH Prog XI finally took place over the weekend of April 2nd and 3rd at the O2 Academy, Sheffield. It was a memorable, well-attended festival with many highlights. Here, collected together, are my live updates of the event, including some wonderful photography by Stan Siarkiewicz of ProgPics. 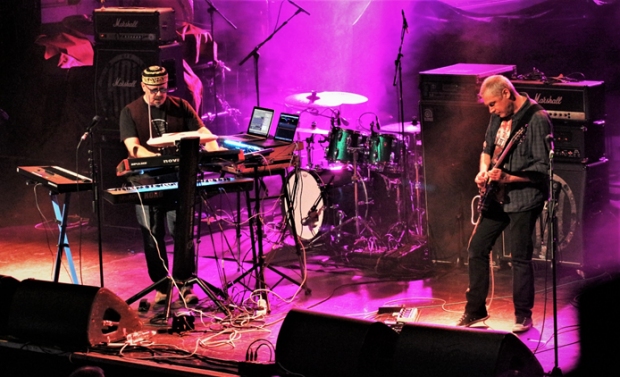 MonkeyTrial kicked off proceedings very well. Appearing as a duo, Clive Mollart, on keyboards, theremin and programming, along with Shaun Bailey, on electric guitar, wove their ambient, electronic prog soundscapes ‘for imaginary locations’ for the early festival audience.

Hypnotic, atmospheric and often quite rhythmic, with a mid-period Tangerine Dream feel to the compositions, and echoes of Pink Floyd as well. Clive’s intricate sonic foundations were supported by some lovely, soaring, Gilmouresque guitar runs from Shaun, and overall the musicians charmed and soothed the festival. 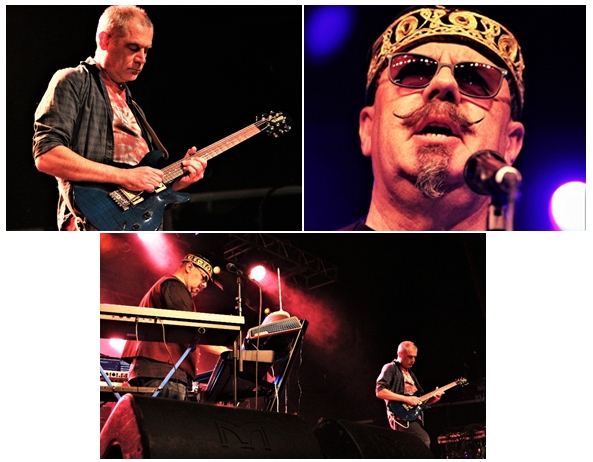 They only had time to play A Sense Of… and Viking at First from their current release Vikings, and finished with Proteus from 2016’s Comma5, but these lengthy compositions worked very well. Ambient prog fans will find much to enjoy from this band. 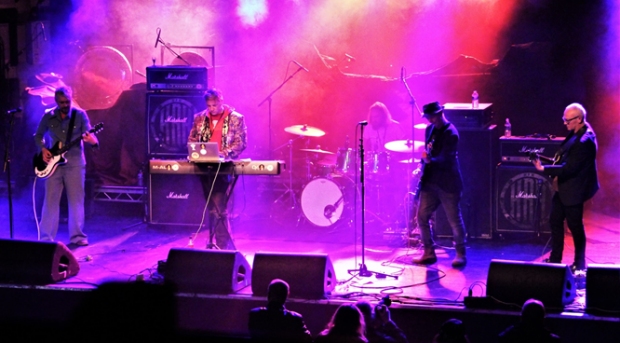 Next up were Moon Goose. This musical collective from Hay-on-Wye in Wales delivered a fresh and vibrant set of psychedelic/space rock. Driven by a heavy bass rhythm and keyboard wash, with spritely drums and guitars adding texture, they were an anarchic, punky, cosmic amalgam of Hawkwind and Can, with hints of Canterbury scene/Gong whimsy and even echoes of early Barrett-era Floyd. With tracks quirkily entitled Sexbots, The Mysterious Coffins of Arthur’s Seat and Edible Druid, they clearly don’t take themselves too seriously, but by the end of their set, when they played Trains, they had built up a good head of steam. 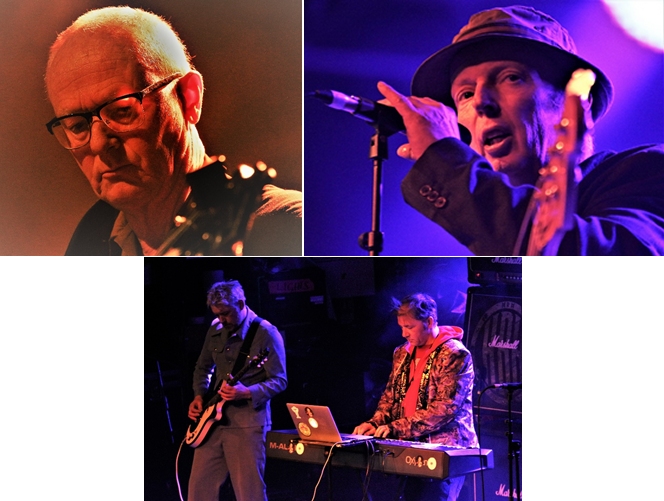 The ‘psychedelic/space rock’ theme continued with Psychic Lemon. Appearing as a duo with Andy Briston on guitar and effects and Martin Law on drums, they created a dense and insistent sonic attack of dark psychedelic and krautrock flurries. Martin’s tribal drum beats and Andy’s effects-laden guitar soundscapes echoed around the hall in the mid-afternoon slot as they played their extended jams, from Seeds of Tranquillity, through Death Trip Britannica and ending with Satori Disko. An atmospheric, contemplative performance overall. 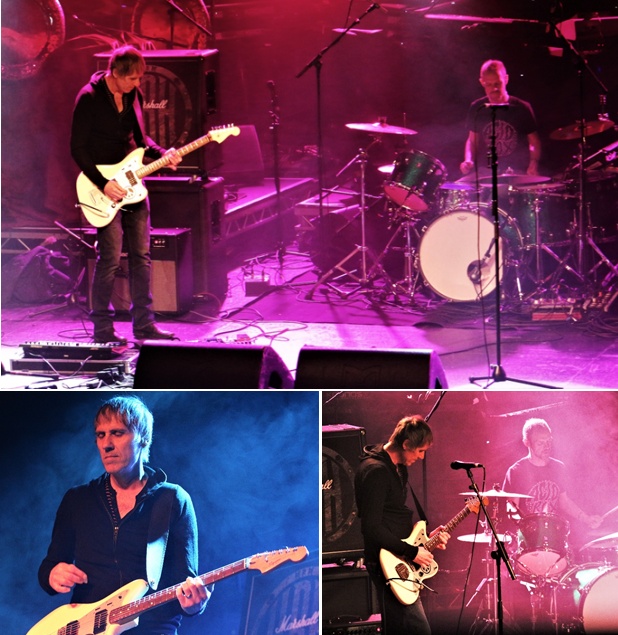 THE FIERCE AND THE DEAD 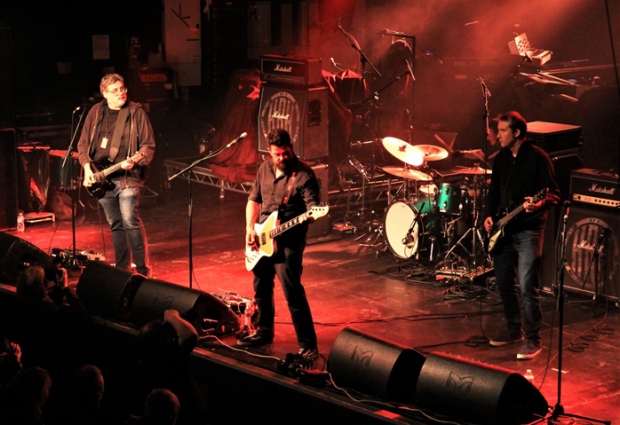 The pace picked up considerably with the arrival of London’s instrumentalist proggers The Fierce and the Dead. Led by Kevin Feazey on bass guitar and a throbbing double guitar attack from Matt Stevens and Steve Cleaton, over Stuart Marshall’s pounding drums, their powerful and energetic set showed how they defy categorisation, with a heady mix of prog, post-rock and prog metal, and touches of stoner rock and psychedelia.

Overcoming sound balance issues at times, the band tore through a dynamic set, largely from their 2018 album The Euphoric, with the likes of Truck, 1991, Verbose, Dancing Robots and Parts 7 & 8. During the performance they surprised the audience by unveiling two new songs with vocals – Wonderful and Golden Threads, which both impressed. Ending with a rousing 666…6, their joy at returning to live performance after so long was clear to see – not least by Matt’s beaming smile at the end. 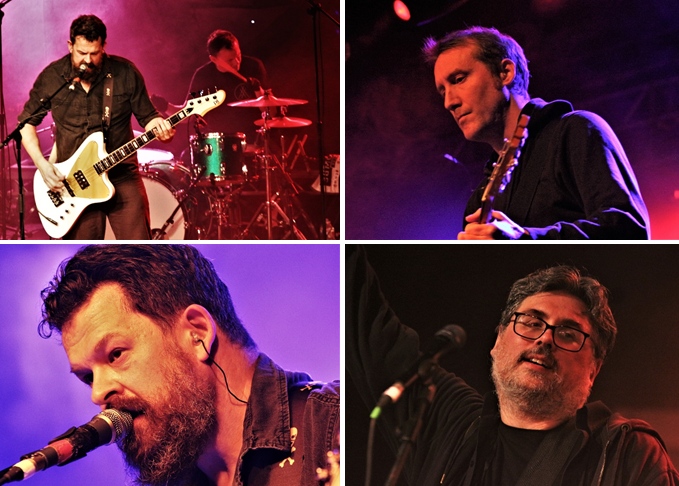 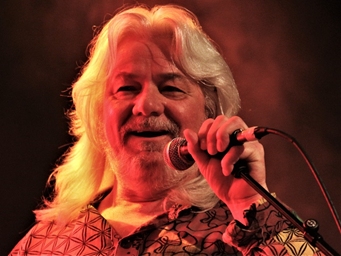 Blackpool’s Nth Ascension raised the prog quotient for many in the audience in the teatime slot, with a highly enjoyable slab of old school neo-prog. Melodic rock and symphonic prog elements intertwined – reminiscent of early Magnum at times, as well as bands from the ’80s neo-prog era.  They started strongly with Fire in the Sky from their recent Stranger Than Fiction release, before going back to an earlier period with Fourth Kingdom.

Vocalist Michael-Alan Taylor looked resplendent centre stage, with strong support from Martin Walker on guitar, with sons Gavin and Craig keeping a solid rhythm throughout.  Darrel Treece-Birch added proggy sparkle on keyboards, especially during epics such as The Gathering, End of Days and Forever, before the band closed their set with an impressive Kingdom Keys. 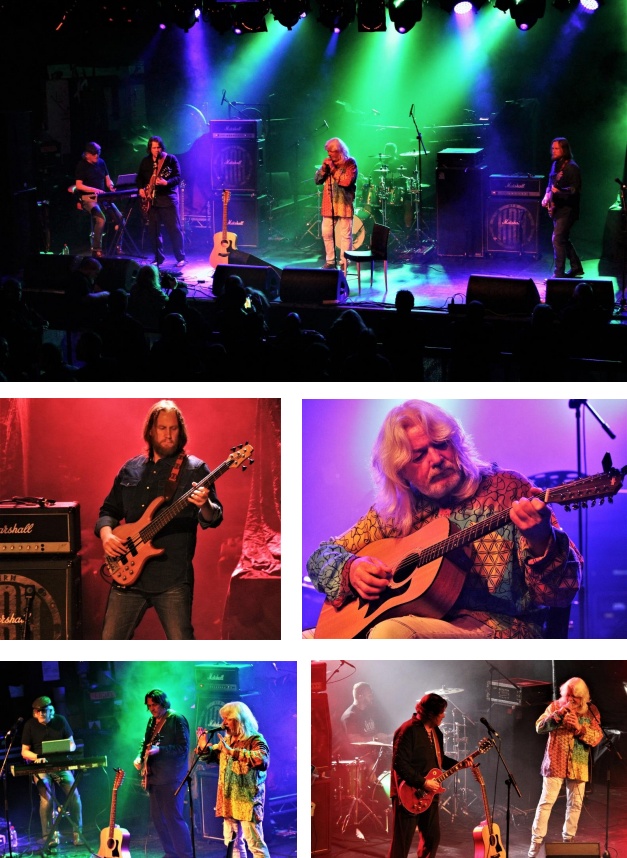 The Spacelords are a trio originating from Germany, and whilst they continued the rather unbalanced ‘space rock/psychedelic rock’ emphasis on the day – they actually spread their wings further with extended instrumental jams mixing rock, blues, krautrock and stoner influences amongst the psychedelia. Akee Kazmaier on bass and Marcus Schnitzier on drums produced a lovely hypnotic groove that sucked you in, over which Hazi Wettstein played some excellent guitar lines. Starting with Synapse, Spaceship Breakdown and then onto Plasma Thruster and Endorphine, their musical interplay was clear to see. A strong Nag Kanya ended a well-received set. 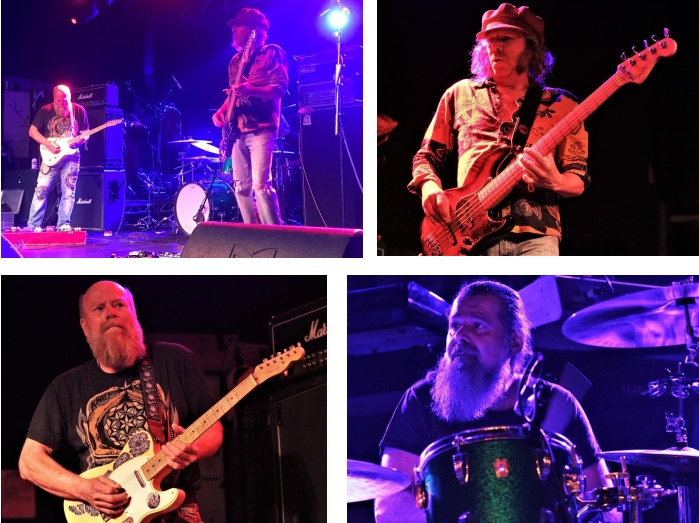 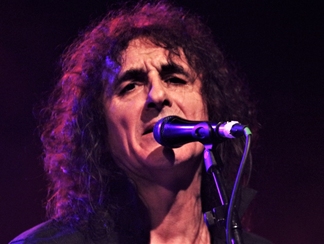 The Hawklords brought Robert Calvert-inspired Hawkwind sounds to the festival in the evening, with their space rock dominated by driving bass and cosmic synthesiser effects soaring and falling throughout. Starting with Speed of Sound and Devil in Your Head, guitarist and vocalist Jerry Richards gamely led the band through an intriguing selection of psychedelia, but sadly their efforts were undermined by a poor sound balance, which saw Mr Dibs’ bass dominating over Jerry’s vocals and guitar. We Are One and The Joker were highlights, as was the spoken poem Obscura, and there was a good version of Master of the Universe somewhere in the sound mix. Hopefully they have a better sound set-up on their current tour to match their enthusiasm and freshness. 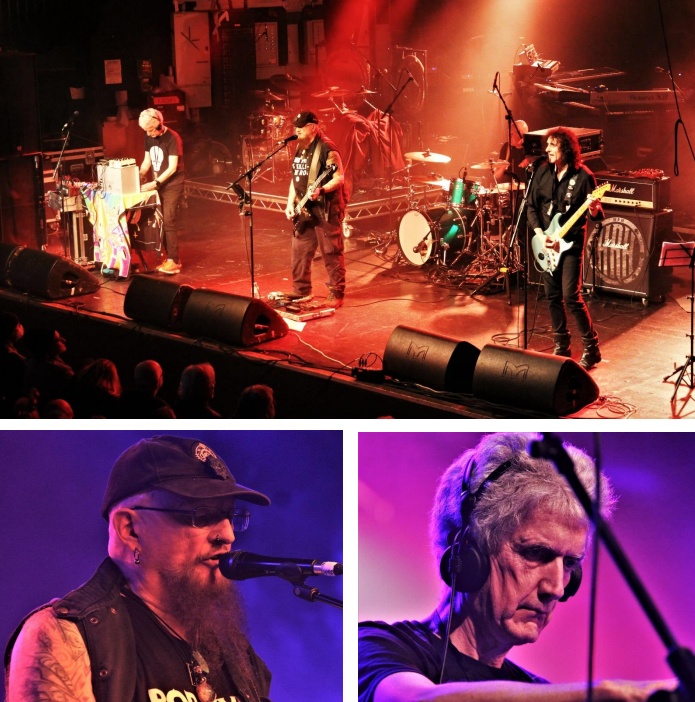 Classic prog returned in the evening, with Carl Palmer’s ELP Legacy bringing a fresh edge to many timeless ELP tracks. With Carl’s huge drum kit dominating the stage, the band launched into Karn Evil 9: 1st Impression, Part 2 and then Toccata and Fugue in D Minor. Carl’s enthusiasm was clear, as he introduced Knife Edge and Hoedown, and his youthful band of Paul Bielatowicz on guitar and vocals and Simon Fitzgerald on Chapman Stick and bass supported him seamlessly, replicating the spirit of Keith Emerson’s keyboards and Greg Lake’s bass and guitar surprisingly well.

Benny the Bouncer was, to be honest, a bit of throwaway fun, but the version of Lucky Man (dedicated to Greg) was moving. However, Tarkus was the undoubted highlight, with great interplay between the trio across all the sections. Fanfare for the Common Man was well-received, as was Carl’s impressive drum solo – at odds with his 72 years. Just time for a quick, crowd-pleasing encore of Nutrocker and HRH Prog was back on track. 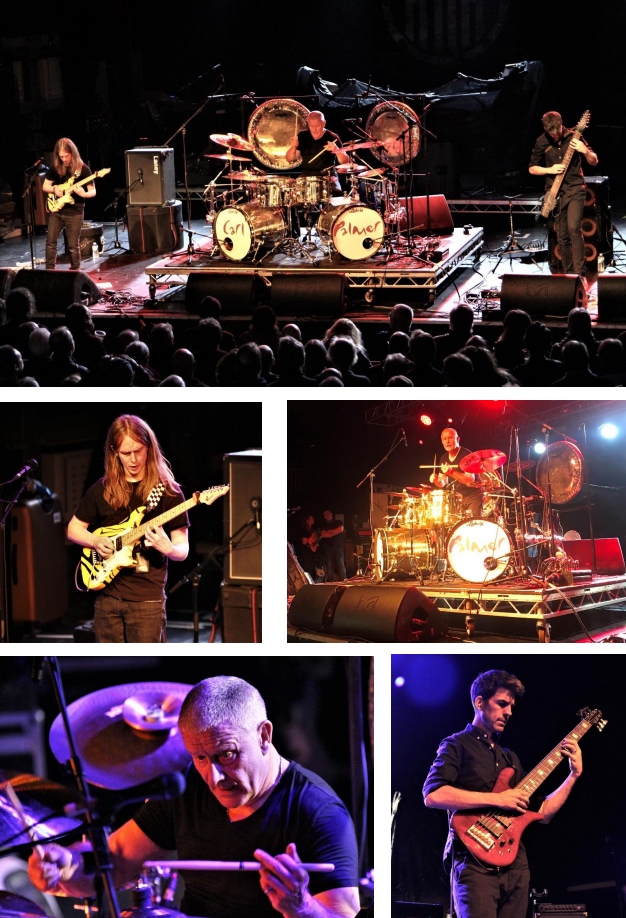 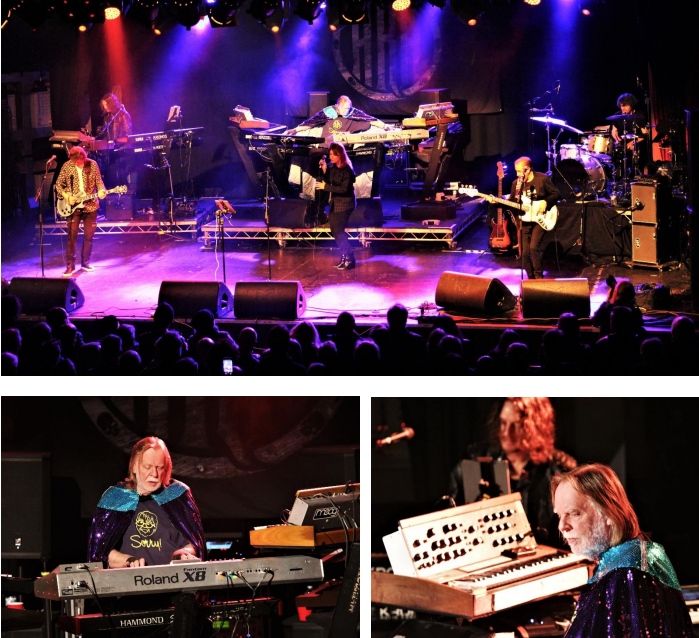 After the departure of one prog icon, it was time for another to close the first day of HRH Prog XI. Rick Wakeman and his revamped English Rock Ensemble produced a strong performance at odds with the age of many of the compositions – and Rick himself. Dressed in his cape and a ‘Sorry’ T-shirt (“Language, Timothy!”), the spritely 72 year old performed energised extended excerpts from Journey to the Centre of the Earth and later on The Myths and Legends of King Arthur….

Hayley Sanderson excelled on vocals and Adam Wakeman supplied sterling support for his old man. The ever-wonderful Lee Pomeroy showed why he is the ‘go-to’ bassist for many bands, while on guitar Dave Colquhoun and new boy Adam Falkner on drums contributed fully. Julia and Robot Man from 1984 sounded better than the originals, and Catherine Parr was surprisingly fresh. However, the biggest surprise of the set was a dynamic version of the old Yes stalwart Starship Trooper, full of verve and improvisation, which had the festival on its feet at the end. Clearly still life in the old dog yet! 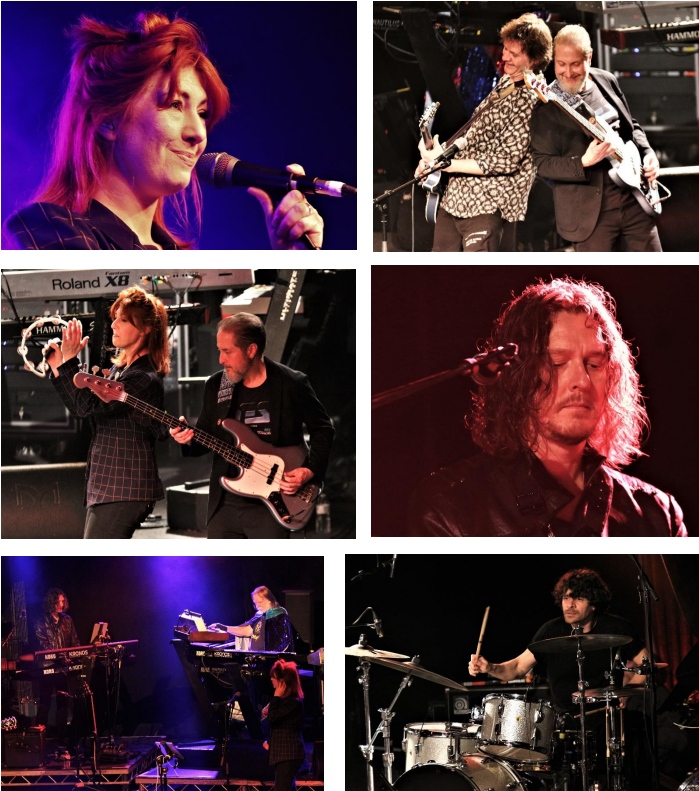