After two years of waiting, as well as venue and line-up changes, HRH Prog XI finally took place over the weekend of April 2nd and 3rd at the O2 Academy, Sheffield. It was a memorable, well-attended festival with many highlights. Here, collected together, are my live updates of the event, including some wonderful photography by Stan Siarkiewicz of ProgPics.

Unfortunately, KARNATAKA had to pull out at short notice, due to one of the band members contracting COVID-19. However, that still left 7 fine progressive rock bands to enjoy on the Sunday. 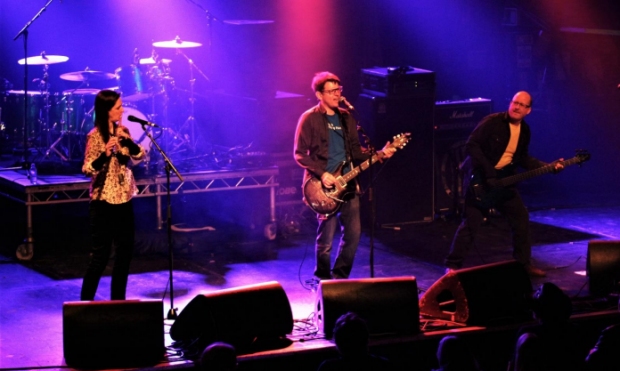 Hat’s Off Gentlemen It’s Adequate (HOGIA) entertained the early festival crowd with an assured and dynamic set of their eclectic blend of prog, rock and alt-rock, amongst other elements. Malcolm Galloway on guitar and vocals and Mark Gatland on bass were this time joined by Kathryn Thomas on flute to make a trio. They started powerfully with a defiant Silence is A Statement, from the forthcoming The Confidence Trick album, followed by Century Rain. Lidice, a song about a Nazi atrocity in a Czechoslovakian village, was moving and sadly all too relevant currently. Playing with confidence and vibrancy, with Kathryn’s flute providing a lovely counterpoint to Malcolm and Mark’s dynamism, they played three more new songs: Back Where I Started, The Confidence Trick and a solo rendition of Cygnus, focusing on the shortcomings of the protective equipment for NHS staff at the start of the pandemic, before a funky Nostalgia for Infinity. Ending with Stand Up, both the band and audience seemed to have thoroughly enjoyed this opening performance of the day. 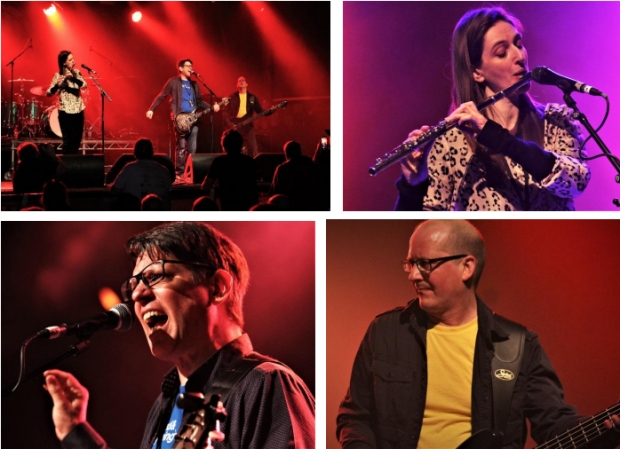 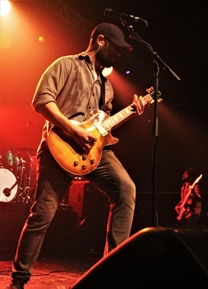 Apparently playing their first live gig, The Bloody Mallard put in an energetic performance in the early afternoon. The London trio, consisting of Tom Walding on guitar, Raihan Ruben on bass, with Jake Bradford-Sharp on drums, ran through an intriguing set of instrumental post-rock, with elements of heavy prog, alt-rock and psychedelia. Starting with Haemoglobin, they featured a selection from their debut release Realm with Subject to Entropy, Noble Riot and both parts of Ceremonious Synapsis included.

They continually swapped styles between powerful riffing and periods of atmospheric delicacy, with echoes of Mogwai and Tool at times. I even heard a touch of early Rush in there too. The guitar and bass interplay was interesting and Jake’s lively drumming impressed. If they can find a way to smooth the transitions between their various styles, they might have something rather interesting in the future. 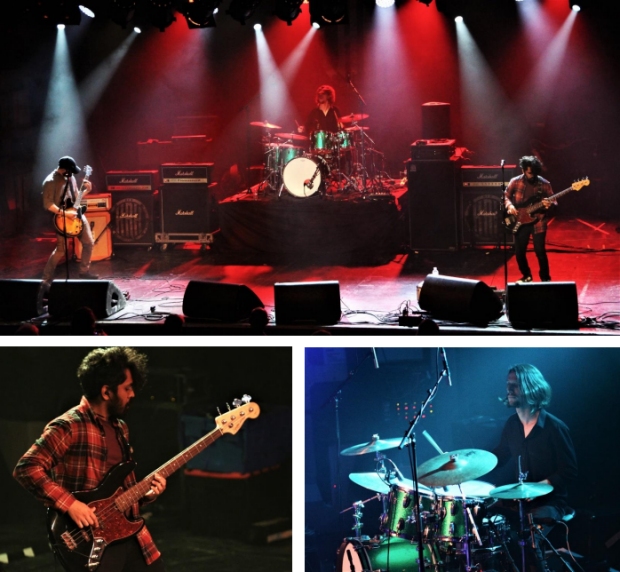 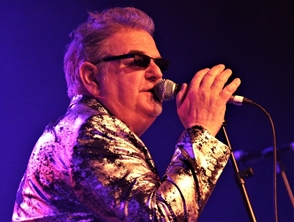 The Room brought their accessible brand of melodic classic rock with prog flourishes to the festival in the mid-afternoon slot. Starting with The Golden Ones and Run from their last release Caught by the Machine, and then Full Circle, the band played a tight, professional set full of emotion and melody. Expressive vocals from Martin Wilson, backed up by the bass of Andy Rowe and the twin guitars of Steve Anderson and Alistair Bell (doing a fine job on his debut appearance) gave songs like Screaming Through the Noise and Vanished a richness and depth. Chris York kept a solid beat going on drums and Chris Teeder added the proggy sheen on keyboards, where necessary.

Broken and Bodies on the Road had great poignancy, and after a toe-tapping The Hunter, the band finished with the emotive It’s Not My Home with its contemporary and defiant message about refugees. The ovation for the missing Eric Bouillette, currently battling ill-health, was lovely to see. All at HRH Prog and TPA wish him a speedy and full recovery. 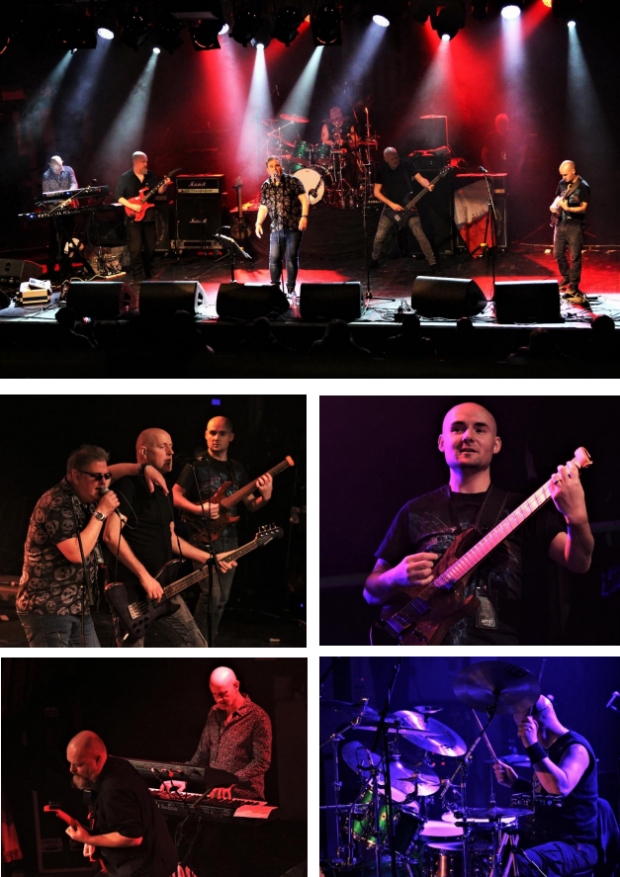 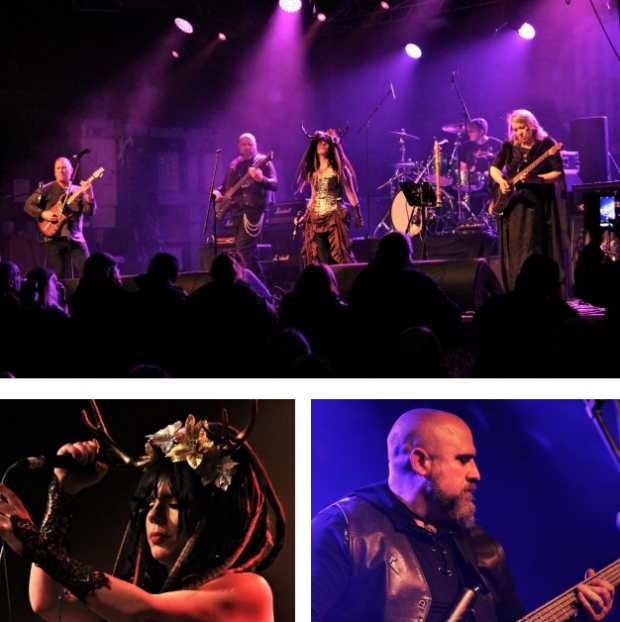 Spriggan Mist were the surprise package of weekend for many – and a very welcome one too. Billed as a pagan folk rock band, they are definitely dynamic, progressive folk rock with light and shade throughout. The five-piece band from Royal Berkshire exuded freshness in their instrumentation, with some fine guitar work from Neil Wighton and Maxine Cilia, along with a driving bass from Baz Cilia. Praise for Aaron Cilia filling in on drums too. However, it was vocalist Fay Brotherhood who was the focus on stage. Dressed resplendently as a pagan queen of the woods, in antlers, her lovely voice and theatrics enhanced the music’s impact (with a touch of Kate Bush, Tori Amos and even Hazel O’Connor at times).

Starting with a new track, The Lair of Isambard, followed by The Portal, Spellmaker and Remember the Day – the music flowed easily, and the audience was treated to some sabre dancing as well. Maxine’s whistles, recorders and saxophone provided a refreshing contrast to the compositions. Ancestors went down well, but the highlight for me was the steampunk feel of the title track from the forthcoming Isambard the Mechanical Dragon album. Ending with a powerful Zombie Nation, the band received a warm ovation from most prog fans, who were well and truly ‘sprigganised’ by this amiable collective. Definitely a band to keep an eye on in the near future, if you like a bit of folklore mixed in with your prog rock! 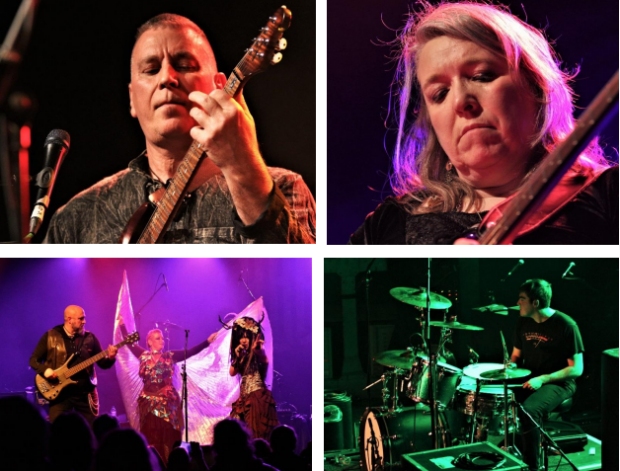 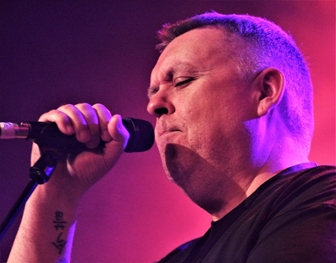 Yorkshire’s This Winter Machine coped admirably with a technical hitch at the start and delivered a very good set of melodic progressive rock, largely taken from their latest album Kites. After the introductory Le Jour D’avant, the band dived into both parts of The Storm. Warming up as the set progressed, Pleasure and Purpose raised things another notch, with singer Al Winter in fine voice during the light and shade of the song. Bassist Dave Close was a dominant figure roaming the stage and Alan Wilson on drums kept everything tight. The double guitar sound of Simon d’Vali and Dom Bennison is now at the heart of the new band line-up, and both had their moments in the sun, with an anthemic This Heart’s Alive and the energetic instrumental, Whirlpool.

It was nice to hear both parts of The River from the forthcoming album The Clockwork Man. The performance ended strongly with a turbo-charged version of Broken, before an exuberant Kites to close. The whole band seemed to ‘come of age’ with this performance, but special praise is needed for Dom, who was on fire throughout. 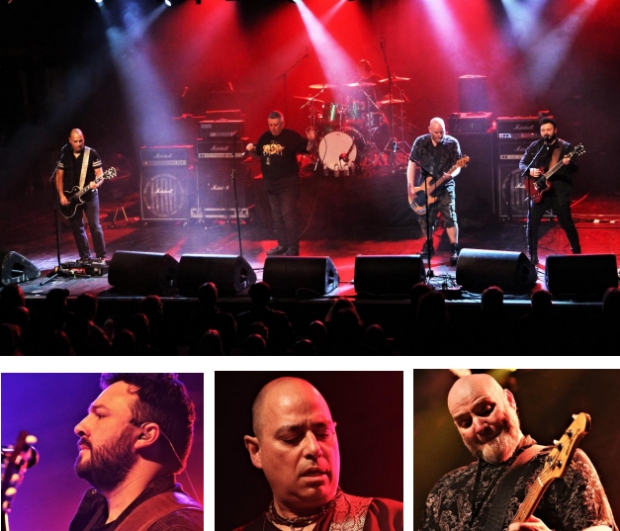 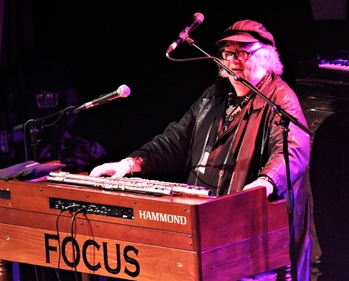 Led by the third true prog icon of the festival, the 74-year-old Thijs van Leer, Focus delivered a warmly nostalgic trip back to the early ’70s with the band’s incomparable mix of old school prog rock with jazz, classical and even blues influences. Whether seated at his vintage Hammond organ, displaying his flute-playing skills centre stage, or delivering some scat jazz vocals, Thijs was a dominating presence throughout, supported by his talented band of Menno Gootjes on guitar, Udo Pannekeet on bass and the wonderful Pierre van der Linden on drums – who produced a vibrant drum solo towards the end.

Beginning with Focus I and Anonymus from the very first album, an expressive House of the King followed and was given a rousing ovation, along with the multi-part Eruption, which provided a showcase for all the musicians. Sylvia and Moving Waves were very well received, as well as the newer, frantic, All Hens on Deck. The biggest cheer, however, was reserved for Hocus Pocus, played at breakneck speed, with the audience helping Thijs with those higher notes. A quick encore of Focus III ended the set and the whole performance emphasised that Focus is undoubtedly a classic prog band to still enjoy after all these years. 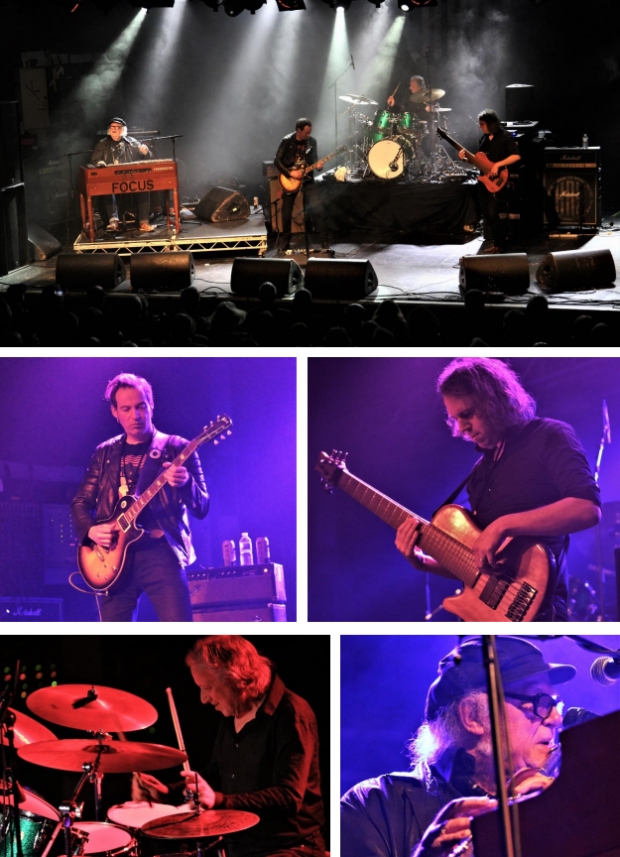 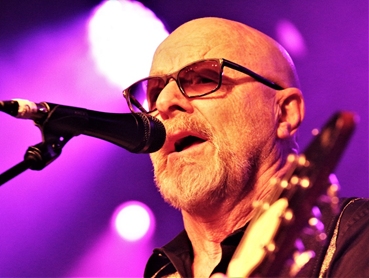 Wishbone Ash finished off the festival in fine form and sent the festival goers home happy with a mixture of new and old melodic classic rock. Mark Abrahams provided some excellent twin-guitar support for Andy Powell and along with the ever reliable and smiling Bob Skeat on bass and a strong beat maintained throughout by new drummer Mike Truscott, the band were as tight as ever.

Starting with a nice trio of comparatively newer songs, Bona Fide, Enigma and Eyes Wide Open, both band and audience were nicely warmed up by the time the opening drums of The King Will Come started up. Excellent versions of Warrior and Throw Down the Sword – also from the classic Argus album – followed to rousing cheers. 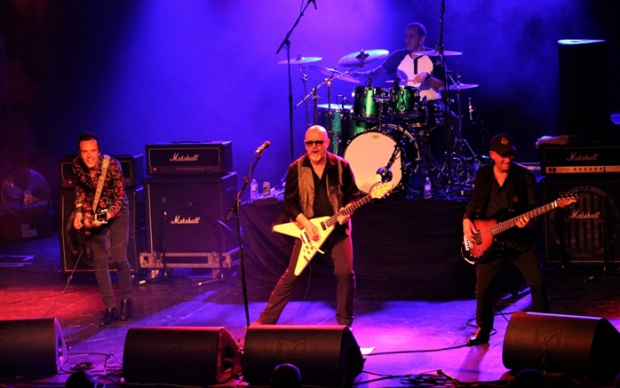 Andy’s vocals were stronger than when I saw him on the last UK tour, and there was a confident and relaxed feel to the whole performance. After a defiant We Stand as One from the latest Coat of Arms album and then a melodic Standing in the Rain, it was left on the classic epic Phoenix to complete the main set, with Andy and Mark almost telepathic in the way they weaved through their guitar lines – both together and separately. No Wishbone Ash concert would be complete without Blowing Free as an encore, and everyone shouting ‘1, 2, 3, 4’ before the reprise. Just time for a powerful version of Jailbait and a standing ovation to complete a great performance.

Okay, not necessarily prog as such (although Phoenix has its moments), but a reminder of the time when record shelves back in 1972 housed Argus next to Close to the Edge, Foxtrot and Made in Japan, without any worry about genres! 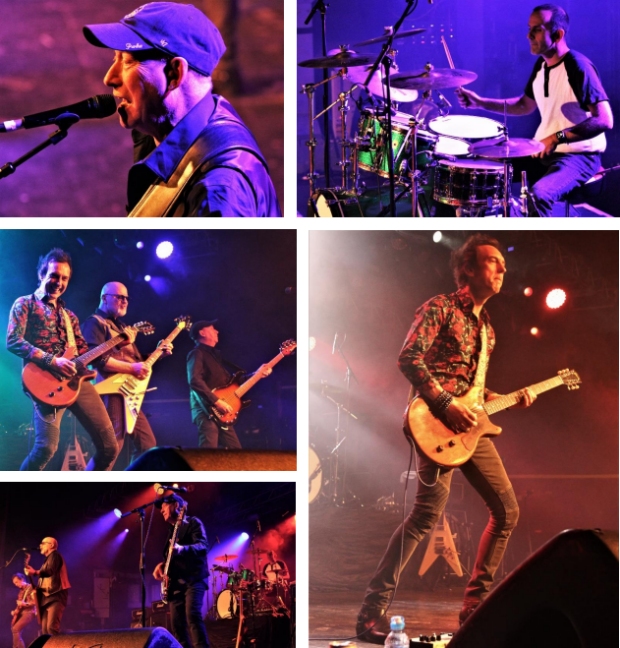 … and suddenly it was over. 16 great bands over two days – praise to them all! Old favourites and some new discoveries. Lots of highlights and great seeing a strong turnout of wonderful prog fans enjoying live music again. Well done to the HRH Prog team and the Sheffield O2 Academy staff, front and back of stage. Great stage management getting the changeovers done so quickly as well. Maybe the occasional sound balance issue – ease off on that bass slightly at times – this is HRH Prog, not HRH Hard Rock Hell! Remember to bring back Viking Ale too!

Finally, if you liked the photographs of Stan Siarkiewicz of ProgPics and would like any of the photographs at full resolution (and lots more not used) – find him on Facebook.