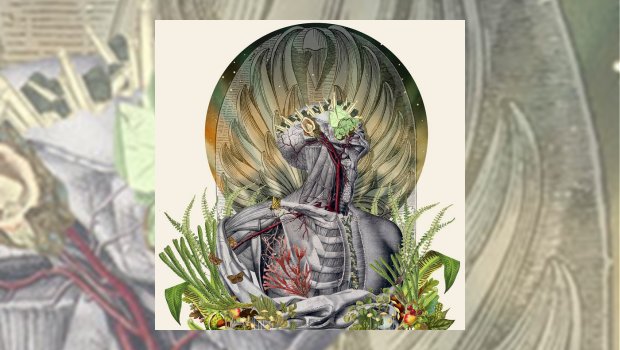 The Bloody Mallard are a new band for me. The tags on their Bandcamp page indicate, in various permutations, that the music will be heavy, psychedelic and progressive. The band’s website states that “musical influences can be heard from bands King Crimson, Pink Floyd, Baroness, Yob and Elder though they stem a lot further…” And while that might give you some idea of what the band sound like, be prepared for the edges of that idea to be stretched somewhat. The Bloody Mallard are all over the place, in terms of style and sound. So what does debut album Realm sound like?

The opening number of the album, Haemoglobin, begins with a delicate acoustic instrumental introduction that reminds me, of all things, of early Queen. That’s not a bad thing because I love early Queen, but I am reminded of Brian May’s dulcet tones for the first minute or so, before the piece turns into a strange hybrid reminiscent of early King Crimson and later Tool, through a filter of doom. Then some really nifty bass, after which we can introduce some classic stoner, a la Kyuss, yet remaining Crimsonesque all the while. Confused, yet? Well just wait a little, because the band are about to throw some post-rock in the mix too. This is a glorious combobulation – and I don’t know that there is such a word, but there should be, and The Bloody Mallard should be the definition as they manage to bring together something cohesive out of what appears to be a state of confusion and disarray. The track appears to come to an end after around seven minutes, but there are still another three or four to go. I absolutely love the almost heartbeat-like gentle rhythm (appropriate enough, given the track’s title) that brings to life the extended coda to Haemoglobin, before it explodes once more, with final notes reminding me a little of Rush (just to add another name to the mix).

The next track, Subject to Entropy, is one of the few singles that have been released prior to the album, juxtaposing giant slabs of heaviness with more quiet passages that still simmer with menace. If the first track showed combobulation, then I guess this track should show discombobulation. But if this is entropy, it’s hardly a deterioration into decay and disarray. In fact, the final 40-seconds or so, with their clean acoustic sound, are even more beautiful for the contrast with the fuzzy walls of distortion that preceded them. It’s no wonder the band picked this as a single to promote the album, as it’s a real gem!

Sandwiched between Subject to Entropy and another single, Noble Rot, is a very pretty piece called Reversion. It’s short and sweet, but while it’s not too sweet, I do find it far too short. I’d really have liked for this to develop a little more. It ends, if not abruptly, as if it were about to go somewhere, but then just trails off. Still, Noble Rot makes up for any disappointment fairly swiftly. It makes for a very solid centrepiece, and I love the Floydian middle section – easily one of my most favourite moments within the album. Of course, it doesn’t last too long, before being pummelled away. Despite being in the middle of the album, Noble Rot acts somewhat like an overture. I guess maybe the overture was subject to entropy, too, and in the chaos, it fell here, rather than the beginning. It works incredibly well, though, recalling what has come, and foreshadowing what is to come.

And boy, what is to come is pretty darn good. I love the two parts of Ceremonious Synapses, which appropriately enough fire off in every direction. The Bloody Mallard don’t state Tool as one of their influences on their website, but I’d be surprised if they aren’t one. I hear Tool throughout the album, in some places more than others. Ceremonious Synapses (i) and (ii) definitely have such places. The second part, particularly, has a very nice Tool vibe in its introduction. And I have to say that Ceremonious Synapses (ii) is probably my favourite track on the album. It is described by the band as being the most climactic moment, and I can’t argue with that.

Despite The Bloody Mallard being a group formed by guitarist Tom Walding, and the walls of sound and delicate textures he creates being an integral part of the band, throughout the album I am drawn time and time again to the rhythm section of Raihan Ruben (bass) and Jake Bradford-Sharp – particularly the drums of the latter. There are so many moments where much of the atmosphere is provided by the drums, and the rolling drums in the final couple of minutes of Ceremonius Synapses (ii) are just one example. They end the track with real style. But there is no getting around the fact that this is one hell of a power trio, who are all in each other’s pockets. There’s no other explanation for how well they stitch together the various sounds and styles that make up this album.

We’re left with the attractive and reflective Dawn to close out the album. Like Reversion, this is a fairly short number, but here the length seems perfect. After Ceremonious Synapses (ii) anything longer would have felt superfluous. In structure, if not sound, this track also reminds me of Brian May and early Queen, as it almost replicates the feel of his “never-ending staircase” that bookended the A Day At The Races album. It definitely provides a perfect closure to an album full of surprises and enjoyment. This is an incredibly impressive debut, and it will be very interesting to see where the band goes from here. If live performances ever exist again beyond the online watch parties that are the new norm, then I will definitely try and attend a The Bloody Mallard gig. Their sound is contained and somewhat restrained by recording in the studio. I would love to be subject to the entropy of a live performance!