For two or three hours let’s pretend all that shit going on out there in an increasingly dysfunctional and dangerous world is not happening, and immerse ourselves in the disorienting psychedelia offered up by the two highly contrasting acts presented for our entertainment at this charmingly idiosyncratic venue half a mile uphill from Kings Cross Station.

Chlöe Herington is known to me chiefly as woodwind player de jour for the loosely knit London Cardiacs’ family tree, and especially for her role in Knifeworld, a band that seem to be currently on hiatus. For at least nine years she has been a part of a female trio going by the name V Ä L V Ē, a rarefied musical concoction of manipulated found sounds, woodwind (of course!), and tonight a melodica too, driven by sequencer rhythms, synth pulses, and Emma Sullivan’s occasional guiding bass. Third member Elen Evans was absent, and her harp parts were replicated via the labyrinthine electronica laid out on a table in front of Chlöe, who described the music of V Ä L V Ē in a lockdown interview as “Intimate, spatial, and a bit glimmery”, and it certainly is, with maybe a bit of muscle here and there, too! See that interview, followed by a filmed set HERE (from 44:45). 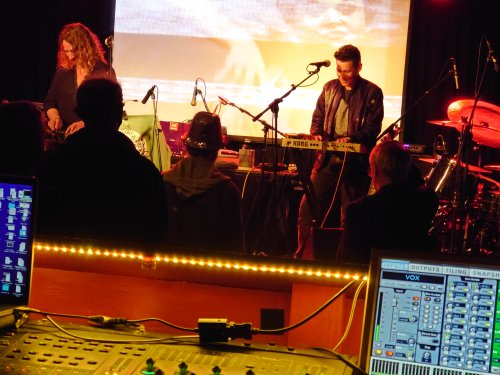 In their spot as tonight’s support act, V Ä L V Ē give us all the above, and the delicate nature of the sounds therein would prove to be in direct contrast to the headline act’s more physical approach. In actualité, both were cerebral in their own way, as well as being rhythmically engaging, and V Ä L V Ē even had me shuffling about minimalistically in an approximation of “dancing” at one point. 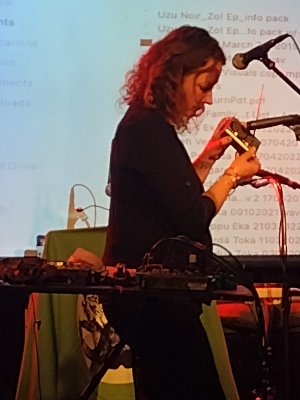 Definitely the best moments were the highly evocative lyrics, which were engaging as well as being slightly uncomfortable for us participants in the modern social system, here at the end of the capitalist cycle. The Seeds That the Wind May Bring particularly stood out in this respect. Maybe my analysis is skewed, but like all good lyrics, I guess it’s left open to interpretation. There was a strange magick at work, that much I know.

Chlöe tells me that there’s a new album out at the end of May, which will definitely be worth investigating, and I suspect I may be putting virtual pen to paper on these very pages! 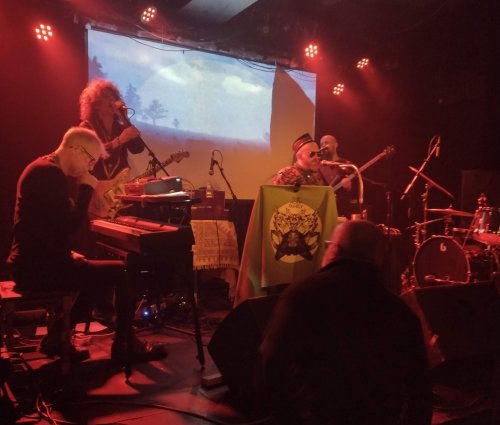 Y’all know how mesmerizingly groovy The Holy Family’s eponymous album from last year is, I trust? If not, you must investigate that Bandcamp link at the end of this wordwang right now. Oh, and pray indulge me wittering on in a drooling fashion about it, HERE.

Everyone up to speed now? Well, it really doesn’t matter how loud you play it on yer steam-powered stereophonic hi-fidelity system, it won’t get close to the primal excitement generated by this psychotropic conglomerate up close and personal. They all up the ante to the nth degree, but the star of the show for me was the sheer pounding insistence of Sam Warren’s bass figures. When he, drummer Joe Lazarus, and David J. Smith locked into the groove on set closer Chasm for a good five minutes, it was a sight and a sound (that’s “a sight and a SOUND!!!!!!!”) to behold. Internal organs were rearranged and rendered unto jelly. Small planets collided, gestated, and gave birth to a maelstrom of Kosmische wonderment right before our mashed senses. 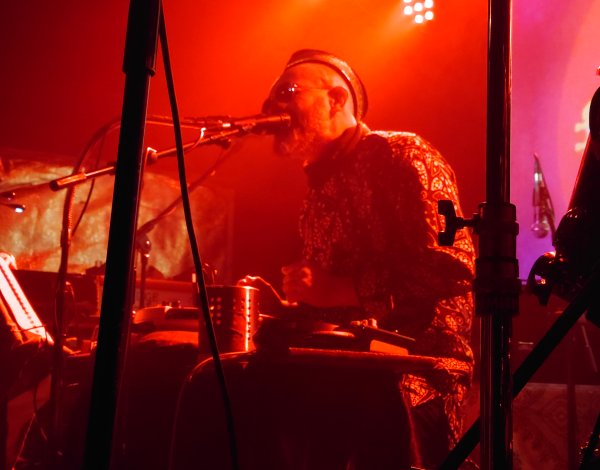 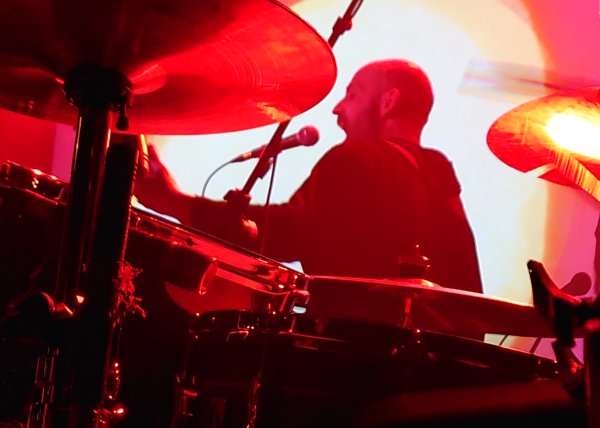 The whole group often morphed into a single amorphous being, nowhere more so than on the soaring and inspirational Inner Edge of Outer Mind, a thrill trip through to the other side of a black mirror, David’s summoning of dark spirits lifting us stunned onlookers to new heights above and beyond the tumultuous clouds. You might guess, I’m sold! 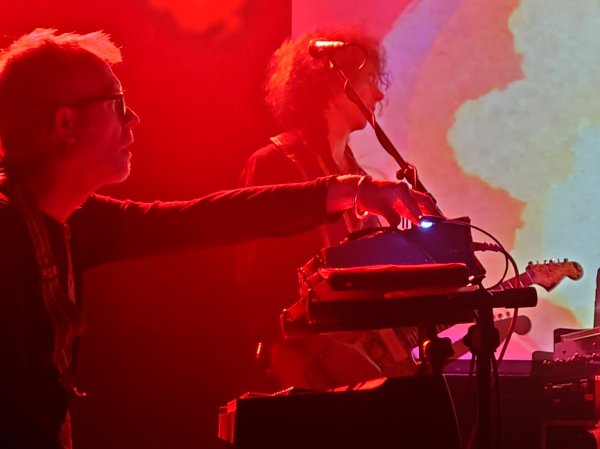 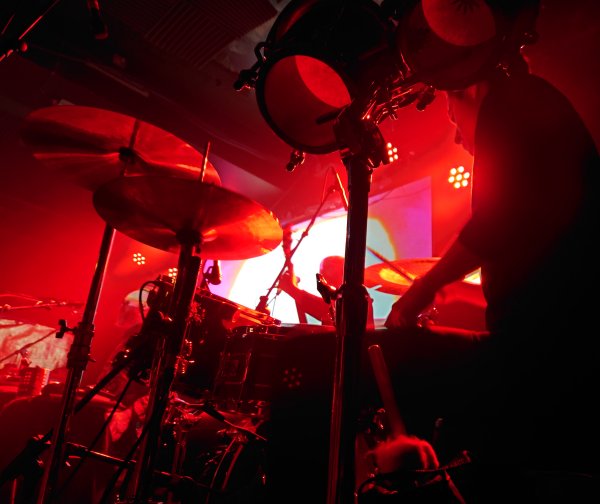 Hyperbole aside (who, moi?), it was rather good, aye. That last sentence was for those of you out there who think reviews of gigs are a waste of time… but you won’t be reading this, so this sentence is pointless.

Replacing Emmett Elvin tonight was the wholly willing and rather fabulous, if somewhat unlikely figure of Craig Fortnam, revealing a hitherto unsuspected lysergic streak on the electric Joanna, riffing away like a good ‘un! Finally, a mention for Kavus Torabi, furiously spraying shreds of light, utterly lost in the moment. Bloody marvellous! 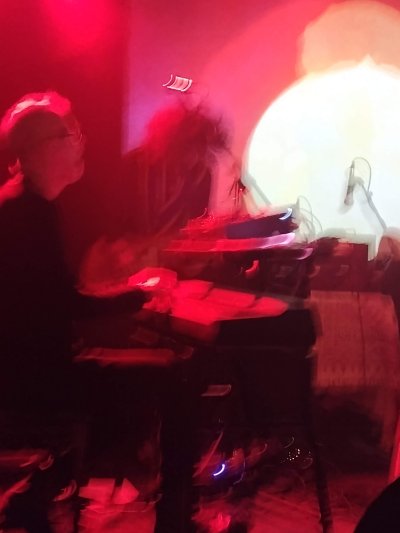 SETLIST
[Basically, the same as the album, and in the same order, so…]
I Have Seen the Lion Walking
Skulls The ….
Inward Turning Suns
Stones to Water
Desert Night
Wrapped in Dust
World You Are Coming To
Inner Edge of Outer Mind
A New Euphoria
See, Hear, Smell, Taste
St. Anthony’s Fire
Chasm First Part
Chasm Second Part