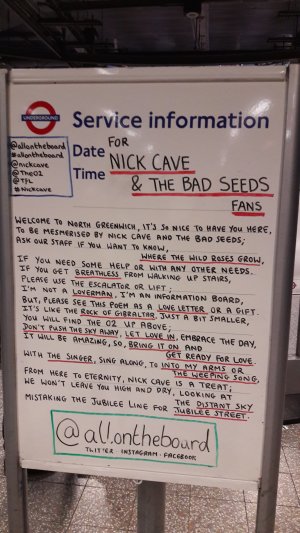 A rather spiffing day out in the capital was kicked off with a trip to the V&A for the Pink Floyd Exhibition, and a highly entertaining and informative diversion it was too.

After a day of rather fine early Autumn weather we arrive out east just as it is starting to rain. Safely ensconced inside the world’s most permanent impermanent structure, and after a short delay due to understandable heightened security procedures, we made our way up… and up, then up some more into the gods of this vast tent and settled down to wait for the show to begin. I was a tad worried about the drawbacks of being so far up, sound-wise, especially so given some griping coming from further north in the town the previous night, and from a far smaller venue too. I need not have worried for the sound was spot on.

The last enormodrome gig I went to that was dedicated to one band, rather than a one day festival (Free Nelson Mandela concert, etc.), or a one-dayer with a huge headliner (REM, Led Zep), and unlike those examples also indoors, was a distinctly underwhelming Pearl Jam “show” – I use the word advisedly – at Wembley Arena back in 1996, and even that barn’s capacity is only just over half that of the gigantic space offered by Tony Blair’s Folly, aka the O2 Arena. 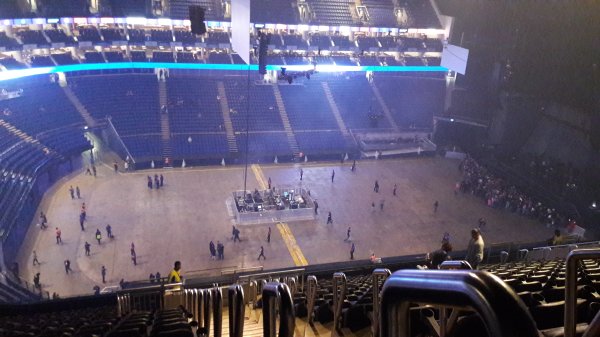 You see, my bag is odd music that hardly anyone cares about and therefore the gigs are played in intimate venues, sadly occasionally to the extent of the band outnumbering the audience, so adjusting to the politics of gig attending as part of the population of a temporary small town took some getting used to. Constantly having to get up for a steady stream of stragglers that made its befuddled way up into the gods where we were sat, carrying on all the way into the third song, balancing their trays of taste-free awful lager was probably the most annoying feature. The fetching and carrying of overpriced pop continued intermittently throughout the show, that and the need to then process it out the other end, and I had to laugh as during the song Magneto a small group of confused punters stood in the gangway staring at their tickets, and the aisle numbers painted on the floor for what seemed like an age, completely obscuring our view of the stage in the process, just as our host emoted the line “Oh, the urge to kill somebody was basically overwhelming”.

Still, minor gripes aside, Cave shows he can win over this huge space, the biggest U.K. gig of his band’s career thus far by sheer force of character alone, particularly during the painfully real songs from Skeleton Tree that prove a melodic definition of catharsis. A soul-searching highlight comes during Distant Sky, where the absent Else Torp was replaced by her huge image on a big screen at the back of the stage, her words underlining the non-believers’ elegiac farewell that this simple but so effective song becomes in her hands.

Nick Cave has always returned to one of his pet themes throughout his career, that of singing about death and reckoning, but suddenly with the tragic events that begat Skeleton Tree, it all got horribly real. He’s handled it in the only way you somehow knew he would, by wearing it on his sleeve. Played out before us as part of the grand entertainment, the pertinent songs from that cathartic album are in danger of being lost in the general brouhaha. It is difficult to know what percentage of tonight’s audience are aware of the provenance of a song like Jesus Alone, or the aforementioned Distant Sky, indeed a couple of young women in front of us spent the vast majority of the concert conversing on social meeja, or taking pictures, and very little attention appeared to be being paid to the actual songs. Ah well, I don’t suppose it matters, it’s just another unfathomable aspect of mass entertainment to me.

Indeed it seems slightly odd that a man who has always had very dark subject matter never far from the core of his work is now the object of the adoration of thousands. Similar to the Jim Morrison effect really, but with less obvious posing. After all, this is entertainment when it comes down to it, and with the minimum of fuss and flash effects Nick Cave, Warren Ellis et al delivered well over two hours of tumultuous heart rending modern blues. Warren Ellis, as ever the faithful sideman and now looking more wizened by the day, chanelled the always present inner demons stalking the stage into feedback-howling violin solos of the most unconventional and feral kind. 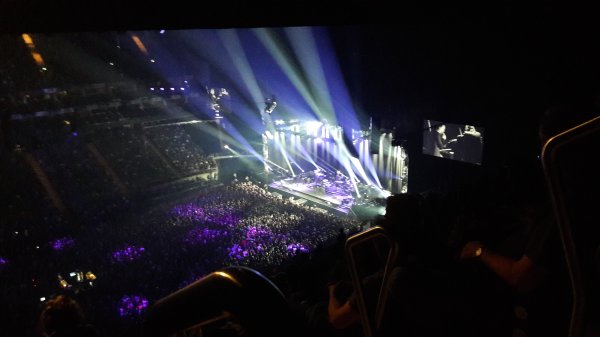 As well as the sizeable chunk of Skeleton Tree, all the hits were here tonight, spanning the decades. A broiling and ancient Tupelo standing seamlessly next to a scathing Jubilee Street, dedicated to Cave’s wife, “the fox”, a cacophonous From Her To Eternity following the elemental Higgs Boson Blues, a tune that sounds like it’s always been here. Into My Arms became a mass singalong, and the encore saw Cave encouraging a stage invasion and duetting with Bobby Gillespie. A friend of mine reckons all Nick Cave songs sound the same, and maybe that’s the point, because the tunes backing Cave’s poetry are timeless pieces of deceptively simple music that seem to come from everywhere at once, grabbed from the ether by the band as Cave emotes in his fulsome baritone.

Belying his 60 years – a bit more than 21,900 days now, time waits for no man – Cave leaps back and forth onto plinths set in front of the audience, positioned away from the stage by a metre or so, with the athleticism of a man half his age, as he grapples with his adoring hordes way down there in the mosh pit. Observing those platforms beforehand he tells us “This is a fucking disaster waiting to happen”, of course it didn’t, this is arena rock baby, and Cave has always been at home here, it just took a few decades for this massive audience to find him.