While briefly communicating with the Earthlings present at the Magma Café OTO gig in London last year, Stella Vander informed us supplicants of a gathering of the tribes to be held at the genuinely iconic Paris L’Olympia the following February, the cherry on the cake being the presence of the Metalïk Orkestraah. My trusty gig going companion and I decided there and then that we would acquire tickets to this prestigious event. Later, further thought was given and we decided to turn the whole shebang into a few days in the French capital with our more presentable halves. 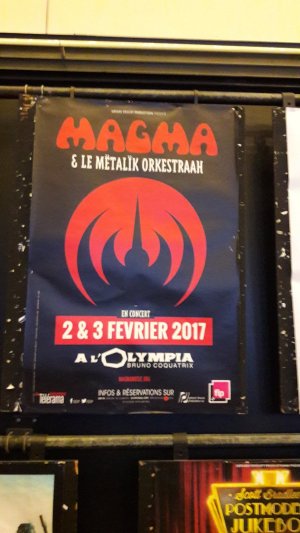 After a leisurely day exploring the Grandes Serres du Jardin des Plantes, and a stroll back to the hotel locality along the Canal Saint Martin, and a rather fine slap up meal, we returned to our digs, showered and made our way to L’Olympia Bruno Coquatrix, or just L’Olympia as it has been known over the years. One of, if not the most iconic of French concert venues, this place has seen them all over the years, from Edif Piaf to famously hosting the final night of a four date pre-fame warm up tour for The Jimi Hendrix Experience in October 1966, and all kinds of acts at points in between and beyond, right up to the present day.

L’Olympia is a large theatre with a capacity of just under 2,000, the place was rammed with an enthusiastic hometown crowd giving a rapturous response as the five band members and three vocalists took up their positions to the intro tape, eventually morphing the sound into the looming Gothic portent of the first part of Köhntarkösz.

Next up was a jazz groovin’ Kobaïa, from the band’s debut album, released waaay back in 1970 when they were more inclined to jazz rock, as was the flavour of the day. Also, the song included the only lines sung or spoken in English all night. As such it sounded rather incongruous.

The sound for the “band” section came across as a little uninvolving, even a tad on the low side, but that could have been down to where we were sat, to the right of the stage in the stalls, and well under the balcony canopy. After a rousing Theusz Hamtaahk, the band left the stage and the curtain came down for the interval. I admit now that I only became aware of the individual track titles of this section after the event as the whole set was played as one near-continuous piece of music, with only the real fans around me letting me know where the “gaps” were!

After a quick stretching of the legs during the 15-minute break, including a very brief hello to a Magma obsessed ex-snooker star, the curtains rose to reveal a full orchestra – brass and woodwind to the left as we look, including what was possibly either a bass tuba or a euphonium, and strings to the left. This was, of course, the Metalïk Orkestraah, who were separated by acoustic screens from the band now partly obscured from our view in the stalls as a result. Must have looked fabulous from the balcony, as indeed this snap proves: 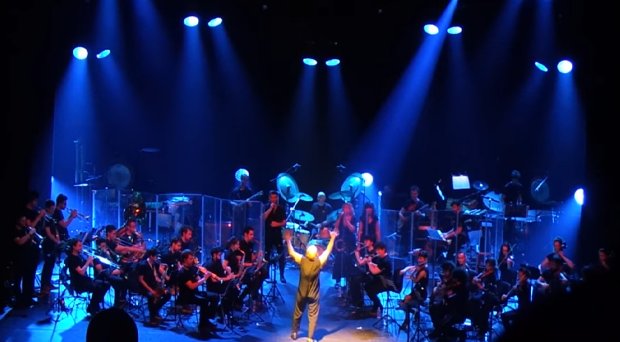 The large ensemble launched into the whole of Ëmëhntëhtt-Ré with gusto and no little panache and subtlety. I recognised this one all right! After some tweaking of the mix, the sound engineers got the balance between Magma, led as ever by the magnificent drumming of the ever-youthful Christian Vander and the bass, currently supplied with grace and power by Philippe Bussonet, and the more delicate timbres of the Orkestraah just right.

Occasionally conducted enthusiastically by vibes player Benoît Alziary, the orchestra, while adding many layers to the sound, made the whole inevitably more subtle and intricate than the last time I witnessed the band in the much more intimate setting of Café OTO. However, this is not at the expense of Magma’s innate force, which came to the fore on the mighty Slag Tanz.

Hhaï sees the guest appearance of an old Magma player, no less than violinist Didier Lockwood who almost set his strings afire with a frenetic solo spot within the tune, making me think of Jerry Goodman at his most incendiary. Stunning stuff!

The music billows along on cosmic waves reaching for the stars at their peaks. When the band and orchestra stormed through Slag Tanz, the roof came away from its moorings, the easier to communicate with Kobaïa. This music is revelatory and utterly spellbinding, making you realise how much of modern prog is really quite mundane. And Stella Vander has a vocal energy and power that puts many a weak-kneed prog vocalist half her age to shame. There’s no posturing or theatrics needed, the power is all there in her voice. Of course, she is more than ably abetted by her two singing cohorts but take nothing away from this true force of nature.

An encore was demanded, and in a neat twist, Christian Vander takes stage front to lead the string section through a calming Ehn Deïss taken from his 1980s solo project The Offering. This was the calm after the storm, the music finding safe harbour at last, and a fine way to end a wonderful evening. Wow!

Having seemingly finished the “Endless Tour”, these two concerts – they were repeating the performance the following night – are followed by a short break, and then Magma go off on their Reset Tour, mostly through France but ending with a one-off date in the USA on August 19th, in Las Vegas of all places.

In the last couple of years I have seen Magma in the rather stately and polite confines of a plush classical music venue, in a trendy and cramped club, and now here in the home of French rock’n’roll, and they work just as well in each of these strikingly different environments. Catch them if you can, you deserve to treat yourself to one of the best live experiences you will witness.