It’s three years since Magma last swooped over la Manche to enthral and delight with their otherworldly sounds, and the faithful are out in force to catch an event that can only become rarer with the passing of time, the ravages of age and the realities of political self-interest no doubt coming into play for touring bands in the future. But they’re here now, and I’m excited.

Now in their fiftieth year, there is no hint of celebration for that momentous milestone, the music remaining timeless and all that really matters. Magma have managed to avoid the ‘heritage act’ trap and remain a vibrant and unique experience, a life-affirming outburst of positivity and evidence that ploughing your own furrow, often in the face of adversity, will always be the most satisfying course. Now in his 70s, Christian Vander’s belief in his vision and life’s work remains undimmed and he approaches every performance with exuberance. It is his duty to keep playing and inspiring with this music, and there will hopefully always be an audience keen to listen. 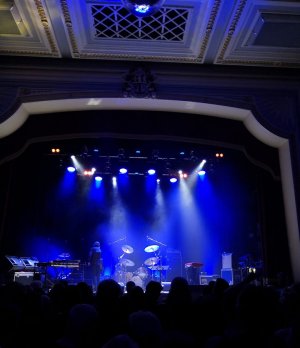 The TPA Massive are out in force to celebrate this noteworthy event, and after a tasty feed and a good natter, we’re at the Assembly Hall in anticipation. I’ve not been to this venue before, but what a lovely place. Once inside it’s obvious that many familiar musicians are in attendance, always a good gauge of quality, from my experience.

The sense of expectation hangs heavy, and as they appear Magma receive a roar of welcome. With the quintet of instrumentalists set out in the familiar horseshoe formation centring around Vander, there’s a riser for the trio of singers behind at stage right and plenty of room for them at the front.

As they begin I find that I don’t need my now de rigueur earplugs, the sound is pitched at a very pleasant volume with clear definition. The bass is a little low in the mix from where I am but I hear later from others that the sound elsewhere in the hall lost the bass, and sometimes the vocals, completely, which is a great shame as these are key components of the Magma experience. Reports from the seats in the balcony suggest that the mix was very good up there, so that was probably the focus, suggesting that the room might be a difficult one to get consistently right.

The bulk of the set is built on the Theusz Hamtaahk trilogy, the three extended pieces blended into a suite of over an hour of astonishing music. It was all written decades ago but it is, as mentioned, simply timeless, the otherworldly nature rendering it impossible to date in terms of earthly styles or norms. The title piece moves into Ẁurdah Ïtah and then the unmistakeable Mëkanïk Dëstruktïẁ Kömmandöh, each movement deviating from expectation in truncated arrangements, the structures used as a starting point for the band to move forward. It’s thrilling stuff, music as it should be, uplifting and absorbing, free of the constraints of expectation. 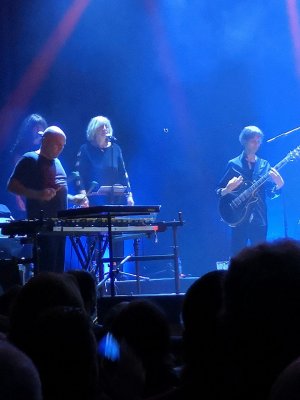 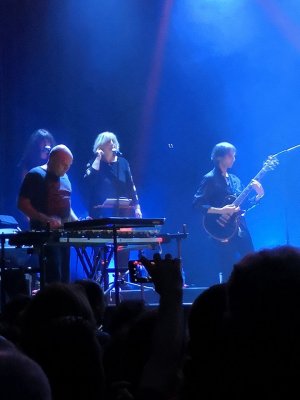 The sublime elegance of the voices of Stella Vander and Isabelle Feuillebois complement the earthier tones of Hervé Aknin, whose voice features most prominently as lead vocalist, but more often they act as a unit, the choral effect elevating the music skywards. Hervé has grown into his role during his decade long tenure and delivers the unwieldy Kobaïan words with a commanding presence. From the building intro, the first moment where Stella’s voice rises to the higher registers above the maelstrom is just breathtaking, and throughout the detail in the delivery of the vocal arrangements is staggering with all three singing solo at various points. These have to be the hardest working vocalists anywhere; it’s not a job for the faint of heart.

Christian Vander remains a force of nature behind the kit and his partnership with wonder-bassist Philippe Bussonnet is powerfully potent. It is a terrible shame that the mix on the night was such that the bass was lost for many as Bussonnet’s phenomenal dexterity is a focal point of much of the Magma sound. When he locks in with the thrusting momentum of Vander it’s like a freight train rolling down a steep gradient – unstoppable.

The sound is rhythmically primal but accented by the ethereal vibraphone of Benoit Alziary, sometimes played with violin bow to add new and unexpected textures. Alziary seems to work in tandem with the keyboards of Jérome Martineau-Ricotti, the minimalist repetition and flourishes from both adding to the momentum and drive. Rudy Blas’ superb guitar complements Bussonnet so well and he clearly enjoys his work, taking some delicious solos and smiling widely throughout. 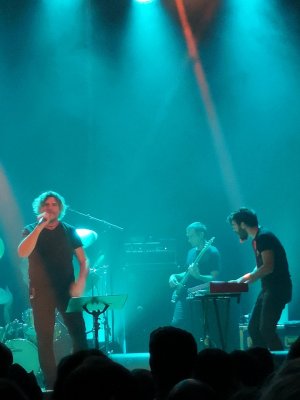 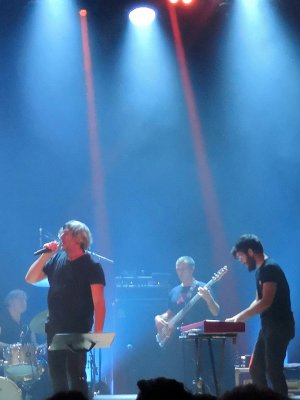 The cheering at the end of Mëkanïk Dëstruktïẁ Kömmandöh nearly brings the roof down and the band are obviously thrilled by the response. Stella addresses the crowd on a couple of occasions during the set, but only briefly; this is all about the music.

Bussonnet comes into his own for the manic and dextrous riffing of Zombies, his pounding waves of sound pushing the piece with a trance-like fervour, likewise the encore De Futura, Jannick Top’s piece from 1976’s Üdü Ẁüdü, which Bussonnet delivers to perfection. Nothing from latest album Zëss, but you won’t find many quibbling about the set list.

Christian Vander is the rock throughout all this, intuitively ‘working’ the music, playing what he feels, improvising around the structure and singing in his inimitable style on several occasions in an engaging performance that displays full well that this music is his life and his muse. He marshals his troops to deliver it with the precision and passion it deserves, and it’s a compelling beast of a set. The music is dynamic and organic, composed but with the appearance of rising out of nothing, a spiritual exaltation, fully in keeping with the ‘celestial’ meaning of the Kobaïan word ‘zeuhl’, which has become synonymous with the band and their acolytes.

This show took me to the ‘other place’ that only a performance of music of this passion and integrity can, which was very much appreciated on the back of what has been a particularly stressful year so far. Legendary does not do Magma justice, an institution of particular charm and wonder, long may they continue to enthral. 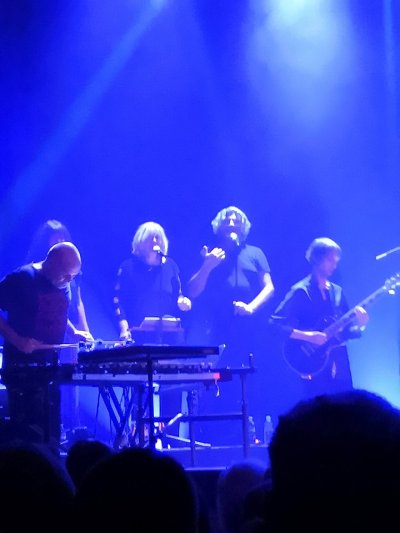 [Photos courtesy of Denis Anderson, used with his kind permission.]