‘Unique’ is a word that is used far too often but for the creative wonders of Christian Vander and Magma it is spot on. This music is unique, and when delivered with the power and passion of tonight’s performance it is the nearest thing to a religious experience I’m ever likely to witness. Music, when allowed free reign, can – and should – do this.

The Cadogan Hall, just off Sloane Square, was an incongruous venue for only Magma’s second (after the previous night in Manchester) show in the U.K. since 2009. Predominantly a classical venue it was the perfect space for this concert and I hope more bands get the opportunity to play there. The 900 very comfortable seats appear to have been sold and with a great view from everywhere in the hall the faithful gathered in to receive the lesson.

And, Man, were we taught. 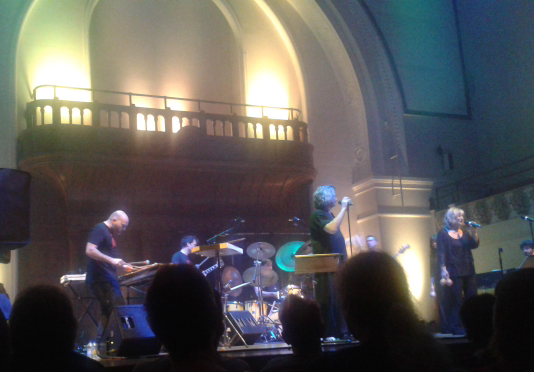 As the lights dimmed a hush descended over the hall, everyone waiting in the almost eerie silence with expectations rising. The sparse stage set-up (as it was when I first saw Magma in France in 2013) put the five musicians in a horseshoe around Vander’s drums with the vocalists in front. With everyone wearing black, the musicians in matching Magma tour shirts, the octet made an impressive spectacle as they emerged from the door in the Cadogan’s impressive wood panelling at the back of the stage and took their places to loud applause. Anticipation grew as they prepared themselves. Finally, after a call to attention from singer Hervé Aknin, the cacophonous chords and thunderous drums of Köhntarkösz erupted, the sound absolutely spot on as it remained for the rest of the show; great clarity and not too loud, the full power of the band displayed with the subtlety to hear each of the contributions.

Appearing a little nervous to start, Aknin soon settled into his stride in a piece that beds in the vocalists and stretches out the musicians. It is an orchestral piece in scope so the location was more than fitting, Vander’s mixing of jazz, classical and the avant garde creating a devotional music of real depth and ingenuity, a modern classical music for a rock audience. 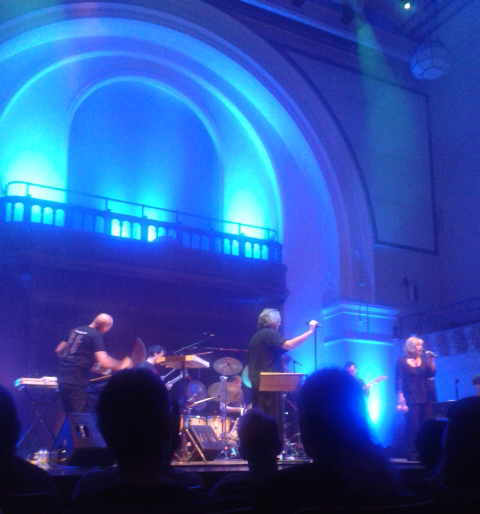 Benoit Alziary used a violin bow to tease delicate sounds out of his vibraphone, his dexterous abilities on the instrument exploding into life when required in a true display of skill throughout the entire performance. With the electric piano of most recent recruit Bruno Ruder coupling with the vibraphone to add textures the sound filled out beautifully, James MacGaw’s guitar adding to the ensemble feel although his contribution felt more upfront than for the 2013 gig, possibly due to the changes in the setlist to more in your face material. Towards the end of Köhntarkösz he really let rip in a blistering solo section that was lapped up by the audience and seemed to galvanize the rest of the band to reach for even greater heights, as did the well deserved applause they received at the end of the piece. Stella Vander spoke for the first time regarding Köhntarkösz, saying that despite being written in 1973 it was still ahead of its time. She’s certainly right and it all sounds so unearthly that it must have been beamed in from a time and space unattainable to all but a few composers. Unlike other music from the early ’70s there is nothing to date the music of Magma and it exists apart, a timeless repertoire of wonderful and truly progressive music that retains a futuristic appeal.

Next up, cheering greeted the familiar minimalist and militaristic introduction to Mëkanïk Dëstruktïẁ Kömmandöh. This is the piece that probably underlines what Magma are about most successfully and is rightly one of their most popular works. There is Glass and Reich minimalism in the variations as the piece evolves, pounding rock, dexterous jazz and the choral vocals are a joy as Aknin blends with Stella Vander and Isabelle Feuillebois. All of the vocalists get their chance to shine throughout the evening but it is the intricacies of some of the choral sections here that really get the hairs on the back of the neck rising. This has got to be some of the most difficult music around for a singer to perform and all three take it in their stride in an unbelievably compelling performance. Stella Vander’s solo sections are simply extraordinary and she comes across as one of the coolest people I’ve ever seen on a stage, there is a calm majesty about her performance with a warmth that matches her perfectly pitched vocals. 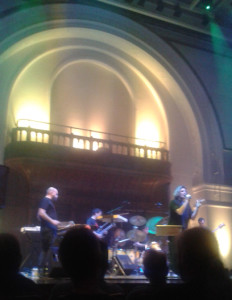 Christian Vander has remained true to himself and now has the talents and technology at his disposal to do true justice to these weird pieces of music from long ago.

Watching him perform is a complete education. He lives every note; his facial expressions accentuating his movements, sometimes entering a trance-like blissed out state. A true force of nature, his jazz background is there for all to see as he drives the music around him, the generator at the centre of the majestic sounds, adding little variations and moving the music in new directions. M.D.K. gave him the chance for his solo vocal section, a more melodic affair than last time with less scat that demonstrated the richness of his vocal. Legendary and enthralling, Vander was just superb, the heart and soul at the core of everything.

With rhythm driving the music forward there is a primal quality that pierces your soul. With a history and discography as impenetrable as Magma’s it is a daunting prospect for the newbie to get to grips with their music but it is well worth the effort and it is in a live setting where it all comes together to make complete sense, just watching Vander and his colleagues create this music is a joyous experience that draws in the listener. This is where the magic happens. 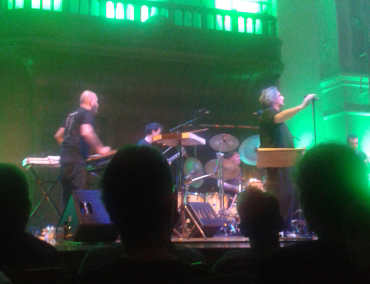 Another key element is the other-worldly wizardry of master bassist Philippe Bussonnet who matches Vander note for note in intensity, bending notes and playing devilishly intricate basslines with the power of their original creator, Jannick Top, but bearing his own stamp. Bussonnet was just spellbinding and put in probably the most impressive bass performance I’ve ever seen, taking his cues from Vander’s playing but then nailing down the sound to allow Vander the space to explore before heading off on a flight of fancy of his own. A fascinating and compelling performance.

After the standing ovation that followed M.D.K. we got the jazz-metal of Slag Tanz, Bussonnet and MacGaw locking in at the start, soon joined by a superb Aknin in a blistering performance with MacGaw spitting out his lines one minute, beautifully matching Stella’s exquisite vocal the next, gripping the audience and the perfect way to end such a sublime set. Hypnotic. 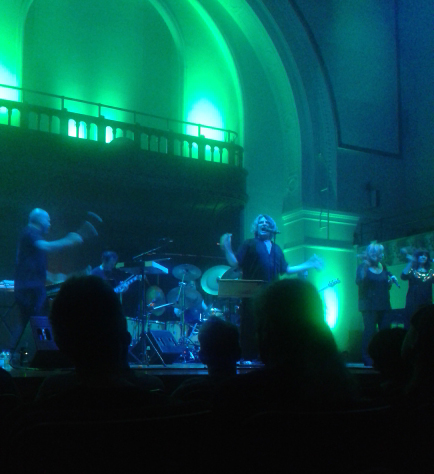 Another lengthy standing ovation and the band left the stage with the cheering following them until they returned, Stella introducing the band before an intense encore of Zombies which included some simply jaw-dropping work from Bussonnet. And then they were gone.

Throughout the show the simple yet effective lighting coupled with the wonderful architecture of the Cadogan made the show complete. With only four lengthy pieces on the setlist the two hour show flew by, every single second of it a delight and I just yearned for them to start again from the beginning and do it all again but that was that leaving some stunned people standing around the hall taking it all in and trying to put into words what they’d just witnessed. 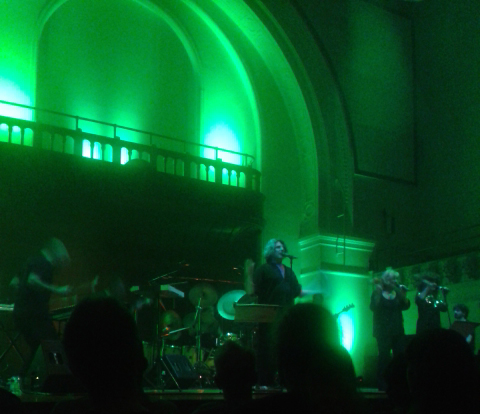 Stella suggested that Magma might return to the U.K. next year, let’s hope that it happens. If so they have found the perfect venue in Cadogan Hall.

‘Unique’ is indeed the right word, as is another – ‘Unmissable’. 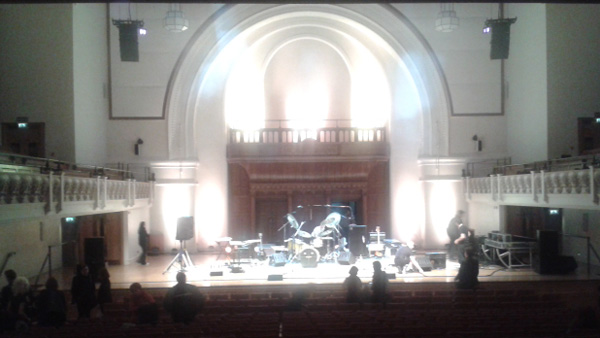