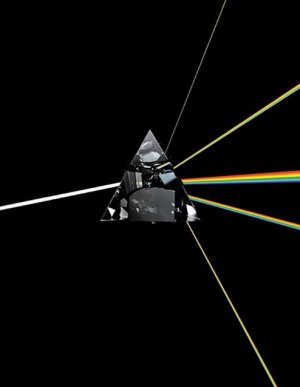 A healthy queue greets my arrival at the magnificent Victoria and Albert Museum. Having played around with the online booking system, it was pleasing – and a little surprising – to discover that booking for most days during the week appeared to be down to a final few tickets. Three years after the release of their final album, The Endless River in 2014, Pink Floyd remain one of the most iconic, influential and successful bands with worldwide sales in excess of 250 million albums. To warrant such an extensive exhibition at the V&A and come close to selling it out is both an impressive feat and testimony to their ongoing appeal.

Nor should there be any surprise in the extravagant advertising which supports the exhibition: “Experience a spectacular and unparalleled audio-visual journey through Pink Floyd’s unique and extraordinary worlds, chronicling the music, design and staging of the band, from their debut in the 1960s through to the present day.” Such extravagance, attuned to the spirit of the band’s own expansive and flamboyant designs is certainly justified. Armed with a pair of Bluetooth Sennheiser headphones, you ‘experience’ an immersive journey which is, without doubt, beautifully conceived and intelligently delivered. 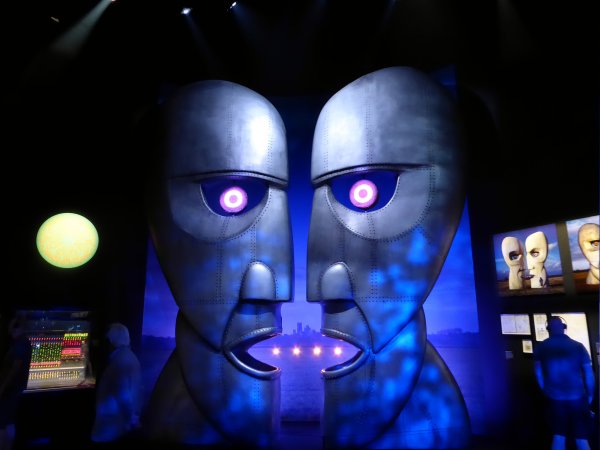 The headphones are actually key to making the exhibition such an engaging success. Without them I suspect you would have little more than a fairly dry walking tour of vaguely interesting historical displays of instruments, props, pictures and sundry artefacts. The V&A’s unquestionable brilliance is in making the band’s music the central feature and soundtrack of the tour and combining it with inspired lighting, a fascinating diversity of formats and displays and some exceptionally clever set-piece exhibits. 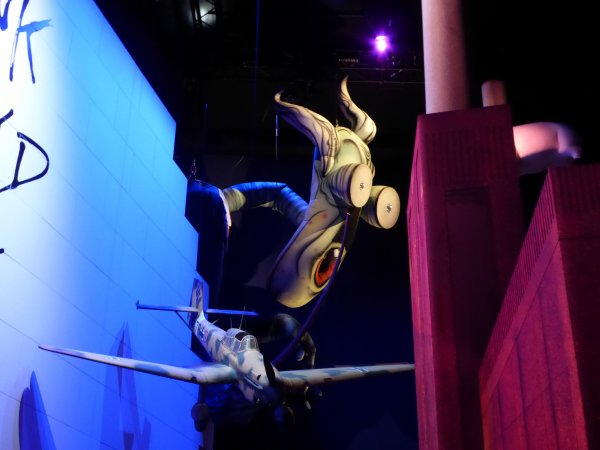 How it works takes a while to get used to but you quickly get to grips with the fact that everything you hear is triggered by where you are. The exhibition is arranged over eight chronological zones, each zone marking a distinctive stage in the evolution and development of the band. As you move between zones, the music of that period becomes the generic accompanying soundtrack on your journey. Approaching a specific display will trigger a corresponding piece of music; approaching one of the many TV screens built into each wall triggers a two or three minute interview with the band, or producer, or documentary style clip. 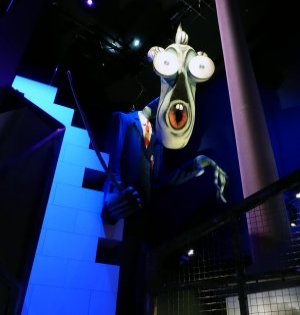 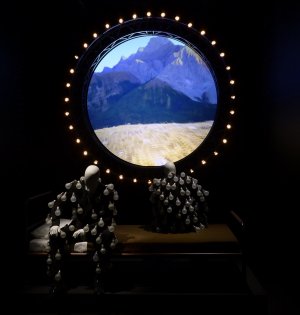 Combined with the creative use of lighting along with some ingenious holographic projections and 3D images, the overall effect is quite remarkable and strangely moving. It’s not until you see the band’s history laid out from beginning to end in such a clinical but compelling way that you truly begin to understand just how significant Pink Floyd are both in the context of British music as well as their undoubted impact on the world stage. The ‘Punk vs Pink’ section will certainly bring a smile on seeing Johnny Rotten’s “I Hate Pink Floyd” t-shirt again. 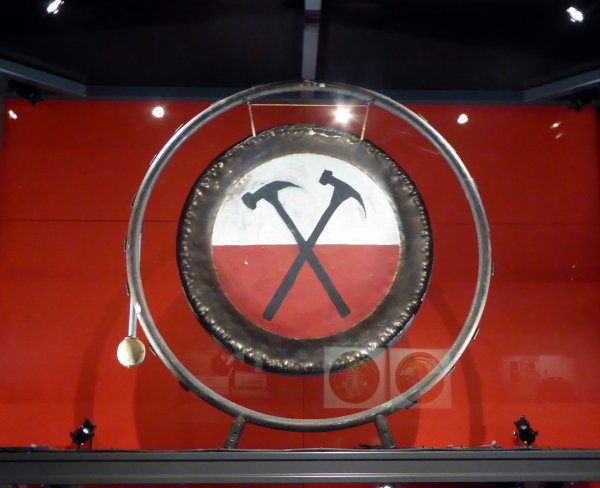 What is perhaps striking amidst the various displays and visuals is just how little we actually see of the band themselves. Whilst there is an excellent and deserved tribute to Syd Barrett, a lot of the exhibits feel strangely ‘academic’ and a little impersonal, with the rest of the band content to remain quite firmly in the background. Instead they seem quite happy for their ‘identity’ to be channelled through the hugely significant relationship built with the Hipgnosis studio and the exhilarating designs of Aubrey Powell and Storm Thorgerson. When you think of Pink Floyd you normally think in terms of images; 1973’s Dark Side of the Moon prism, 1977’s floating pig and the Battersea power station (Animals) or even 1979’s cane-wielding school teacher and the simple white bricked wall (The Wall). 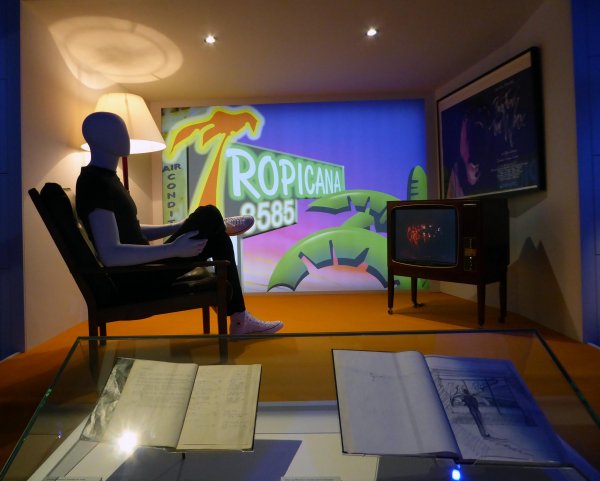 Pink Floyd seemed to intuitively grasp the inherent connection between music and striking visual imagery, forging everything they did around building conceptual hooks which would allow them to combine the two in changing and expanding relationships. This in turn became a catalyst for pushing the boundaries of technological innovation in the way music is created and played, developing a distinctive architecture for live performances and even driving aspects of social and cultural fashion design to accommodate the message of each album. 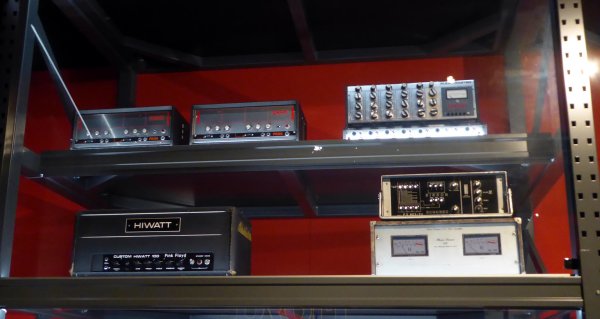 The exhibition ends in the performance zone and I urge you now to wait and see it all from start to finish. Sennheiser have created a fabulous digital surround experience which is simply jaw-dropping. Part of that experience is the live performance of Comfortably Numb recorded at the band’s reunion concert at Live8 in 2005 and will damn near leave you speechless by the time it is over. It is a poignant reminder of the simple power of music, the contribution of this particular band in pioneering so many developments in the way music is conceived, presented, played and performed and a testament to the perceptive inventiveness of the V&A in creating such a powerful experience.

Well worth a visit. 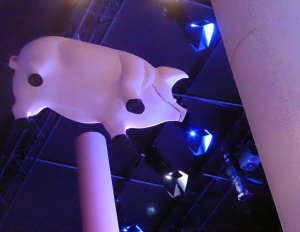 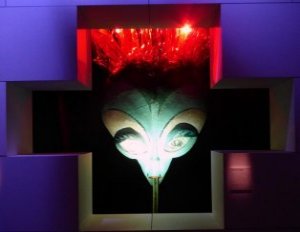 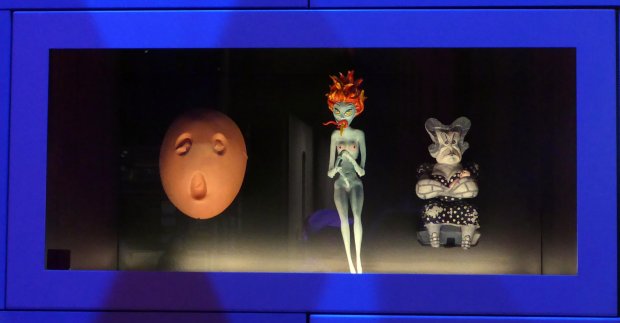