There’s very little that comes to this neck of the North East so the opportunity to catch three “proggy” acts at one event is surely one not to be missed? But I nearly did, as it was the first free night for me in a fortnight, so my thanks to Steve (The Progmeister) Petch and Johnny Blakey for convincing me that I didn’t really need a night in. Although in reality I think they just needed me for my assertive, if non-existent navigational skills to direct them to the venue – which I did admirably, even if I hadn’t a clue where it was. They worked that out too…

Darlington’s Voodoo Café is an interesting venue – cocktail bar with occasional disco on the ground floor. The second floor is a Mexican themed restaurant (have to say the food looked and smelled very appetising) and the top floor a sort of WIP empty room, complete with woodchip wallpaper – those were the days… Despite the somewhat Spartan layout, the room’s decor became irrelevant as the evening wore on, in fact the large sash windows being open, not only let in a cooling breeze, but along with the bustling atmosphere of the street below – a nice ambience.

First up was Newcastle based, singer songwriter Jack Arthurs who performed, amongst others, songs from his Treasure House album, released early last year. His voice was endearing, if not a little fragile, but it worked and the audience soon warmed to him. Employing an alternate tuning on his guitar the songs were delivered with heartfelt passion and in a relaxed manner that drew the audience in. I particularly enjoyed his guitar work, with the power of the more aggressively strummed parts nicely countered by some delicate and tasteful picking.

The “ZiLlA Night Acoustic Delight Ish” evening was arranged and presented by Progzilla’s Emma Roebuck, who, along with the artists certainly deserved a better turnout.

For those who did attend however, they were treated to a rather unique evening…

Next to take the stage Andy Tillison, who in his gentle and amiable manner performed a set that perhaps surprised some, but delighted all. There is little doubting Mr Tillison’s keyboard skills, but his more exposed performance, on this evening, was truly sublime. Tracks from The Tangent and PO90 were intermingled with partly improvised pieces from blues, jazz and rock fields. He even looped some bass and basic chord structures to allow him the freedom to improvise…

Despite Andy apologising that he had not been able to practice as much as he would have liked prior to the show, due to a wrist injury, I seriously doubt anyone would have noticed as he thundered and caressed through his all too brief set. I certainly could have sat through a whole evening of Mr T. The stripped down versions of The Tangent songs, as might be expected, received the warmest reception – Andy’s impassioned versions on this evening were truly inspired.

A tough act to follow, so how would Mr Slatter fair? Well by design or happenstance all three acts were so different that despite their disparate nature, the flow of the evening seemed natural and complimentary. So he fared very well.

Now I have no idea what Steampunk is – musically at least, not that it matters. I mention merely as it is a tag I have seen regularly attached to Tom Slatter – and possibly why I never really checked him out until the release of Happy People earlier this year. A delightful album it is too, if you’ve not heard it.

Tom is a bit of character, and his warm smile and quirky delivery certainly resonated with me and the gathered masses. Catchy songs, with enough charm and whimsy to have you singing along – despite the underlying darker nature of much of his material. A bit of an exclusive for Darlington in that Tom was joined, for the first time live, by guitarist Gareth Cole, who supplied some meatier electric guitar, fleshing out Tom’s acoustic.

According to Tom we are not supposed to be happy with his music? But with lyrics such as these from the title track of Happy People…

“Don’t you want to feel safe for a while?
Pull another tooth out
Give us all a smile”

You’ve just got to grin…

Many thanks to David Stook for the photographs used in this Concert Review. Oh.. and one from Steve Petch. 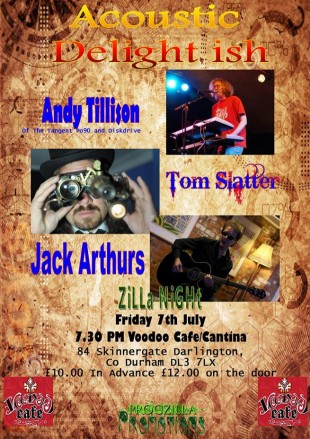