It takes a person of determination, enthusiasm and drive to set up their own festival. To keep it going for five years also requires resilience to repeatedly overcome the unforeseen and continue to take the required leap of faith each year. Such a man is Ian Fairholm who has in EppyFest (named after his Epileptic Gibbon podcast) curated a particularly relaxed event with a welcoming family vibe. This was my first time but, like the larger Summer’s End, the atmosphere and friendly environment overrides any previous knowledge of the acts who are actually on the bill and I’m prepared to rely on the judgement of the organisers. All things panning out successfully, I’ll certainly be there next year.

The setting in the beautiful Gloucestershire market town of Stroud does EppyFest no harm either, and on a sunny day, like the one enjoyed by this year’s festival, it’s a lovely place for an afternoon stroll before the evening’s entertainment. 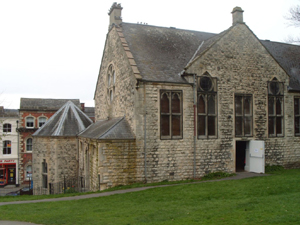 Being a one day event makes for a more manageable proposition than some of the longer festivals that take up a whole weekend, and with a 4pm start time it’s an unhurried day. The venue, Lansdown Hall (the same one used for the inaugural and, so far, only Winter’s End Festival in 2010), is ideal with plenty of space for the 50 to 70 in attendance: this is a small event with no apparent intention to grow outside its current parameters – and quite right too. 50 chairs are laid out in the centre of the hall, bar and mixing desk at the back, merchandise tables and ticket desk at the side. Simples!

The event itself is fine enough in itself and coupled with the many meetings with friends old and new it’s a lovely day with plenty of time for a chat over a bottle or two of the very tasty local ale, but what of the music? Six disparate acts covering a lot of ground, largely edging on acoustic territories but with the scope to give it some welly where required. This is not a prog festival per se, selecting from artists of true quality who produce interesting music that doesn’t fall under a specific genre classification. Given the variety on display a massive raising of the headgear is due to sound man extraordinaire James Heathcote as the levels and clarity throughout the evening were superb.

First up, a Bad Elephant in the shape of Tom Slatter and his trusty guitar, purveyor of steam-punk unusualities and possessor of a cheekily glinting eye. The stripped-down versions of songs from his Fit the Fourth, plus others that may not see the recorded light of day until the album after next, are a lovely way to start the evening and Tom’s playful persona put everyone in a good mood. Nothing if not productive, he is mining a rich vein of form with these current and future songs and I’m looking forward to his next releases with anticipation. 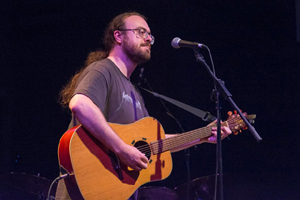 A complete left-turn with the next artists, Darkroom. Ostensibly a duo comprising guitarist/looper Michael Bearpark and bass clarinettist/synth man/sound whizz Andrew Ostler, for this show they were joined by Turkish guitarist and musical sculptor Hazal Elif Yalvaç. The ambient improvisational soundscapes created by the trio, across two lengthy pieces currently known as Side A and Side B (although the latter was referred to as Hospital Guy), were quite captivating from my seat in the centre of the hall and it was fascinating to watch their creative process at close hand, the music produced often bearing little resemblance to the instruments being wielded. Textural and unhurried, the pieces evolve with fragments of melody appearing, developing and then evaporating. A cleansing and thought provoking performance which I am glad to have had the opportunity to witness. 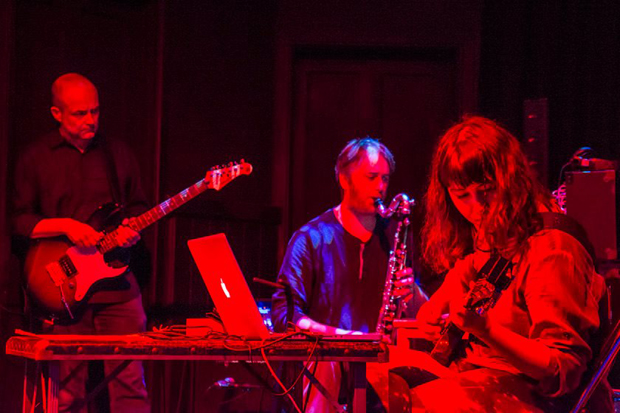 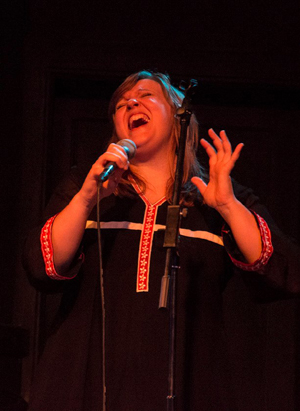 Third act up and closing the very enjoyable first half were the Sirkis/Bialas International Quartet who took the music in another new direction – jazz-based with added folk and world music influences. Led by renowned Israeli drummer Asaf Sirkis and Polish vocalist Sylwia Bialas, both of whom compose the music, the London-based quartet created an inspirational set of heartfelt, emotional songs and vibrant soloing with Sirkis’s off-kilter rhythms lending it an unusual characteristic. With improvisation at the core of a number of the pieces, Sylwia’s vocals were often quite extraordinary. Asaf’s unorthodox choices, deployed with a skill and precision that demonstrated his technique, were bolstered by a section where he sang in the Konnakol style of traditional Indian vocal percussion. The addition of this “sound singing” and solo sections where electric bassist Kevin Glasgow and keyboardist Tom Hewson could also shine saw the quartet working together beautifully. With another very well received set the first session had given the audience plenty to process over the dinner break! 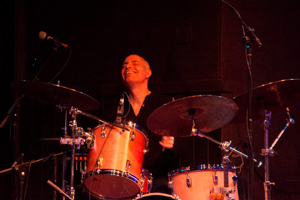 Another wonderful thing about EppyFest is that Ian takes the trouble to put on a sit down meal for his guests, by ticket due to the demand as there are only about 25 places, in the room below the hall. This attention to making it a close-knit gathering is another reason why this intimate festival is so enjoyable. The rest of us strolled out into the town where a particularly good meal was located at the Rajdoot Tandoori.

With the second half due to run from half past 8 until 11, we were back at the hall just in time, only to find that the soundchecks were overrunning and we had to wait outside the hall for a while. Not a problem though, the balmy evening making this no hardship whatsoever.

Upon the re-start we were treated to Marvin B. Naylor who enthralled with songs accompanied on his 12-string guitar. A name previously unfamiliar to me, Marvin has been playing for many years, in fact it turned out that this was his first proper gig in 12 years – it didn’t show and he immediately won the audience over. His fingerstyle picking was wonderful to watch and he has a great voice to match it, singing his intriguing songs in a humble and warm manner. Appearing quite nervous at the start he soon settled in and finished the set with an acoustic version of David Bowie’s Space Odyssey which included some audience participation and went down exceedingly well, a fascinating recreation of this classic by one man and his 12-string. Highly recommended. 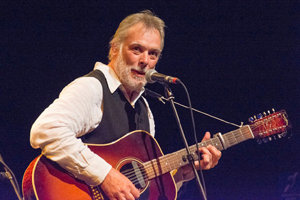 Co-headliner for the event and last but one act on, Judy Dyble performed with her Band of Perfect Strangers, also to have included a violinist who unfortunately had to cancel due to illness. The Strangers backed Judy in a professional and accommodating manner, allowing her the space to take centre stage where she stood, tightly clutching her folder of lyrics. Her voice has lost none of its purity as she sang songs from her Flow and Change album and some new pieces. Most of the songs hit the mark, Judy’s lyrics beautifully descriptive and often of a highly autobiographical nature which was endearing, although a couple just didn’t work for me. No matter as the finale of Giles, Giles & Fripp’s I Talk to the Wind was wonderful and quite beautifully done. A renowned song from long ago done full justice. 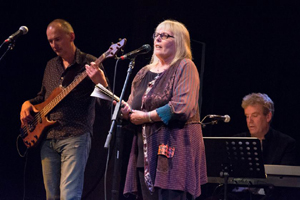 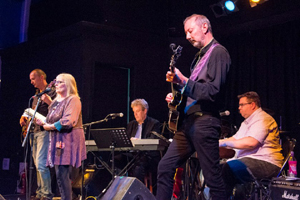 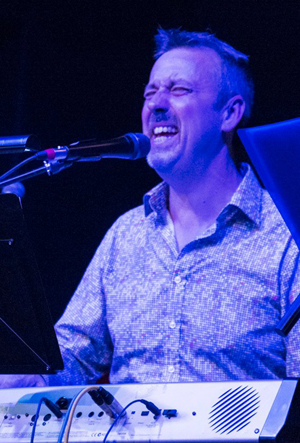 Well over time now but eventually we got to my most anticipated set of the day, the mighty William D. Drake. The last time I saw Bill play was in 1984 as keyboard maestro with Cardiacs. I was a callow 18 year old and didn’t get it. The penny finally dropped in 2007 and I now massively regret the lost decades in between; if I had perhaps been listening harder on that first encounter the intervening years may have been very different! I’ve made attempts to see him again since my reawakening but cancellations, poor timings and other misfortunes have always stood in the way. Until tonight – and I was in no way disappointed.

Bill has assembled a fabulous band to play his eccentric songs, a group of players who can successfully navigate the twists and turns whilst adding their own stamp. The wind instruments and wheezing sounds of the hurdy gurdy brought the quaintly English songs to life, backed up by solid rhythms and the oddly scything guitar of Richard Larcombe. Andrea Parker shared lead vocal duties with Bill and got her own place to shine on Castaway, elsewhere most of the players formed a choir who were spot on in their delivery. Bill, despite a bit of a sore throat, was an engaging host and the band have the quirk factor in spades as they batter, clang and swoon through a splendid collection of songs from Mr Drake’s stunning The Rising of the Lights and Revere Reach albums, a masterful The Mastodon being a highlight. Melancholy World from Briny Hooves was the final song but before this we got a disturbingly psychotic reading of The Teddy Bear’s Picnic – genius and brilliantly realised. A superb set and I sure as hell am not going to leave it another 32 years before catching Mr Drake tickling his ivories and voice box once again! 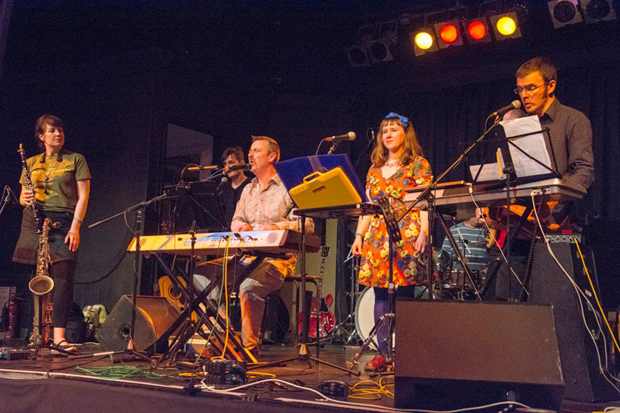 Ian does the “thank you’s” and brings the festival to an end. It has been a wonderful day. A look at the watch, it’s approaching half past 12 – oh dear! Timings on these things are always going to be loose at best and no one would have curtailed it so off into the night we happily go, hearty farewells and talk of EppyFest 6 ringing through the quiet Stroud streets.