Why are we here? My reason is that Genesis in Belfast was rescheduled, so I am going to get the most out a weekend, and where better than The Bedford Hotel, Balham. Tastefully refurbished, it plays host to our six acts today, a challenge somewhere between perfection and herding cats. A logistical success, as they say; we are all in this together.

Entry achieved just after doors open and straight away the expected exchange of banter with Tom Slatter occurs. Always a good opener, this time he excels. 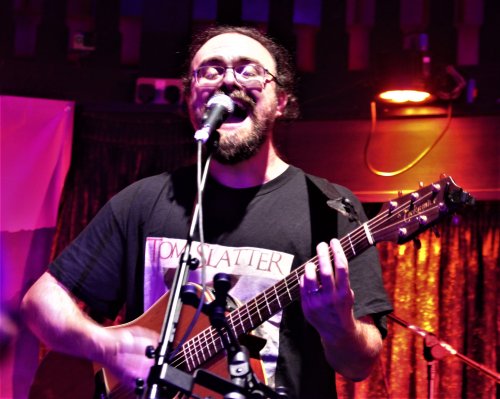 With music and themes just to the right of madness, our steampunk sci-fi troubadour begins with Some of the Creatures Have Broken the Locks on the Door to Lab 558, from 2015’s Fit the Fourth. 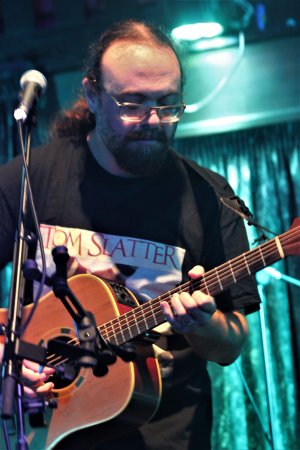 Impressive already and the early audience, who are mostly familiar with Tom’s work, welcome him warmly. Extinguished, he continues with a set of both old and unheard, bold like Radiohead in presenting the new to his audience. He promises pared down but the new epics are in the prog tradition and he delivers. The new is sounding good and I look forward to the album when it appears, in true Slatter tradition, somewhere on an undefined date in the future. [Tom’s Escape album appeared on 1st October]

The new material, even in its pared down form, bodes well for the album. Time Stands Still is a wonderful new tune. With the last two years in mind, our songwriter has decided that escapism is in order. It was a wonderful set from Tom, and I was touched by the tribute he made to supporter Andy Hall, who sadly passed recently, with the dedication of Flow My Tears. Only five songs but great fun and you should get along to see him if you can.

01. Some of the Creatures Have Broken the Locks on the Door to Lab 558
02. Three of an Imperfect Pair
03. Time Stands Still
04. Wizards of This Town
05. Flow My Tears, the Policeman Said

Second act was Hat’s Off Gentlemen, It’s Adequate, performing as a two-piece and awakening the room after the previous acoustic set. Using many electronic toys, Malcolm Galloway, with support on bass from Mark Gatland, delivered a blistering set. Nostalgia for Infinity receives regular plays and I’m always interested in new material from them. 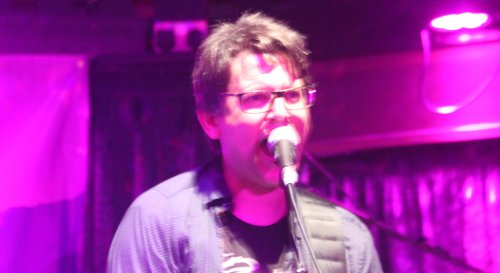 Obscure sci-fi authors are name checked as Master Galloway introduces each song; pared down HOGIA are no less powerful than the full band, as the first number demonstrates. It’s amazing what a lead, a bass and an iPad can deliver. Silence is a Statement is guitar driven on this occasion and shows the broad scope of modern prog; without much effort you can dance to it. First author – Alistair Reynolds. There is a dark edge to the music, but an infectious rhythm; if you liked Anathema, I suspect you will like HOGIA. 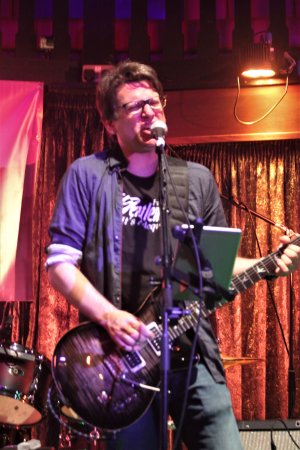 Mark’s bass provides a solid support as Malcolm bends and blends his notes. Century Rain is great, it reminds me slightly of Moby’s Extreme Ways, used on the Jason Bourne film series. Played with a funk touch it is joy music for dark lyrical themes. We get one new song in the set, The Confidence Trick, about how apparent confidence can cover many cracks.

The new, and the almost familiar, it was a notable set and I look forward to both new material and a gig with a full band.

Sadly, due to personal circumstances, The Gift had to withdraw from performing. Instead singer Mike Morton stepped up with keyboardist Howard Boder of The Book of Genesis to perform as The Gift of Gabriel (plus one track from The Gift). With songs from across Peter Gabriel’s catalogue, it was a great recital; I had forgotten how powerful these songs are. On the Air commenced the set with Mike revealing his inner Gabriel. Peter’s voice has changed over time, and its depth and timbre now contrasts with his voice back in 1977. Mike delivered this range well, emphasising those words that stood out in the lyrics. Given only two days to rehearse, it was an amazing output. 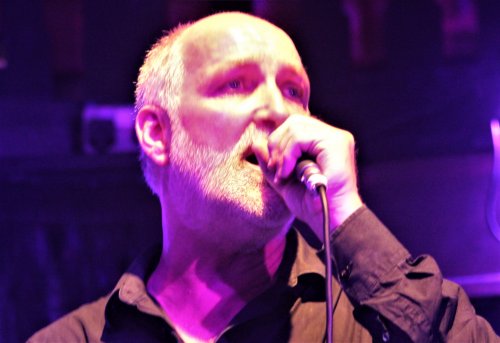 I know the words verbatim, and to the dismay of those close to me, I did join in as Howard and Mike skipped through 40 years of material. The author of these songs is currently silent, the long-awaited next album remains on hiatus, so just to hear these songs voiced live again is a gift; Mercy Street, Humdrum and Secret World deliver lyrics that ripple through The Bedford’s atmosphere, causing motes of dust to settle in my eyes. The Tallest Tree, The Gift’s opus to lost loved ones and family, does the same.

The interlude to the established concludes with Solsbury Hill (now divided by a new road) and Biko, a memory of apartheid, and now a prayer for South Africa’s future. You may indeed “blow out a candle, but you can’t blow out a fire”. Chatting with Mike later, he mentioned a couple of songs unrehearsed that they left out, Wallflower, I Have the Touch, and that they might do more with full bands in the future. I look forward to more from The Gift of Gabriel.

IT were a band I’ve wanted to see ever since I heard their last album We’re All In This Together. I bought it after hearing a track and was not disappointed. Then I missed their appearance with The Gift in 2019, which was followed by the last two years. By far the most rock of all the acts on this Sunday, I thought they were brilliant, even though my knowledge of their material was limited to the one album. The two founders both have a strong and strange presence, with Nick the lead vocal being a charismatic frontman. 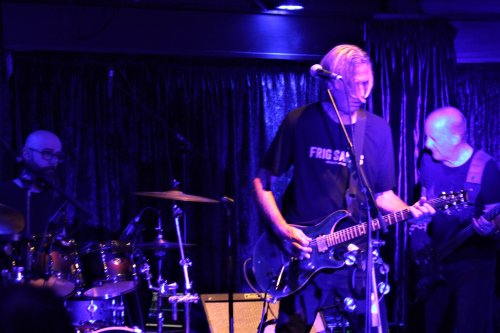 It was another notable set and an effective way to close off before the meal break. Wishing I had taken advantage of the merch deal I will visit their web page and make amends for my hunger causing me to miss out. Three albums and a live one so you can get a sense of what we witnessed. The Path of Least Resistance was the track that drew me to the band, and it is no less potent in a live environment, from their repertoire of several years I could not find one weak track and I look forward to seeing them again. 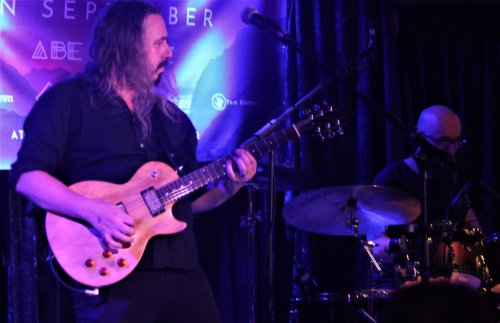 Breaktime, food consumed and back to the Bedford for the last two acts. Technical difficulties delayed the start, unusual for The Bedford, and sadly this persisted throughout the performances. The nature was, I would say, that the drums were too dominant in the sound; something to which a more vociferous member of the audience agreed.

The Emerald Dawn have produced my favourite album of 2021 to date, so to see them live had been eagerly anticipated, and despite the issues, they were everything I expected. A band with quiet passages whose performance excelled when the drums fell silent. Tom, on drums, was controlled and nuanced, and given that it wasn’t his kit, he did a brilliant job. It will be great next time Tom, as I gather that the band have been booked for A Sunday in September 2022. As Darkness Falls was our entry into the land of The Emerald Dawn, as the keys and vocals of the repatriated Tree Stewart filled the air, the high ceiling and general ambience just added to an ethereal performance. Compliments between voice and composition were exchanged; when drum free, magic occurred. 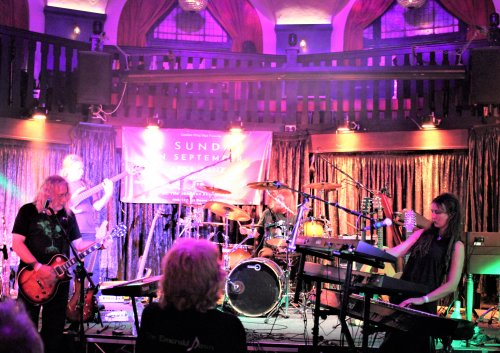 Solos play a part in their performance, but don’t overstay their welcome and it is the collective cohesiveness that make The Emerald Dawn a band to listen to and, if you haven’t yet, explore. I Stand Transfixed is an apt title that, even with issues, holds its audience in the palm of its hand. On disc it creates an atmosphere, live no less so, and I anticipate that the vinyl, due in March next year, will as well. The Roland’s combine, guitars soar, bass directs, and drums (even loud) shape. This is the band’s first London gig so the next piece, I like to think, has a hint of irony; Stranger in A Strange Land. 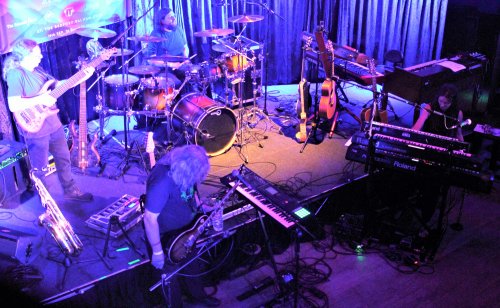 I will at my next opportunity see them live again sans problems, hopefully, as a too short set closes with The Child Within. The Emerald Dawn are a band that nods towards their influences yet produce material of the here and now. With four albums to date, they have grown in stature with each one, and though I know that album five will be different again from To Touch the Sky, it will only add further dimensions to their music. 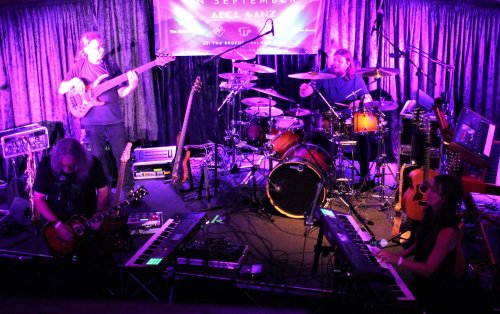 And finally, though no less anticipated, Abel Ganz. Also London debutants but seen previously at HRH Prog. I love the music, which in my view is quite gentle, but that is not to deny their ability to rock when needed. I do find their sound good to chill with. Denis Smith played drums and demonstrated the consistency, which is a constant with progressive bands, loud, experiencing the issues that troubled both acts. He and the band produced a set that entranced their audience, some of whom were familiar enough to sing-along. I can see why their latest album The Life of the Honey Bee and Other Moments of Clarity is considered one of the greats of last year.

The Life of the Honey Bee was the first track played, already enhancing the queue for merchandise, and though my ears dealt with the sound issues, my heart and mind were already being won over by the set. Let’s hope they receive a few more invites south. Mick McFarlane was in fine voice, the depth and strength apparent in those moments without instrumentation. For a first venture south, and despite trials and tribulations, Abel Ganz acquitted themselves well, closing with Thank You, a track I find quite beautiful, and still so even when the band played it with a slight country tinge. 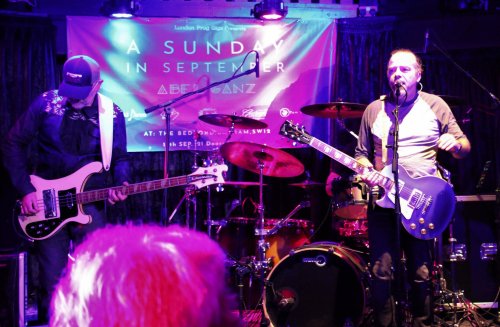 A Sunday in September is already entered into next year’s diary, when I will look forward to seeing The Emerald Dawn again, plus all the other acts that promoter Chris Parkin books. The Bedford is a lovely venue with an intimacy resultant of the proximity of act and audience. A fair crowd for a day of great music and with a little more capacity for next year; with the transport benefits and local eateries for that all important break, Balham will welcome six more acts in 2022.