KNIFEWORLD AT THE LEXINGTON
Or
An Adventure In That London With A Gentleman And Some Music. 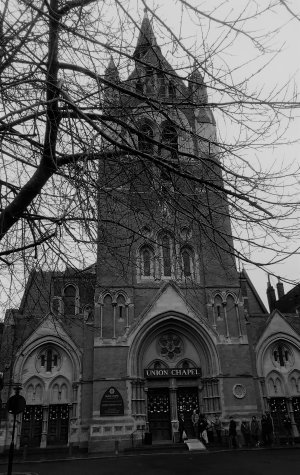 It was a winter’s day of contrast and light, pummelled by cold winter rain, but illuminated in so many ways. My companion for the day, Spike Worsley, met me for some early morning coffee in King’s Cross, London N1.

We battled through a mildly damp English Capital to the stunningly beautiful Union Chapel, Islington, for what turned out to be a bit of a sing-song and some gentle folk music. Outside we bumped into the charming Big Big Train bassist and Rock Star, Greg Spawton and his wife, Kathy who cheekily used the opportunity to jump the queue (I’m teasing, Greg) whilst preparing for some industrial espionage. He watched avidly.

“Genres don’t mean anything these days”, said Daylight Music event organiser Ben Eshmade of Arctic Circle during his announcements between acts. I like the cut of his jib.

Contrasting light from tungsten and the stained-glass-filtered grey winter daylight illuminated some mature performances, by musicians whose muses have perhaps never subscribed to being shackled by testosterone fuelled rock anger. I heard songs about failed relationships and politics, songs about the weather and guitars and more failed relationships and missed gigs. Plus, some sad stuff in happier keys about loss, but nothing about apples or hedges.

Not that prog gigs are renowned for their chaotic last-days-of-Rome-style debauchery but to highlight the contrast: the merch desk sold a “famous” quiche.

The Perfect English Weather (two members of Jangle Pop band, The Popguns, sang about their sadness at missing a Morrissey gig (go figure) and Helen McCookerybook (Helen And The Horns) channelled Johnny Cash into sad songs about psychotic bicycles, LSD and the loss of loved ones. In a happy way. Endearing performances by both acts. Topping the bill, Fairport Convention legend Judy Dyble. 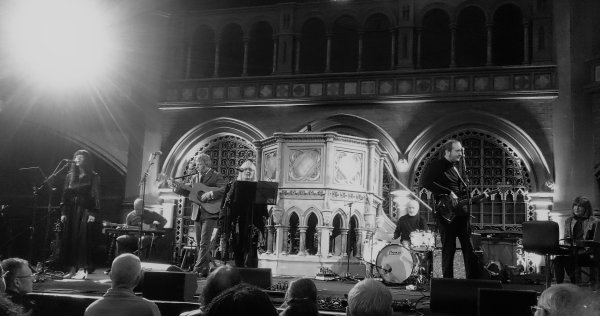 All of these acts were all wonderful to see, and I began to understand the allure of this music.

Then we walked in the rain through an Islington, still pungent with the aroma of champagne socialism and gentrification, to a gastropub for a late lunch before another nice walk back to King’s Cross, as daylight left us, to check out a few of the somewhat underwhelming but nevertheless pretty Lumiere exhibitions.

We cut this short for a quick coffee and then walked back to The Lexington, Islington N1 for the main reason I was in that London:-

I came to Knifeworld backwards. Instead of through Cardiacs and Gong I came to them through North Sea Radio Orchestra, the solo works of Emmet Elvin and Charlie Cawood. I’ve done reviews on The Progressive Aspect for some of the stuff that these artists have put out but Knifeworld, somehow, remained at the edge of my radar. I don’t know what stopped me. I only recently got hold of their stuff and listened avidly. And I was about to pop my Knifeworld Live cherry.

The venue is above a pub. The pub was riddled with some of the celebrities of the modern British Music circle. No Rock Star hubris here. The band were mingling in the bar below the auditorium. After chatting with lots of people I exchanged a few words with the lovely Charlie Cawood and finally met Emmet Elvin in person. (As if to re-enforce this impression of modesty; such is the charm of all of the band members that later on, Kavus, seemingly enigmatic during the performances, seemed tongue-tied with excitement at being there whilst trying to fill the short spaces between songs). Somehow the endearing nature of all the band members made the experience more enjoyable.

Spike and I gave our names to the attendant and a young lady branded the venue’s logo onto our wrist with an inky stamp thingy and we climbed the stairs to the venue proper. Small enough to be “intimate”, it is a split-level venue with two level areas for punters and a raised stage for the acts. The rear of the venue possibly has a bar (I didn’t really take much notice). The stage is but a few feet higher and connected to the floor by about 6 steps. A single pillar supports a huge beam that spans the width of the venue but it isn’t too intrusive. Spike and I fought through the crowd, cunningly positioning ourselves on the higher level, just behind the mixing desk.

Once more I experienced the contrast that highlights and adds to life’s rich tapestry as this eight-piece began with an acoustic set of ten songs and finished with an electric set. The band’s back-catalogue was well represented, I think. Physically tiny drums, hidden away stage left, accompanied an all-seated band as they performed the acoustic set.

The lighting show was minimal. It didn’t matter. The band is visually impressive in its own right. Perhaps a slightly larger stage would have benefited them as there were a lot of them on that stage.

The acoustic set was jaw-dropping. Sir Spike of Worcestersorcery was clearly speechless at the start of the 20-minute break.

I’m glad that bands see the value of an acoustic set. The songs still convey power and energy, but the mix was perfect, the vocals were clear and all the musicians could be clearly distinguished. So much so that as the acoustic set ended with the beautiful I’m Hiding Behind My Eyes from The Unravelling I started to wonder whether a more amplified version of the band might actually lose some of its clarity.

I needn’t have worried.

Knifeworld are a band with songs of a variety of complexities, catering, I postulate, to a demographic ranging from those brought up to the soundtrack of traditional Progressive Rock to the virtuoso. I confess that at times I could easily have been lost in a sea of astonishing and unexpected changes of time signature and chord progression. I’m sure, therefore, that everyone can get something different from their set. There’s no shame in admitting that any one song is a highlight, mine being I Am Lost. Even the less accessible songs that made me work hard were executed perfectly and even the most virtuoso virtuoso must have had his jaw dropped to his chest on this occasion.

Powerful and beautiful, Ben Woollacott had transferred his playing to a kit of normal sized drums for the second set. Even though these were big drums it was still a small kit with minimal cymbals and he demonstrated with aplomb that a great drummer doesn’t necessarily need a huge battery of drums and collection of cymbals to bring complimentary and percussive excellence to the table.

Was the gig flawless? No. Having said this, the odd hiccup at the start was no more than the band clearing its collective throat and so impressive was the rendition that followed that it is conceivable that no-one remembered it happening by end of song.

Charlie Cawood’s bass, the crisp woodwinds, Emmett’s keys polished and tight; despite the obvious time signature mindfuckery of songs like I Must Set Fire To Your Portrait (which just grooved), were all exemplary. I left the venue in awe of this band. Words were failing me. After the gig I mumbled something to Charlie Cawood as he kindly gave me the copy of his set list. I think I said something pathetically fan-boyish like “How can a band get this good”? I think he knew what I meant. He smiled and thanked me.

The thanks really all go the other way. This was a buzz. I left with Spike, blinded by the technical proficiency of these musicians. Astonished, even, that the fates had conspired to bring them together into a single band. Lucky to be inhabiting a World where I get the chance to experience a concert of this calibre.

What a day! I think I got a train home or something. 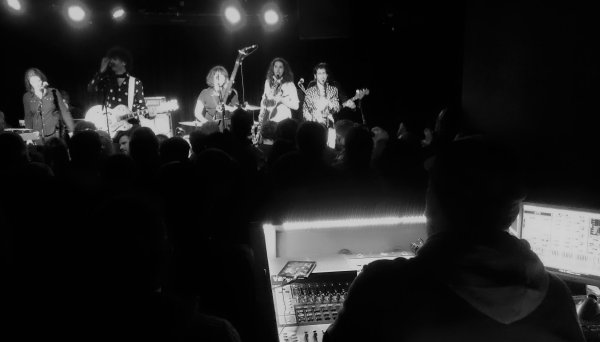