After a splendid day as a tourist in the company of my trusty TPA colleague Mr Phil Lively, during which we visited the Post Office museum and took a trip on their dedicated underground line, we later visited a somewhat overpriced hostelry (it was Islington, after all!) for some grub and a meet up and natter with two more fellow carousers. Eventually we made our way to The Garage for the early start. Barely had we got there at around 6:30pm, and the first band began to rise above the launch pad.

The Garage holds around 600 and was rammed for tonight’s shenanigans. It is one of those venues with the bar at the back of the room, and with designs like that it always follows that the incessant natter of bar hounds is inescapable. This being a gathering of the Clan Cardiacs and the event having an “end of term” feel to it, being the last gig of the year for most present, meant the increasingly booze-fuelled banter at the back of the room was probably the loudest I’ve ever heard at a gig, and it didn’t stop when the bands were playing either. One guy, during a quieter moment in Spratleys Japs’ set was heard shouting “SHUT THE FUCK UP” at the chatterers, not that it had any effect.

A lot of folk had travelled many miles to be here, and had no doubt had all day to meet up to chew the fat, and it does make me wonder why they wanted to continue shouting at each other while the bands were playing. Why bother getting a ticket in that case?! Not to mention the disrespect it shows both the bands and the majority of us who wanted to watch them.

Anyway, here’s what went down, at least for the two thirds of the audience who bothered to watch it!

Starting quietly, this Brighton band of Kosmische warriors, silhouetted against a groovy Cosmic Jokers psychedelic slide show, are led by one time Cardiacs guitar slinger Bic Hayes. They make an imperceptible, almost unnoticed beginning, building slowly to thunderous volume that even manages to drown out the incessant chatter-rumble from the back of the room.

Fronting a tottering mountain of electronic jiggery-pokery, wired together by a confusing basket of snake-like leads, Richard Gorbutt “plays” the understatedly titled “Modular Synth”, the whole caboodle looking like something Klaus Schulze stashed away in his garage in 1975. Next to him Al Strachan occasionally blasts away on a trumpet, but the noise that comes out of the speakers is unrecognisable as such, having been twisted out of shape on a journey through another piece of incomprehensibility under the name of a “Mono Synth”. Making forays around these two the conventional instruments gamely try to impose order, which they do intermittently, to supply a Can-like groove, on steroids. Marvellous! 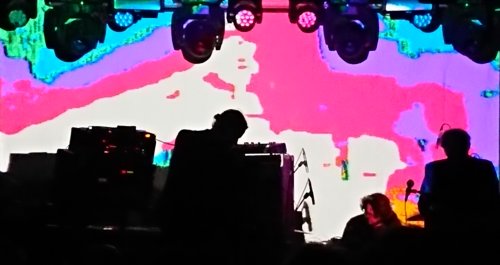 To the left of the stage as the audience look is one Terry Bickers, thus reviving his partnership with Bic, who was his guitar foil in Levitation, the best psych rock band of the 1990s. Terry will lend his howls and caresses to ZOFFF’s improvised swirls and pulses of sound to mighty effect.

Two long improvisations later, my companion Phil said “that was bloody awesome!”, and it most certainly was.

I have seen this organic synapse-altering conglomerate a few times over the last four years or so, but this has to rank as the heaviest I’ve heard them. A set extracted from the more direct numbers of their small but perfectly formed back catalogue was a wise choice for this audience of hardened Punky Psych Party veterans and it went down a storm. Kavus Torabi did that thing with his eyes, emitting laser stares into the middle distance, also giving his trusty Gretsch a good seeing to. Emmett Elvin’s piano stabs provided angular counterpoint to his haircut in all the right places.

Sometimes the horn section got a bit lost in the throng, and some of the harmony vocals wandered a bit, but I only write this in hindsight, for at the time no-one but a journo taking notes would notice. I suppose arranging the sound for an eight-piece support band is fraught with difficulties, and it must have sounded a lot different in an empty room.

The rhythm section comprising Charlie Cawood’s mesmerising bass runs and Ben Woollacott’s solid and unfussy drumming was a powerful beast and it needed to be, nailing the thing to the floor without ceremony.

The audience obviously loved it, and quite right too.

I admit that the stars of tonight’s bill are a band I am not at all familiar with, being a late entrant into the House of Cardiacs. Originally a Tim Smith side project they released one album entitled Pony a mere twenty years ago, which I have only heard a couple of times. Most of Pony was played tonight, along with a few new numbers, which I believe will see the light of day on a new album later in 2019. I will certainly investigate further, as it gave my quirk button a gentle nudge. 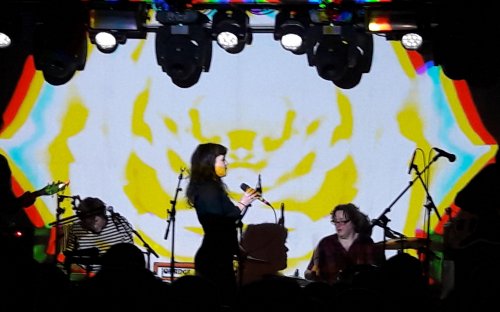 Band leader Jo Spratley has a beguiling stage presence, moving around like a marionette set free, messing up her hair and casting cryptic glances at the thronging melee in front of her. Unfortunately not long into the set her voice went south so she had to carefully pick and choose where it was to be used to best effect. There were a couple of very quiet numbers, musically as well as vocally, and this is where the “STFU” moment I referred to above occurred, as the by then very loud chatter from the bar area had turned into shouting. Bloody disrespectful, although the band didn’t seem to notice. 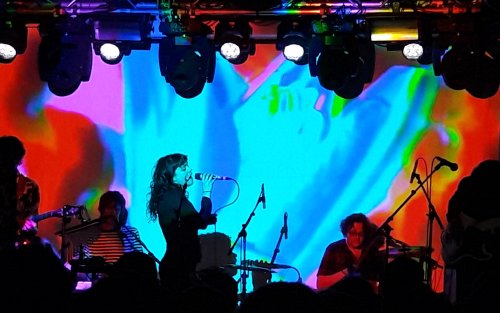 The last third or so of the set got more urgent, and the last two numbers, Klog and Cabinet, were fabulously angular but direct offerings that had the crowd jumping. Aye, not bad at all!

After a short break the Spratleys returned to the stage all aglow in white, to begin a short set of Cardiacs covers, and as the set progressed they were augmented by musicians from the other bands, plus guests, to form a many-tentacled monstrous psychedelic jellyfish in yer bath, that stung in the most pleasant of ways. 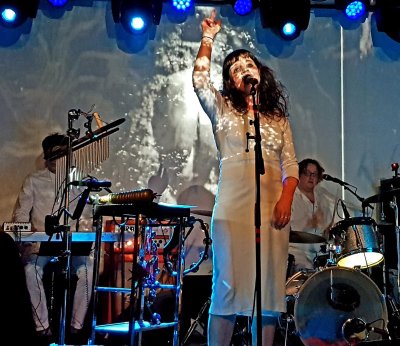 The climax of the set, nay, the climax of the year, was a magnificent and righteous arrangement of the greatest song ever written, the unsurpassable Dirty Boy, here rearranged to incorporate the Knifeworld horn section. Fronting this surging beast was Mike Vennart of Oceansize fame, who more than did vocal justice to this summation of everything that is good about popular music with a performance that almost turned Tim Smith’s finest moment into his own song… almost. Boy, has this guy got a set of lungs on him and a stage presence to match! Jon Poole, another famous ex-Cardiac also joined in with yet another guitar and some stirring rabblerousing. There were three ex-Cardiacs guitar manglers on stage by this point. It was bluddy horrid it was! 🙂

You know Dirty Boy, I take it? If you don’t, watch the above RIGHT NOW! The song climbs in accompaniment to Sisyphus on his never ending journey to the summit of… summat. Heck, whatever I drag from my mental Thesaurus is never going to get even slightly close to describing what a joyous experience this was, especially for a late-comer to the genius of Cardiacs’ oeuvre such as moi, who has never seen this song performed live before. The ending, a stretched and slowly shifting chord pattern anchored around the note G#, that sounded like one chord to me, but I’m told by someone who knows, lasted a good five minutes. It was a ramalamadingdong resonating with harmonics that could move mountains, allowing everyone not already on stage to return and take a bow, and it was one of those hairs on the back of the neck, lump in throat moments you won’t forget in a hurry if you were there. I would describe it as transcendental, or as Phil put it “this must be what a religious epiphany feels like”. And all in front of the venerable Dr. Tim Smith too!

A perfect ending to a very good year for gigs, and a great birthday prez for this old scrote. Ta muchly!

I was so carried away that in the aftermath, I forgot to visit the merch stall to see if they had any of the rather spiffing gig posters (see cover picture) for sale. Oh well, a minor blip, all in all!

We hung around for a bit of Steve Davis and Kavus’s DJ set, but I was happily knackered, somewhat dazed and slightly fried. I needed my bed. 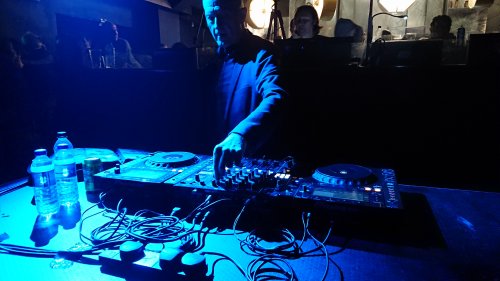 ZOFFF + Terry Bickers:
I did ask, but… “Haha, no titles, such is the nature of improvisation, well, ours anyway!” 🙂

Knifeworld:
I Can Teach You How To Lose A Fight
I Am Lost
Dear Lord, No Deal
Don’t Land On Me
High/Aflame
Vision Of The Bent Path /I Must Set Fire To Your Portrait
Feel The Sorcery
Destroy The World We Love
Me To The Future Of You

“The Monstrous Psychedelic Jellyfish”- Cardiacs covers set:
Song Of A Dead Pest
Arnald
To Go Off And Things
Flap Off You Beak
Dirty Boy

“The Monstrous Psychedelic Jellyfish”:
All or most of the above, resplendent in white, plus (A BIG PLUS):
Mike Vennart – Lead Voice (and some) on Dirty Boy
Jon Poole – Guitar & Rabblerousing on Dirty Boy