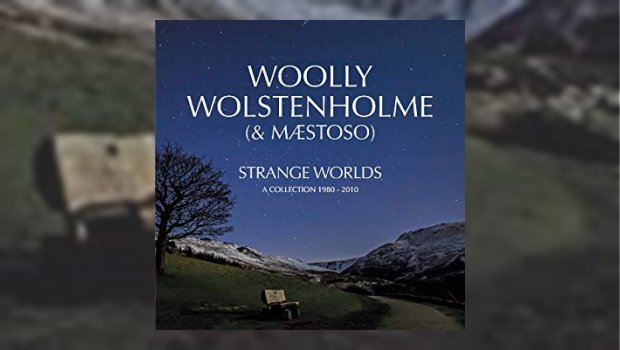 This 7-CD clamshell boxset consists of Stuart “Woolly” Wolstenholme’s career as a solo artist and with his band, Mæstoso. It contains five studio albums, one live album, and a bonus disc of unearthed material, outtakes, and demos.

I remember the first time I heard Mæstoso’s music, probably in 2011 when I bought the compilation Feed Your Head – Essential Progressive Rock: The Mind Expanding Sounds Of Esoteric Recordings. One of the featured tracks was Blood And Bones from Mæstoso’s third studio album, One Drop In A Dry World, originally released on Eclectic Discs (pre-Esoteric) in 2004. When I heard the track, I was hooked. It has crossovers of folkiness, Mellotron, an epic feel, and dramatic wonders from Woolly himself, going beyond the sounds of Barclay James Harvest.

This box set contains Woolly’s first solo album, Mæstoso, plus Black Box Recovered, One Drop in a Dry World, the live album Fiddling Meanly – Live At The Mean Fiddler, Grim, Caterwauling and The Unlost Works – Demos And Fragments. The centre-pieces here show Woolly’s love of symphonic structures and hint at what could have been if he’d stayed with Barclay James Harvest.

At the time of his departure from BJH Woolly was unhappy with the direction in which the band was moving, away from the symphonic roots that they were known for towards a more American West Coast sound. Tensions rose with the rest of the band and he left in 1979, before the release of the Eyes Of The Universe album, following his symphonic leanings by releasing Mæstoso as his first solo work.

From that album, Mæstoso: A Hymn In The Roof Of The World originated in 1974 around the sessions for Barclay James Harvest’s fifth studio album, Everyone Is Everybody Else. The song wasn’t used on the original album because it was deemed to be too different, but listening to the version on Woolly’s debut album, released in October 1980 on the Polydor label, it shines brightly.

From the alarming introduction of piano and guitar to the climatic drum work and then back to a mournful section, Woolly sings a beautiful melody describing the joys of peace and happiness, being alive after being caught in a deadly war, the heavens finally answering the call to stop the madness.

The ticking clock effects on Has To Be A Reason move left and right between the organ, drums, and guitars like a beam of light, marching forward in the style of the Audio-Visions-era Kansas thanks to the rising mid-section chorus with that late ’70s/early ’80s arena rock atmosphere. It then suddenly takes on a circus-like theme before an epic wave crashes onto the sands as the alarming introduction returns. Patriots has a church-like Hammond organ opening as Wolstenholme takes you to the Sahara desert with his keyboards, crunching chords finding signs of hope with an orchestral rising of the sun. Listening to this boxset now, it honours Woolly’s legacy and keeps his spirit alive. There are elements of AOR, symphonic, arena rock, progressive, and the cinematic; Woolly is like an actor who knows his part down to a tee.

The arrangements have some incredible moments, with aspects of Klaatu’s Hope, thanks to Steve Broomhead’s guitar structures and Woolly’s tip towards Bo Hansson’s improvisations. The Will to Fly is a nod to The Beatles with some gorgeous Mellotron, piano, and guitars soaring to the heavens with soothing double-tracked vocals, while The Sunday Bells is a gentle acoustic folk melody for the first two and a half minutes before turning it up a notch on the keyboards.

Sung in the style of Happy Old World from Barclay James Harvest’s Once Again, Deceivers All is Wolstenholme’s direct jab at the record labels. It shows Woolly’s passion for his music, wanting complete carte blanche for his art without some hot-shot industry executive telling him what to do.

Through a Storm starts with a massive explosion as a fanfare of trumpets from the keyboards makes you want to duck for cover as the eye of the hurricane is upon you. Broomhead’s guitar creates a sound that combines thunder and lightning, a folk structure giving Woolly the chance to look at nature’s beauty after drinking a nice sip of summer wine. There’s finger-picking and a 12-string acoustic rhythm before the eruptive sounds come at you from Broomhead and Kim Turner’s instrumental parts. Craig Fletcher and Broomhead share the melody, Woolly’s alarming organ becoming quite dangerous as the strength of the hurricane goes off the charts before, changing back to the fanfare intro with cowbell.

Eerie acoustic and keyboard riffs form a motif intro to The Iceman Cometh, changing to a heavier rocking sound and then again into a late ‘60s psychedelic twist as Location, Location, Location deals with not just the subjects of philosophy and astronomy, but what is happening right now with reality TV shows becoming everyone’s nightmare. It’s done in a hard-rock style with elements of Van der Graaf Generator and a Peter Hammill-esque lyrical structure on the subject of the next top model to become the “It” girl. Woolly shows humour by writing his own musical on Scene From A London Flat. Featuring Christmas bells and Peter Gunn rhythm, there are more unexpected twists and turns including singing in the style of “Weird Al” Yankovic’s Christmas At Ground Zero.

Woolly’s demos on the bonus disc, The Unlost Works, features some of the best moments, giving insights into the recording sessions through rough guide vocals and some tracks in demo form. Some of the rough drafts that Woolly created would later appear on John Lees’ Barclay James Harvest’s North. The Light At The End Of The World offers signs of hope during the aftermath of a post-apocalyptic landscape as sunlight appears in a grey sky amid mournful arrangements. Wagon features timpani, dooming bass riff, and snarling guitars out of the blue as a blistering fanfare for some heavy machinery coming into town, the noises themselves are epic and deafening as they bring in the big guns to raise some hell. Woolly returns to the Once Again era for A Funny Kind of Blue during the Grim sessions as Steve, Craig, and Kim return to a country sound, but in the style of Vanessa Simmons.

Caravan’s Geoffrey Richardson makes an appearance playing viola on Shoes from the Caterwauling album in a song that tugs at your heart. Woolly brings so much emotion to his songwriting with funereal drums from Kim and Steve’s brutal guitar work. But it’s the 11-minute Soldier of Fortune that heads into more cinematic areas, suggesting King Crimson’s Larks Tongues in Aspic era, bringing the Prog torch to life on a loop for a few minutes before changing gears as Broomhead and Turner go into uncharted universes between universes. The oboe comes in to give listeners a view of the aftermath of the battlefield. It’s very much a folk song for the soldiers. There are unexpected moments, but Woolly keeps a consistency through the various movements that are quite astonishing.

The box set contains a 20-page booklet containing liner notes by Keith and Monika Domone who run the international Barclay James Harvest fan club. It talks about the history of Woolly’s solo career and, of course, Mæstoso. There are parts of an archive interview with Woolly and also photos of the band, ticket stub for a show supporting Judie Tzuke, and a poster for a support slot with Saga.

While Woolly Wolstenholme is no longer with us, after taking his own life on 13th December 2010 to end his battle with mental illness, this box set makes sure that his legacy remains, keeping the spirit of his solo career and the wider history of Barclay James Harvest alive.