The last time Steven Wilson came to Houston was back with Porcupine Tree in 2010 when he played at the House of Blues on the tour for the band’s tenth and final album, The Incident. He previously played in 2005 at The Engine Room for the Deadwing tour and Meridan for Fear of a Blank Planet in 2007. I wasn’t there for those shows but when it was announced that he was coming back to the House of Blues this time I knew I had to go.

It’s five days before Christmas and Steven is bringing some early Christmas cheer promoting his fifth studio album, To The Bone, bringing visions of beauty, surrealism, emotion, and power to lift the Spirit of Texas. 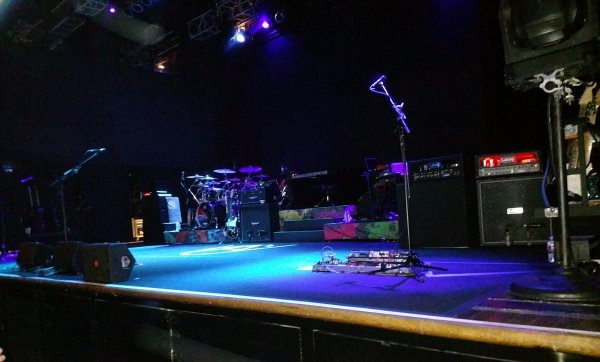 The lights go down and an announcement says, “Good evening and welcome to tonight’s concert. The musicians will shortly be arriving on stage. But before they do, we would ask you to view the following short film, designed to gauge what kind of response you may have to the performance. So please, sit back, relax, and absorb. Thank you and enjoy the show.”

Just like the introduction to the Home Invasion blu-ray, the Truth short film is a slide show with captions showing the daily routines of normal lives accompanied by 1940s style music. It features images of friends, domestic abuse, the birth of man, and the Church of Scientology as considered “Fiction”. Droning sounds comes out of nowhere as the captions frantically switch from image to image. As the film finishes the band members come onstage one by one. Nick Beggs, Adam Holzman, Craig Blundell, and Alex Hutchings move to their instruments to start the first act, but before they start playing Steven appears to a warm and welcoming reception.

They kick things off with Nowhere Now, the spotlight shining on Wilson as he begins to sings the lines, “Six feet underground, we move backwards now at the speed of sound, we are nowhere now.” From Blundell’s drumming, Holzman’s piano, and the blaring opening chords of Hutchings’ guitar, they go into overdrive before segueing into a dazzling and spectacular take of Pariah.

Featuring Ninet Tayeb’s breathtaking vocals via the screen behind the stage, sharing a duet with Wilson, he goes to the microphone after the song and says, “Good evening, Houston!” He apologised to the audience for the long delay in returning, but although long overdue this is an event that we will never, ever forget. The eerie Mellotron introduction from Holzman sets up the flickering lights before the band create a clashing, brutal force to give Alex some funk-like melodies before the odd time signatures kick in.

I love how Adam adds some Gentle Giant Free Hand-like improvisations as Hutchings’ echoing effects on his guitar sets up a Zappa grooves. And he really goes to town on them. Steven is very much like a conductor, giving the band members some directions on where he wants them to go to before singing the first notes of Home Invasion/Regret #9. The ascending melodies and lukewarm sections create spaced out voyages into infinite worlds where Steven takes us on a journey, following in the footsteps of Rod Serling’s classic TV series, The Twilight Zone. Holzman has complete free-rein as I watch how Steven gives him some ideas, throughout his Moog channeling the early ‘80s approach of Rush’s Moving Pictures.

This section was just jaw-dropping, the audience in awe of both Craig and Adam rolling down the highway and never stopping throughout Regret #9. The show is not only about Steven’s solo work and five Porcupine Tree songs are performed through the first and second acts of the show. He knows that the fans haven’t forgotten the roots he started with over 30 years ago. 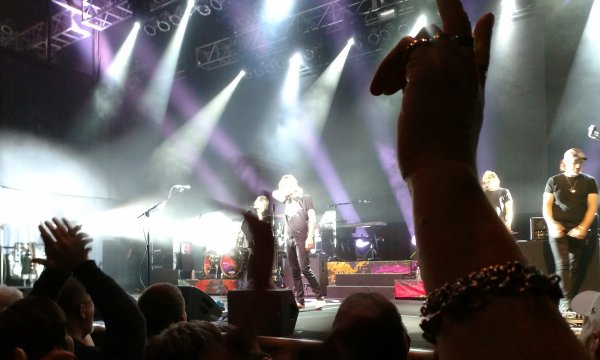 Don’t Hate Me from 1999’s Stupid Dream made me open my eyes to go back and re-listening to Porcupine Tree’s music to see what I was missing. The screen shows the City of London on a cold and wintery day, giving a calming atmosphere. Holzman is back in town as the screen changes, exteriors showing different locations in London. Steven himself creates early Floyd/Tangerine Dream sounds on his guitar, dark mysterious tunnels that go into dangerous places. The Creator Has a Mastertape is the turning point. The blaring notes give Craig and Nick the opportunity to go into Interstellar Overdrive once more. It’s a challenge for Blundell, keeping up the pace by following Steven to see where the band should go into an eruptive and explosive speed chase.

Nick Beggs’ Chapman Stick channels the styles of Geddy Lee, creating his own take on YYZ while the lights flash rapidly as Steven himself makes sure that the energy levels for the audience at the House of Blues are up to 100%.

The second set gets ever better. It starts off with No Twilight Within the Courts of the Sun, beginning with Craig’s drum work followed by Nick’s bass riff on a loop, Alex’s guitar, and Adam going into some Mike Ratledge’s psychedelic organ work. Craig is not just an incredible drummer, he really takes his work to a different level by carrying the torches for Billy Cobham, Terry Bozzio, and Neil Peart. When they start playing the introduction of that riff, the crowd know exactly what it is from the Insurgentes album. The band offers a gigantic cannon blast that hits at the exact moment the tracks offers a post-rocking punch. It goes quiet for a little bit before they return to the eruptive explosions once gain. Steven pours his heart out with a megaphone-like sound, speaking like a beat poet.

The snapping fingers and trip-hop sections to start Index were quite unexpected for me, Steven speaking the lyrics to the first sections of the song in the style of Allen Ginsberg rather than singing before the screen shows the mannequins, doll parts, and bug collections. Like something from Jonathan Demme’s 1991 classic The Silence of The Lambs, you can imagine Steven writing a score for the film as if going inside the mind of Buffalo Bill to see what torture he will come up with next to terrorise.

In 2017 Permanating drew a line in the sand for fans as to whether to accept Steven’s new direction or not. For me, I welcomed it because it shows Steven’s true admiration of really good pop music, not the modern pretentious horse crap of Justin Bieber, Iggy Azalea, Taylor Swift, and Kanye West. I can imagine that the song itself will become a live favourite for many years to come as Steven crossovers the styles of ABBA’s Mamma Mia and Talk Talk’s 1982 debut, The Party’s Over, but once he gets to Lazarus it becomes a sing-along for Houstonians, everything he did with Porcupine Tree coming full circle. 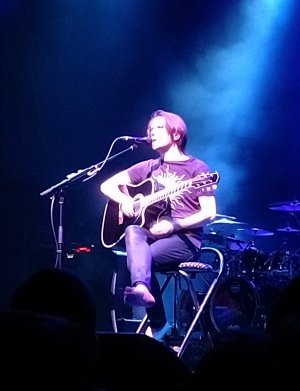 The band return for a three song encore performing an acoustic version of the title-track of his Blackfield project. It’s Steven on acoustic guitar with Holzman playing piano. It shows that he’s more than just the sound of Porcupine Tree, tipping his hat to friend and bandmate Aviv Geffen. And then he finishes off with two more songs, with nods to both Pearl Jam and Radiohead’s OK Computer with The Sound of Muzak and the eerie nightmarish beauty of The Raven That Refused to Sing.

The late great Robin Williams once said, “You’re only given a little spark of madness. And if you lose that, you’re nothing.” For Steven’s performance at the House of Blues, despite having the flu, he didn’t lose that spark in a sky that will always move sideways by going into the Lightbulb Sun. He didn’t miss a beat. I wouldn’t say I had the time of my life, but this was an experience and a journey that goes beyond the progressive genre and shows how far he has come.