Pagan Vibes in the Land of Champions.

Starting a short tour to promote their rather fine new platter Bottled Out Of Eden, the bright-eyed and bushy-tailed ur-rock psychedelic beastie that is Knifeworld chose Leicester’s cosy venue The Musician on a Monday night as the opening date. A brave move given the disappointingly low turnout a couple of years ago at the same venue on The Unravelling launch tour. Thankfully the crowd was big enough – just – to be called that this time out, and as ever the six boys and two gals in the band gave it their all.

The band that began as a solo project for then Cardiacs’ guitarist Kavus Torabi in the early years of the new millennium has slowly developed over the years and became a full band in 2009 to play the trippy debut album Buried Alone live. It has since evolved to become the tightly knit sixteen-legged psychedelic chamber rock monster that we now see before us on this warm early May evening in a city probably still partying after that most unlikely of sporting successes. You’ll know all about that if you’re a football follower, if not, I won’t bore you with it here. The title of this wibble is a clue!

Around nine fifteen pm the band arrive on the low stage, and three droning saxes entice us willing supplicants into the surreal Knifeworld, and on deeply down into the heady swirl of the opening track from the new album, the rebirth anthem that is High Aflame. Most of the new album is played, with a couple of tracks from previous album The Unravelling thrown in for good measure.

Kavus detects a “pagan vibe” in the air and after a wigged-out Vision Of The Bent Path invites us to make a fire sacrifice. Given the small size of the audience, reducing it further by immolation might not be the best of ideas methinks. We are then saved this unnatural raising of temperature by a burning version of I Must Set Fire To Your Portrait. Kavus is a natural frontman and carries off the between song banter with his usual infectious enthusiasm. At one point he calls over mostly hidden keyboard wizard Prof. Emmett Elvin to demonstrate his low tonsorial growl which Mr Elvin it seems cannot summon at will. “No, it’s gone” he says and glides back to his position behind the small but perfectly formed keyboard rig.

The audience seem to be mostly fans, and old men (me) are moving limbs in dangerous approximation of “dancing”. Do the Lysergic Skank, old boy, you never know when the next opportunity may present itself. The slower numbers give us a breather and darkly gorgeous The Deathless presages a call to remove “the wrong people” who are “in charge” by collective psychic power, or Foul Temple as it is otherwise known.

All too soon the main set is over, and as Kavus tells us, being a “rock audience”, we know “the protocol” will be observed. The dutiful encore is fleshed out by In A Foreign Way as the band want to play for one hour and twenty minutes, not a moment less. This choice is arrived at by The Musician version of The Clap-o-meter, Kavus giving us a choice of this one, The Wretched Fathoms and another I can’t recall, the one with the loudest cheer winning the day. It seems the more obscure tunes in the Knifeworld cutlery drawer are barely known by this audience – me included I hasten to add – and In A Foreign Way only won because it was the last choice and garnered the appropriate ironic cheer. Whatever, this tune from the 2012 EP Clairvoyant Fortnight was an odd beast that sounded like a collision of several time signatures that I considered must be a bitch to rehearse, but personable young bassist Charlie Cawood later nonchalantly told me “It’s mostly in 6/8 and we’ve been playing it for years so it’s a doddle” or similar. Musos, eh?

All in all a great night of adventurous music, played in a spirit of joy and lapped up by this small but appreciative crowd. If you can catch them on any of the other dates on this tour, do it, you won’t be disappointed. The dates are on the Facebook page. 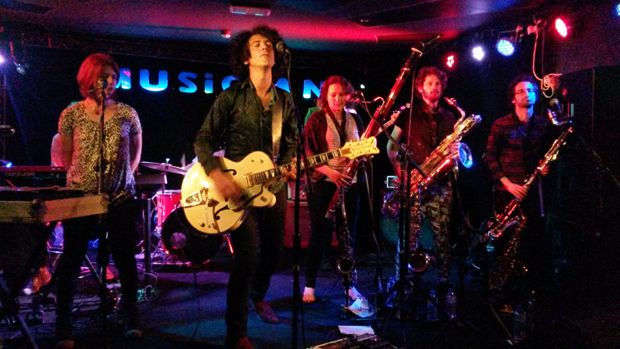 SET LIST
High Aflame
The Germ Inside
I Am Lost
I Can Teach You How To Lose A Fight
Vision Of The Bent Path
I Must Set Fire To Your Portrait
The Deathless
Foul Temple
Secret Worlds
A Dream About A Dream
Feel The Sorcery
Destroy The World We Love
~ Encore:
Send Him Seaworthy
In A Foreign Way
Me To The Future Of You