Mike Morton is usually the vocalist with London based Progressive rock band The Gift, but he also occasionally turns his hand to promoting ‘mini festivals’, such as Resonance and last year’s first Masquerade, at The Bedford in Balham. This year for Masquerade 2 he changed venues to The Boston Rooms and put together a really diverse range of bands to raise funds for the Macmillan Cancer Support Charity. The line up featured such luminaries as Norway’s marvellous Magic Pie, the mercurial talents of Pete Jones and the Tiger Moth Tales band and the London debut of Scotland’s magnificent Big Hogg. Amongst other bands, this line up ensured a good crowd gathered to enjoy the music and meet up with old friends, including some in eccentric masks and costumes. 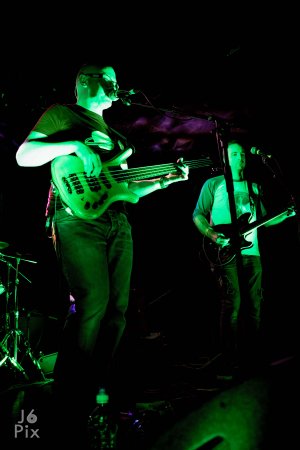 This event kicked off with this promising band from the town of my schooling, Reading – alas I missed the opening section of their set, which was a real pity as I witnessed a really interesting and entertaining set of quirky progressive rock from an excellent band, and wished I’d arrived earlier. They featured songs from their debut album Everything Beautiful in Time, including the hook filled and rather acerbic observation on bullying, Princess Strange. This is a talented band with flowing keyboards from John Murphy and some finely played but not flashy guitar from David Addis – the song was paramount for this band rather than displays of musical indulgence. Ben Hartley drove them on with precision on drums, as main vocalist, bassist and chief song writer Michael Whiteman led the band on through a strange musical world with beguiling lyrics that included The Milgram Experiment and the peculiar and exotic sounding Strandbeest from their new album, Gathering the Waters.

I was rather surprised to hear them cover Yes’s Long Distance Runaround (which they did well), but the high quality of their own fascinating material means that they don’t really need to do covers… and if they’re doing a Yes cover surely it should be Don’t Kill the (Manic) Whale!). The classic Yes cover also segued smoothly in to the finale of the catchy but driving rock of Open Your Eyes, filled with harmony vocals, Addis in particular featuring on rippling guitar (echoes of Supertramp in a more ‘Prog’ style?). This was a confident show from a very promising band, proving that Mike Oldfield (who went to my school) is not the only talented rock musician worth hearing from Reading! 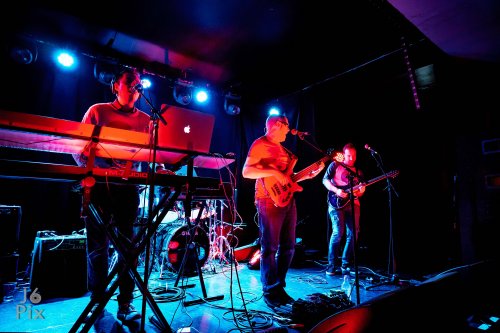 The unexpected absence of the band Preacher led to two artists stepping in helpfully to fill the spot in this charity event by doing short acoustic sets.

First up, The Tinderbox gave us a short acoustic interlude with Roger Marsh (whom legend has it is the ‘Famous Roger Marsh from the telly’ on Heir Hunters) on vocals, accompanied by a particularly good guitarist. There were signs of nerves initially but Tinderbox warmed up with an entertaining set. They may have lacked a little spark, and it would be interesting to see the full band in flow, but with short notice they sang some rather touching songs. 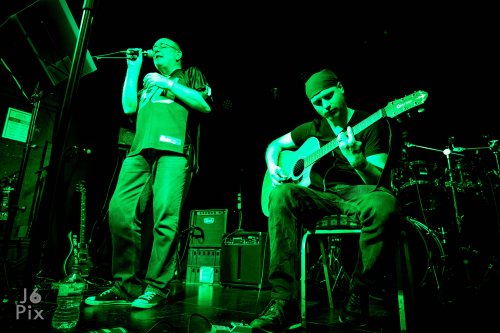 An idiosyncratic Intro by T.P.A.’s very own Tony Colvill seemed apt for the eccentricity of Tom Slatter who announced himself as the ‘Supply Teacher’ replacement for Preacher.

Tom’s music and lyrics are frankly weird, especially the apparently autobiographical Some of the The Creatures… – I do have a confession that I don’t get really ‘get’ Tom Slatter, but to be fair this set drew me in. I have seen him solo before and felt that live he would benefit from a band setting if possible. Gareth Cole on guitar helps fill out the sound and does more justice to Slatter’s album material, despite the fact that they had to perform without a soundcheck and little time to set up. Self Made Man stands out and particularly shows Gareth Cole’s skill on guitar. Tom Slatter also displays a surprisingly soulful voice which was not something I had felt previously… and they deservedly received a very positive response. 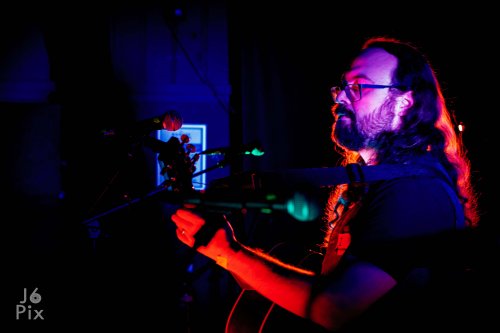 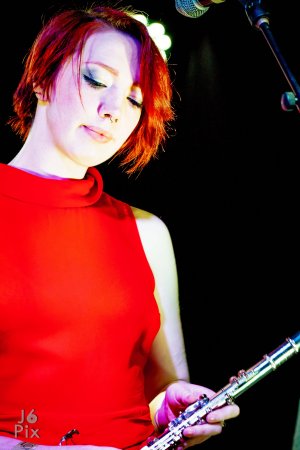 One question needs to be asked – Why the hell haven’t Big Hogg played in London before?

This exciting, entertaining and fun show was a very impressive London debut for this Scottish band who kick off with a rocking Dog People featuring Justin Lumsden, outstanding on guitar and distinctive rock vocals sounding like gravel and smoke. A Stone The Crows cover of Ode to John Law followed as this ‘hard to define’ non-standard rock band, with flute and trombone, really rocked out (apparently the trumpeter was missing!).

This energetic and humorous band then introduced Vegan Mother’s Day as “nothing to do with vegans or mothers…”, featuring a trombone solo – not something one sees every day! Their dry humour continued as they announce themselves as “From Scotland, a small district north of London”, but they were clearly pleased by the very positive reaction they were getting from the crowd in the Boston Rooms. The gentle Rabbit Plateau showed a more pastoral side with a languid flute and guitar. In contrast the more rollicking My Banana featured the unforgettable refrain “Fuck off and give me Peace!”, with which striking singer/flautist Sophie Sexon encouraged the crowd to sing along, which they did heartily. This remarkable band then achieved the almost impossible, such was their charisma and infectious groove – they got a crowd that was largely a ‘Prog’ audience (not known for their terpsichorean skills or sense of rhythm) to actually dance… as horrific as that may sound it was great fun. 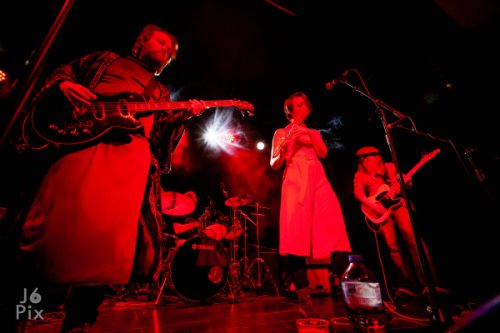 Nick Gaughan was the drum powerhouse with Tom Davis nailing down the beat on bass… in a rather nice dress. There was nothing ordinary about this excellent band, especially the powerful vocals, excellent flute playing and stage magnetism of Sophie Sexon. Turn to Prayer about “everything you want but can’t have” – which seems timely for Christmas – stepped up the intensity before the vibrant and suitably dark Devil’s Egg finished the set with a rather sinister flourish. If they turn up in your neck of the woods, suspend your preconceptions and just go along – you won’t regret it. 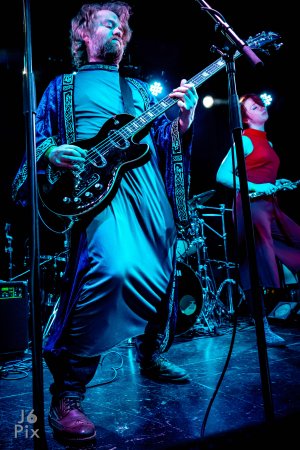 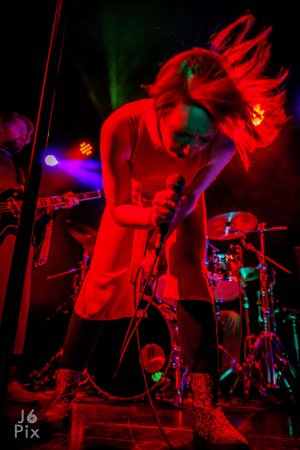 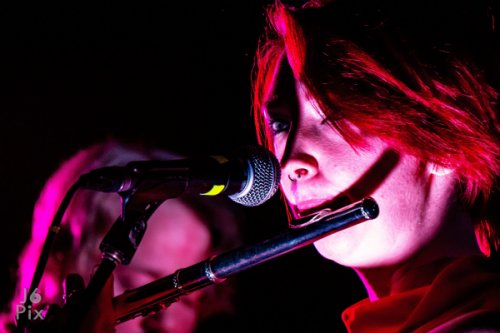 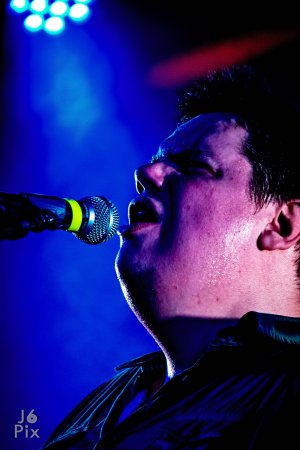 What more needs to be said about this wonderful band with the incredible Peter Jones leading it with such skill and artistry?

Another superb gig from Tiger Moth Tales, full of great musicianship, fabulous singing and fine songs… and some humour. The show opens with the dramatic instrumental Overture before moving into the emotional masterpiece that is Don’t let Go, Feels Alright, which never ceases to touch me emotionally or enchant me musically.

The evening featured three songs from the excellent new album The Depths of Winter, including the folk tinged musical adventure romp about Robin Hood, The Ballad of Longshanks John (with maybe a nod to Clannad in there?). This is followed by another song from the new album which is already proving very popular, the Genesis influenced Tears of Frigga, which goes down very well with the packed crowd.

Bass player Mick Wilson shows his versatility by playing the clarinet for the touching new song Migration. In contrast, the humour of the band seeps through as the intro/tune up for the lunacy that is The Merry Vicar includes riffs from Smoke on the Water and even Steptoe and Son!!

The finale piece, Tigers in the Butter is as outstanding and exciting as usual, with Paul Comerie in cracking form on drums. Andy Wilson’s great fluid guitar solo at the end is very much appreciated by Peter Jones, who remarked that Andy plays this song better than he does! A Visit to Chigwick is the expected and much anticipated encore with much of the crowd singing along with every word to this nostalgic but strangely emotional modern day classic, taken to the hearts of listeners. The star of the show, of course, is Peter Jones, equally at home on voice, guitar or keyboards… and sometimes simultaneously. A special gig by a special band. 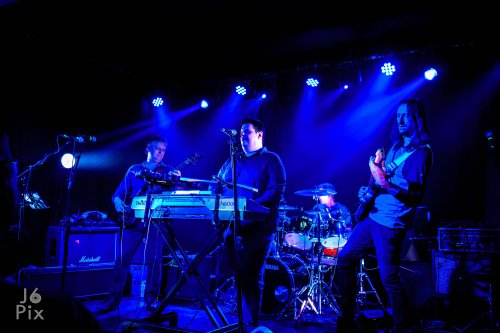 SETLIST
Overture
Don’t Let Go, Feels Alright
The Ballad of Longshanks John
The Tears of Frigga
Migration
The Merry Vicar
Tigers in the Butter
~ Encore:
A Visit to Chigwick 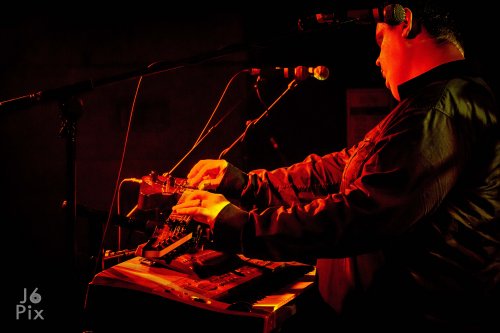 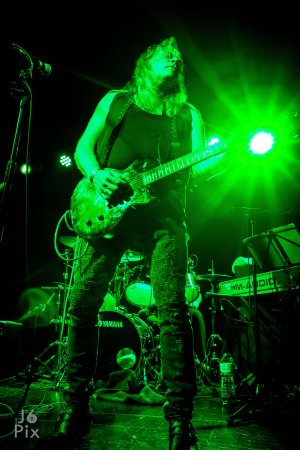 Every Christmas Norway gives Britain a Christmas Tree for Trafalgar Square – this year they also sent us this wonderful heavy melodic prog band. This great event was given a rather spectacular finale by the fantastic harmonies and full on rocking Prog of this outstanding Norwegian band.

Magic Pie launch into Introversion from their recent excellent King for a Day album. Older song Change was rather beset with technical problems, causing a slight break in proceedings with which the crowd was sympathetic – the perils of borrowed equipment it seems. However, they jumped straight back into it as if there had not been a break with great professionalism.

Tears Gone Dry was emotional but maybe a little sombre and low key for such an event. Erling Henanger featured on keyboards for the complex and dark Slightly Mad, along with Kim Stenberg’s scintillating guitar work all night. Power and fluidity characterise this classy, slick band who overcome the persistent technical gremlins with coolness and poise. Final song A King for a Day is a monster 30 minute melodic and rocking tour de force, chock full of catchy hooks, heroic refrains and killer harmonies. A sort of ‘Prog Queen’ at times! The musicianship is fabulous and this finale rocked like a fat one at times and then calmed with more sensitivity. Charismatic Front man Eirikur Hauksson displayed class vocals with added guitar… and a nice line in humour. This was a spectacular end to a great day. 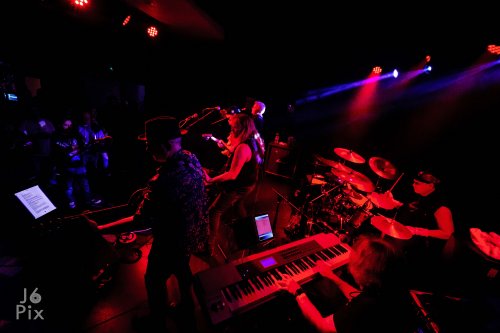 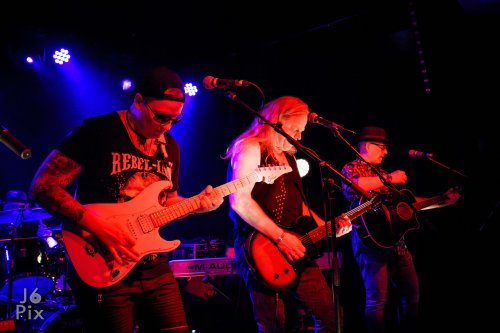 The bands also contributed items for an auction, led by eccentrically attired compere Tony Colvill, and along with the ticket money a substantial sum was raised for Macmillan Cancer Support – well done, organiser Mike Morton!