Tolpuddle, Dorset. Home, or nearly, of the Dorset Knob, a local delight served with cream and jam. How appropriate for an afternoon gig in the presence of Peter (Tiger Moth Tales) Jones. Following TMT’s impromptu appearance in the Rotunda prior to the Friday night gig for Big Big Train back in August of 2015, the birth of an idea was hatched in February 2017 to do something bigger and better. Mad Pierre and his sidekicks, plotted, planned and with the timely intervention of Chris Topham found a venue. Which brings us eventually to Islington. Consulting the dying oracle we locate the venue, but hark, this one is not on the street of the Puddles of Tol… 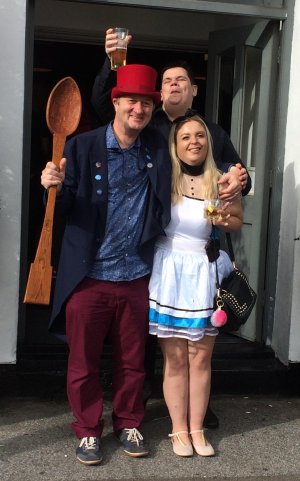 One hour to go and the cavalcade move on, entering the The Islington Café and Bar (having spent 40 minutes perched on a wall like a lost pigeon) I am greeted by Alice, okay it’s Mrs Jones but I have come to expect this sort of thing, and decline to inquire further as to the contents of her wardrobe. Passengers, for it is they, slowly cram in to the pub. I am seized by a gentleman of the Italian persuasion, the first of many hugs throughout the day.

The stage is set, our compere, Leo Trimming, starts the formalities; introductions, who travelled farthest, and insults for Yorkshire. Yes, a well-balanced piece of work, the red top hat retreating to be replaced by the Man in Black, a blonde wig, and silly hat. We should never have booked him on a weekend. Who’s Alice?

Tiger Moth Tales are frightfully English, both intelligent and eccentric. Leo has declared him a national treasure and already men with shovels are preparing for the internment. Words, tentative notes and let the music begin as the “Scat Cat in the Hat” opens with Tigers in the Butter, a tale of dangers in the corner of the kitchen (filmed as A Fridge Too Far), subtly mashed with a little of Yes’ Awaken, his 100 plus audience are certainly now awake. 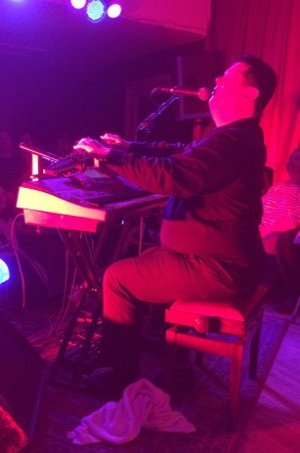 Peter Jones is an excellent representation of the term ‘multi-instrumentalist’. Mad-cap, gentleman, wit, raconteur, and English eccentric, whether in song or introductory banter he holds his audience rapt. Even within the small, low-ceilinged environment of The Islington, the sardines that are the audience are treated to excellent sound along with wonderful entertainment, and all this without those hangers on known as The Band (who are, all joking aside, excellent as either the TMT Band or Red Bazar). From the nostalgic insanity of Tigers…, we move into the first tear-jerker of the afternoon, Don’t Let Go, Feels Alright. Not only beautiful of voice, but the wordsmith that is he portrays feelings that most have felt at some time or other.

More TMT material as we move through Storytellers to A Kids Tale, a retelling of the Three Billy Goats Gruff, complete with troll, silly voices and audience participation. A Kids Tale was ambitious, but worked, much of this being down to the unique way in which The Mothster holds his audience.

Then news of his new album and the first of two tracks unheard before; The Tears of Frigga, a lovely piece that leaves me anticipating the escape of the album sometime before Christmas. (I find it hard to believe they are released, the energy within just screams out that Tiger Moth Tales will not be caged.) 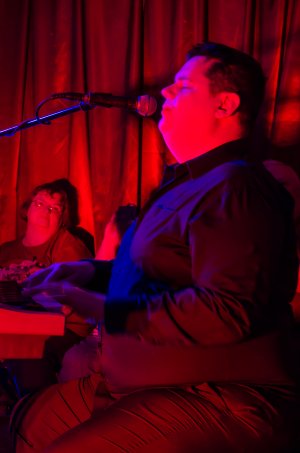 The Musical Box opens the Genesis/Peter Gabriel singalong, and with hindsight I wonder what Tony Banks (present at the Big Big Train concert later on) would have made of these interpretations, and for that matter, carrier of the Genesis flame, Steve Hackett? Many of the guitar chops employed by Peter are pure Steve Hackett. Pete sings beautifully, the audience harmonises, through Fountain of Salmacis, and then on to Peter Gabriel’s Family Snapshot, a favourite of mine, and even without that PG edge and suppressed malice, a wonderful rendition. From Peter’s own catalogue of tunes and collaborations comes Red Bazar’s City And The Stars. More RB is apparently on its way, hurrah!!

A little more TMT as The Quest For Beauty from Storytellers (still a load in the garage awaiting purchase!) opens feels like part two of the set today, and then Migration, the tale of a migrating/hibernating stoat, a unique creature given that they do neither; hey ho, artistic interpretation abounds! Sensible stuff concluded with, slip deep into the mind of Jones boy; insanity on the edge of genius, or is it the other way? To be honest, who cares? Brilliant. The Merry Vicar, with those previously mentioned Hackett chops, is nicely seasoned, served with relish and a selection of seasonal vegetables (no not the man in the red topper!). Audience participation again, either your pet hate or showtime love, who cannot be carried by the enthusiasm and warmth that fills the room.

More nostalgia with the Tiger Moth’s reflection on childhood and those halcyon days we remember with love and affection that probably were not quite like that, A Visit to Chigwick, when we knew and loved Windy Miller. Time does indeed fly by, driver of a train or not.

Our time here, in this venue in Islington, is coming to an end, and since our gathering is essentially to witness Big Big Train at Cadogan Hall just off Sloane Square, what better way to bring things to a conclusion than with a medley of that bands tunes, in this case Victorian Brickwork and Last Train. They lose nothing in power between the original and the Tiger Moth Tales version, the strength of good song writing. 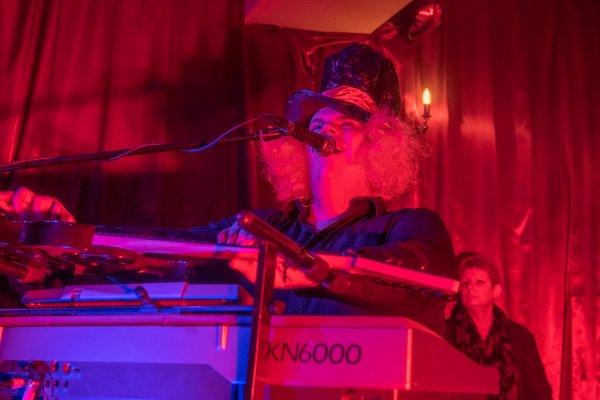 It is over far too soon. More Fool Me, an oft forgotten Genesis gem, closes our afternoon of fun, laughter, numerous hugs (many perpetrated by the artist known as Paolo); friendships are made, some old, some new, some cemented, and backs are quite suitably patted. Much thanks should be accorded to Mr Trimming (yes, that one!) and Peter Jones for the conception, to Chris Topham, finder of venue, and Chris Jones who ran the merchandising and created the memorabilia for a wonderful event as part of a fantastic weekend. The gig was recorded by Cliff ‘Progzilla’ Pearson and will be broadcast on Saturday 14th October, minus The Tears of Frigga from the forthcoming album The Depths of Winter, due out in November.

[With many thanks to Mike Strauss, Bronwen Trimming, Michael Heller and Leo Trimming for the images,
all used with permission.]