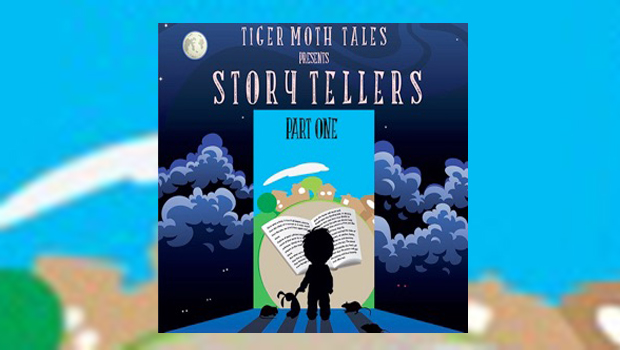 Tiger Moth Tales is a solo project from multi-instrumentalist Peter Jones. Many of you will already be familiar with the 2014, Tiger Moth Tales debut album, Cocoon, a charming and often whimsical album. Take a look at the review by m’collegue, Tony Colvill. You should check this review out because it is a great assessment and check the album out because it is a fantastic showcase for Peter’s talents and a great listen to boot.

When I heard that Tiger Moth Tales was to bring out another album my reaction was surprise! Either the dust really hasn’t settled on the first release or my perception of time is warped. Time is flying by bloody quickly these days. I jumped at the chance to review it.

It turns out that this time warp is the result of Peter rising to the RPM challenge of creating an album in 28 days.

When musical projects start off with such an accomplished debut the band sets the bar high for their next release. The phrase “difficult second album” exists for a reason. Few bands get the opportunity to have gathered two full albums of material together before ever having seen a studio. But this is a different ball-game altogether. This album stands or falls, not because it might be the difficult second album, but because it was the 28 day album. There was no hidden advantage. This is not one of those times when a band seems to pull a great second album out of their hat from nowhere. For example, The Stranglers had been playing the songs from Rattus Norvegicus and No More Heroes live for years prior to being signed. Even if Tiger Moth Tales was a hardened live act with a plethora of material, pre-crystallized into working songs, Peter had nothing but his talent and a strong musical pedigree to fall back on. And 28 days to do it in.

Even though a strong Genesis influence jumped out at me, Story Tellers is more multifaceted. There is strong homage to Genesis but with an additional, distinctly post-Hackett-era Genesis vibe. There are times when I find some bands tread the fragile line between pastiche and plagiarism. Luckily, Story Tellers falls short of this because it begins to give ground to a new vibe. This takes the form of what I would describe as prominent elements of musical theatre. These make an appearance from the start in the overture and despite giving way to a very Genesis-like sections, the musical theatre theme reoccurs and defines large chunks of this album.

There are some properly beautiful elements to this album. In its latter half I thought that Beauty Falls breaks entirely away from the rock genre. The melancholic orchestration toward the end is simply moving. Beauty Sleeps contains some lush, thematic classical guitar bleeding into full orchestral accompaniment. In these parts Peter reveals his talents as a composer and I think I found them the most enjoyable sections to be found on the album. I think he also revealed a side that I want to hear a lot more of.

The title track, Story Tellers, blends together Genesis style guitars, Tony Banks style piano. The synthesised woodwind in the bridge just made me think of Burning Rope from …And Then There Were Three.

Try as I might, I couldn’t enjoy The Kid’s Tale. Peter recognises this and calls it the Marmite track. This track is pure pantomime and I suspect that kids or less cynical adults who have retained a childlike element at their core would love it. But the voice characterizations and the comedy elements, coupled with the Sonic The Hedgehog style musical passages are just not for me. Then it dawned on me: I’m looking at this all wrong! I thought, perhaps unkindly, that the album was aimed at people who want the void left by Genesis to be filled. My preconceptions coloured my view of the album with the wrong colour palette. This album is actually targeting a different audience. The clue to how wrong I was is in the first album, Cocoon. The whimsy and reference to lost childhood might be the key that unlocks the album for some, that makes me get the point. Stories full of every aspect of storytelling. That probably explains why I felt uncomfortable with some parts of this album. I’m not sentimental enough and that is my failing, not Peter’s.

Despite there being a definite recurring reference to Sleeping Beauty, The Piper might well be positioned as the Magnum Opus of the album, being a song of movements and parts and by far the longest track. It continues the pantomime but adds a distinct heaviness and darkness that is more Danny Elfman than Tony Banks.

So… is this “the difficult second album” and has Tiger Moth Tales cracked it? I don’t think I’m the best judge of this. The songs on Story Tellers, Part One are replete with interesting chord progressions and instrumentation. The performances are excellent and Peter’s distinctive vocal performances single him out as someone to continue to watch out for. There is a real love for the music he has created. It shines out of Peter’s work. In 28 days Peter has marshalled his admirable talents into an accomplished hybrid of prog, pantomime and musical theatre. As that’s what he seems to be aiming for then he’s doing a splendid job. Perhaps what this album deserves is to be adopted by a talented animated film maker to bring the stories to life? That would be splendid!

If he can do this in such an amazingly short time then imagine what he can accomplish in a year! In some ways I sense we might be seeing more of the real Peter in this album. I for one would relish the prospect because in my head I genuinely want Tiger Moth Tales to lose its association and break free of the retro Genesis references and give us some more new sounds as well as new songs.