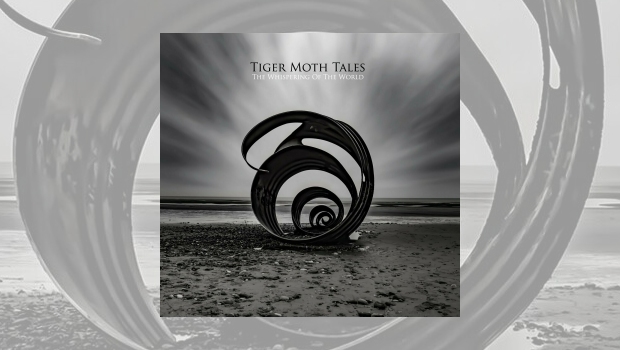 What a conundrum Peter Jones is, seemingly capable of turning his hand to a variety of musical styles with intuitive ease and aplomb, whether as a solo artist or with Red Bazar, or the legendary Camel, amongst other collaborations. The dreaded ‘C’ word has cast a shadow over this year, so let’s instead concentrate on the remarkable surge in musical creativity in this sad, benighted year. The multi-talented Tiger Moth Tales man has already regaled us with the uplifting and yet eccentric Still Alive EP and now follows it up with the remarkable and completely different The Whispering of the World.

If anyone is expecting guitar pyrotechnics or keyboard wizardry, or some of the usual ‘Mad Mothster’ eccentric humour then they may be surprised. The Whispering of the World is the most emotional and personal album of Peter Jones’ career, showing a completely different side to his character and talent. Playing only a grand piano, Peter is backed, gorgeously and sensitively, by a string quartet, arranged by himself and Ian Lawson. The quality of Peter’s singing has never been in doubt, but this album really showcases his vocal ability to convey emotions in such a touching and intuitive manner. Nowhere is this more evident than on the final piece, Lost to the Years. The impact of these songs is often rooted in Peter’s personal feelings and memories. Consequently, the songs resonate with a real sense of truth from the heart. Lost to the Years is based on the loss of Peter’s Grandmother in early 2019, which hit him harder than he expected. This led him to ponder mortality and writing this song was a therapeutic way to express his feelings and give himself some reassurance. Peter has previously expressed, such as the achingly beautiful Don’t Let Go, Feels Alright’ from his 2014 debut album Cocoon, his belief that we live on in the memories of those we leave behind, handed down through the generations. In Lost to the Years, Peter wonders what he would leave behind and how he would honour the memories of those he has himself lost. He concludes hopefully that somehow we are all still out there ‘in the continuum’, singing:

“So be your best and make your mark, And try to be the light among the dark
And if you lose the Faith in what you do, Remember all those, the ones who felt like you”

Touchingly, if you listen carefully towards the end you can briefly hear the memorable opening notes of the ‘Feels Alright’ section of Don’t Let Go, Feels Alright – a piece which means a lot to people, and is now being used during funerals. I have no embarrassment in saying that each time I hear this new song I feel a tear or two may come on. Peter states about Lost to the Years, “I’m not religious, but there’s something spiritual about this song”… and ain’t that the truth.

Sweeter than Wine earlier in the album explores similar elegiac territory to Lost to the Years, with particularly lovely cellos from Sandy Bartai and Sarah Berger. Peter has revealed that he wrote this song on the day he heard the shocking news of the untimely death of an old school friend in 2019. He wanted to remember all the happy times he spent with her and their friends, and to celebrate her life, ensuring she lives on in those she left behind.

The Whispering of the World album expresses a range of emotions and is not always quite as intense as the elegiac Lost to the Years – there’s only so much melancholic reflection one can take, even when it is portrayed so excellently. The opening song, Taking the Dawn, is a joyous gateway into the album with strings beautifully mimicking the sound of birdsong, celebrating the “natural wonder of the Dawn Chorus”, as Peter puts it. He has explained that since childhood he took delight in hearing the different birds of the early morn, and even now the dawn chorus lifts his spirit and revives him. Peter Jones seems to have a fascination with birds on this album, as a bird also features in one of the highlights on the album, the delightful Blackbird. This is not a cover of Paul McCartney’s Beatles classic (although the opening vocal refrain seems to have a very slight hint of that piece) but it may come to be regarded as one of Tiger Moth Tales’ highlights in years to come. Peter’s voice is at his most mellifluous as he sings about walking home very late one night from the pub and just stopping “to hear a solitary Blackbird singing in the streets before the dawn”. The violins of David Adams and Lowri Porter imaginatively evoke the birdsong in this gem of a song… and yeah, Peter’s right – sometimes we just need to stop and notice the beauty around us.

The violins of Porter and Adams, along with the cellos of Bartai and Berger with Nancy Johnson on viola, are the real stars of the only instrumental of the album, A Town by the Sea. Peter has shared that this piece is inspired by regular holidays over the years in Teignmouth, Devon with his wife Kimberley, and if you close your eyes you can just hear the walks in the woods with their beloved dog, Barley, and nights out singing and drinking with friends. There is a more sorrowful interlude which represents the sadness of scattering Barley’s ashes in the hotel grounds, showing the Tiger Moth Tales skill in intertwining joy and sadness in the space of a few bars… in more senses than one of that word.

There is a famous poem written in 1957 by Stevie Smith called Not Waving, But Drowning, about a man whose desperate waves from the sea for help are interpreted as someone just waving a greeting.  Peter Jones appears to have borrowed that idea for his own Waving, Drowning, which features more frantic strings and shows his own flowing piano skills. This composition is based on his personal experience of depression, which he has touched on previously in other songs, such as Almost Over from the 2016 Red Bazar album Tales from the Bookcase. Waving, Drowning thankfully concludes optimistically:

“Someone somehow made me see, Was it you or was it me?
Now new life is coming, I’m waving not drowning”

Being a Tiger Moth Tales album, characteristically there are a couple of more expansive or impressionistic pieces in which Peter stretches his imagination and strikingly uses the grand piano and strings to conjure up evocative musical images. The title track is an eerie and often stark flight of the mind based on a childhood memory of a family holiday in Minorca. Peter is probably best placed to describe the peculiar but evocative The Whispering of the World:

“On the beach we could hear a strange sound, almost like breathing… we traced it to a rock with a hole in it. The breeze was blowing in and out. I went on a tangent with the idea, imagining I was there alone, and that the breeze through the rock was the Whispering of the World. As if the Earth was talking to me, like I was hearing something from the ancient past…’

It’s certainly unusual and ethereal, akin to a film soundtrack at times. The lengthier Quiet Night is another atmospheric journey into Peter’s imagination, again based on a childhood memory of a holiday. There is something magical about the half-remembered recollections of distant memories of our early years, and Peter uses those memories as the stepping off point for a fantasy journey in which the “World turns upside down”. Tiger Moth Tales have explored children’s fantasies previously on a few songs and most notably on the two Story Tellers albums so Peter knows how to tap into those feelings of wonder and young innocence. On Quiet Night, darkness and terror are conquered by a heroic figure coming to the rescue of the main protagonist, to bring them home. In the finale this feeling of salvation is simply but beautifully evoked by a soul-touching piano melody and an uplifting vocal which truly lifts the heart like the Sun breaking through storm clouds.

The Whispering of the World is a latest remarkable chapter in the fascinating career of Peter Jones, displaying his versatility and intuitive skill to paint his musical pictures on grand piano with the skilful embellishment of strings. This album was actually recorded before the arrival of the pandemic, but its release was delayed. Strangely, it may be very timely that at the end of the year when positive news is emerging to shine through the gloom that this hopeful and soulful album is also released… and don’t we all need rescuing sometimes?