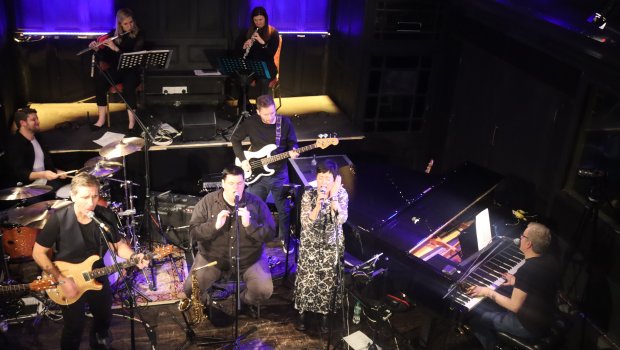 Sometimes things happen which overshadow everything and remind us all what is important and truly of value. Those of us who gathered for the recent annual acoustic evening by Magenta at the lovely Acapela venue near Cardiff were given a sad reminder of that reality when news of the tragic death of Big Big Train vocalist David Longdon emerged shortly before the concert. Magenta and Peter Jones have all worked with David in the past, and considered him a friend. Indeed, Longdon made a guest appearance at Magenta’s twentieth anniversary gig near Newbury in 2019, performing a great vocal version of Steve Hackett’s Spectral Mornings with the band. Sadly, and inevitably, David’s passing cast a shadow over the whole event, but commendably, Magenta and Peter Jones played with such poise and professionalism to give the audience a wonderful night of lovely music.

Magenta’s Acapela gig has virtually become a Christmas tradition for fans who gather from far and wide in the convivial and intimate setting to see a more stripped-down show by the band, who also contribute special solo performances. Magenta also invite a special guest to join them for these shows each year, and this year it was Peter Jones of Tiger Moth Tales and Camel.

Peter Jones started the evening alone at the grand piano with lovely renditions of his solo songs Taking the Dawn and Blackbird, from his gorgeous 2020 album The Whispering of the World. Pete also treated the Acapela to a delightful new song, The Goddess and the Green Man, which bodes well for his next album in 2022. Typically, he finished with an enjoyable Genesis medley of Dancing with the Moonlit Knight segueing into Carpet Crawlers, which had the crowd singing along nostalgically. 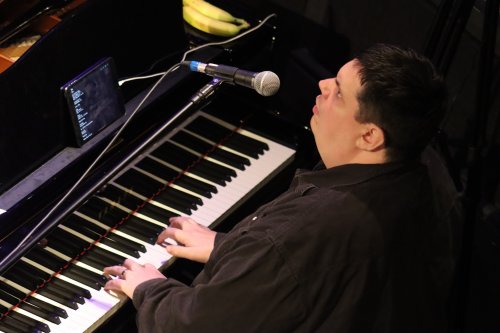 However, the undoubted highlight of Pete’s set was his incredibly touching and emotional cover of the Big Big Train classic Victorian Brickwork. How he managed to sing this song so beautifully in those circumstances was truly outstanding. You could have heard a pin drop, such was the emotional spell cast by this performance. I have since heard that for some in the audience this was actually the way they first heard about this sad news. It was an unforgettable and truly moving moment. Pete Jones broke all our hearts that night, but at the same time music that beautiful and heartfelt also began the healing process. The progressive rock community is relatively small and close knit, and such was David Longdon’s friendly and approachable manner with fans that it really did feel like we had all lost a friend. 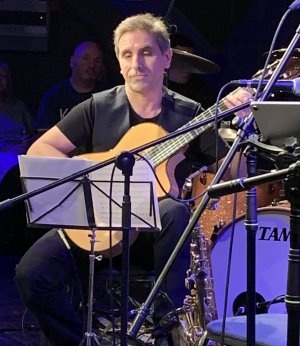 The first half of this Acapela show has always been an opportunity for Magenta band members to show their own individual talents, and they still manage to do that in intuitive and fine style under difficult circumstances.

After such emotion it was probably apt for Chris Fry to sooth us all gently with beguiling and delicately played instrumental work. He debuted a new piece called Mynedd Maen, played in two parts, about the hills around his home – it must be a lovely place. His characteristically skilled acoustic guitar was augmented to enchanting effect by Katie Axelsen on flute and Liz Harwood on oboe.

Christina Booth opened her set, accompanied by both Chris Fry and Rob Reed on guitars, with a passionate version of her solo song Hate You, from her album Broken Lives and Bleeding Hearts, revealing her original title was Hanging by a Thread. 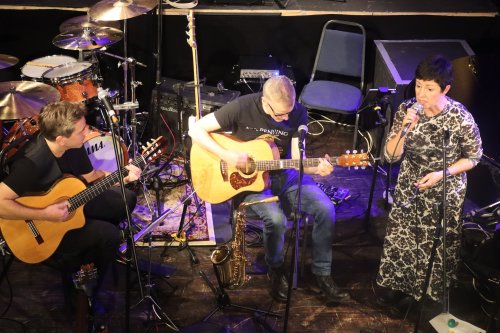 On a night of poignancy and remembering lost souls, Christina shared that her touching new song Barstool Prophet was written for a friend who sadly took their own life. The atmosphere changed with a more groove-laden Free My Soul, featuring Magenta’s Dan Nelson on smooth bass. What followed was the rather surprising set of Magenta drummer Jonathan ‘Jiffy’ Griffiths, stepping up to the grand piano to show truly impressive skills on the piano. He skilfully accompanies Christina with a gorgeous version of the Fleetwood Mac classic Songbird. In a night of emotive highlights this is another heart-melting moment. 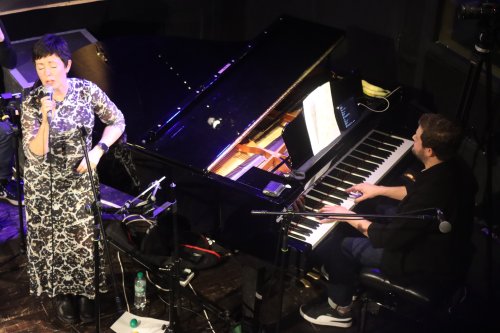 Cyan were regrettably unable to debut as a band at October’s Summer’s End Festival due to Covid, so it was pleasing that with the majority of Cyan present at this gig (except guitarist Luke Machin) they chose to play a couple of their songs from one of the best melodic progressive rock albums of 2021, For King and Country. The album’s origins go right back to Rob Reed’s schooldays, but it has now been spectacularly re-imagined. The title track is full-on unashamed ‘Prog’. Pete Jones is in fine voice and Rob Reed and the band paint out a gorgeous musical canvas filled with poetry and drama, telling a story of men going to war. In contrast, I Defy the Sun is more like a quality ’80s pop/rock love song with Jones intoning suavely “I Tug on a different heart string”, later playing a smooth sax. They finish off this entertaining set with a vibrant cover of The Best of You by Foo Fighters. This short but fine set certainly whets the appetite for a full show by Cyan, hopefully in the not-too-distant future. 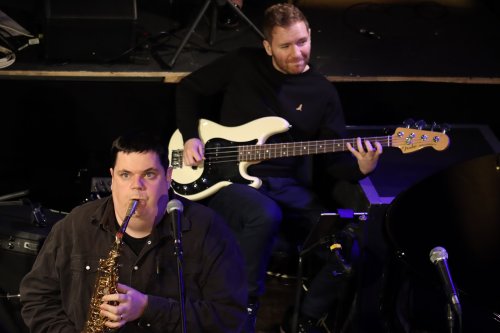 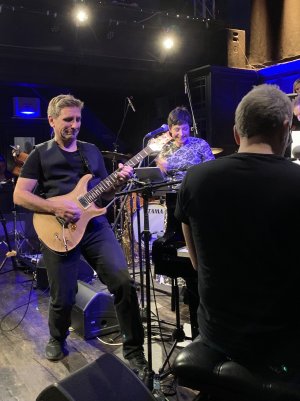 Whilst there is sadness in the air, Magenta manage to make us smile with the quality of their music, delivered with dashes of humour, typified by their impromptu short jam of Favourite Things from The Sound of Music, whilst one band member (who shall remain nameless) dashes off for a ‘comfort break’ even before the set has commenced! Magenta are a brilliant live band, and as far as I am concerned two absolute ‘musts’ in their sets have to be Gluttony and The Lizard King, and I am very pleased to say they bookended this gig with these two wonderful songs. Chris Fry sparkled on electric guitar for the clearly very much Yes-inspired Gluttony. Indeed, the whole band perform this thrilling song with great aplomb. Pearl, the sad tribute to Janis Joplin, perfectly showcases Christina Booth’s pure but impassioned vocals and Chris Fry shows his versatility with a bluesy guitar solo. The evening is yet again tinged with sadness for the next song, the emotional and lovely Too Many Voices, from their new EP, Songs from the Big Room. This song was written for a fan called Andy Goodall who sadly passed away. In his will he left some money to help the band make music, so they used it to go to Peter Gabriel’s Real World studios with Peter Jones and recorded the new EP. The band dedicate Too Many Voices to Andy and anyone who has suffered loss, which clearly resonated this evening. Lines such as “This is not a sad refrain, I know we’ll meet again” were soothing thoughts. They later played another song from the EP, Because, which was more upbeat and featured Pete Jones on sax. 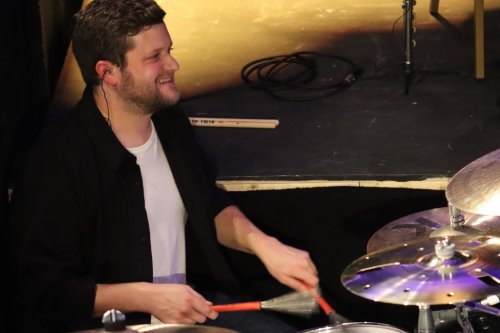 Magenta featured a trio of songs from the Home album, starting with the dramatic Demons, a real tour de force for the band with Rob Reed outstanding on keyboards, interchanging so well with Chris Fry’s guitar. Jiffy Griffiths and Dan Nelson drive this dramatic piece onwards, but are also equally adept and fluent when playing the more subtle songs. The beautiful Morning Sunlight literally shimmers. The great Moving On closes the Home section, and Christina excels in this emotive song. Unfortunately, the set had to be cut by a couple of songs, although it was understandable on such a night that time flew quicker than planned. The band quickly launched into a great version of The Warning, going right back to their 2001 debut album Revolutions, which the crowd loved. 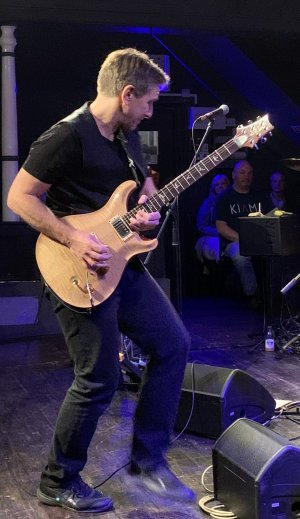 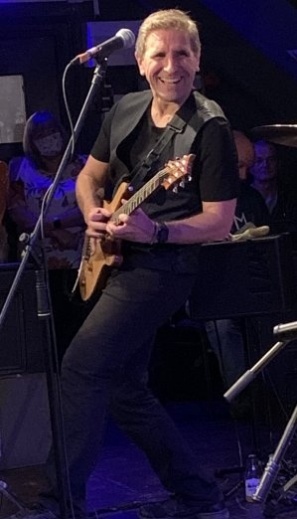 Magenta often surprise their annual Acapela audience and this year they began their encore with a fun take on the classic Logical Song by Supertramp – boy, do I love that song, and so did the crowd. It’s a brave thing, covering a classic, but Magenta do it with such class. They ended the evening on an upbeat note with the audience joyfully clapping along with the wonderful The Lizard King. Christina Booth signed off the evening aptly, saying “Celebrate Life” – she was so right. On a night that was shadowed with tragedy, the beauty and healing nature of music shone out.

Well done Magenta and Pete Jones – it was not easy but you rose above the sadness and celebrated the memory of David and Andy, and anyone we have lost, with beautiful, entertaining and moving music. Thanks. 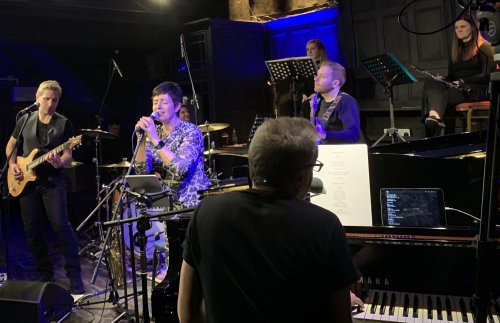 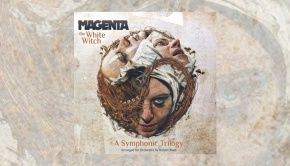