On a fine late Spring evening, a familiar band of fans gathered in the idyllic West Berkshire countryside to celebrate the 20th anniversary of one of the best progressive rock bands of the 21st Century – the majestic and multi-talented Magenta. This was a special event with a unique atmosphere and adventurous multi-media show enhanced with the mercurial talents of Peter Jones, of Tiger Moth Tales and Camel fame, and a special appearance from David Longdon of Big Big Train for a truly magical encore.

This was an evening filled with memorable moments. For instance, my heart swelled in the glorious conclusion to the first half performance of the 2006 album Home, in the stirring song Journey’s End, a wonderful showcase for the array of talent on the stage, commencing with Christina Booth’s touching and heartfelt vocals, Chris Fry’s soaring guitar lines and Rob Reed’s imperious keyboards driving on the whole piece, embellished beautifully by the woodwind of Karla Powell and Katie Axelsen. The standing ovation at the end of that flowing, lyrical rendition of the Home album was instantaneous and rapturous – it bodes very well for the planned imminent re-release of a remastered and reimagined edition. (I confess to previously not being so keen on that album… until this gig when its quality and emotion shone through for me. Sometimes it takes even the keenest fan time to ‘get’ some things!) 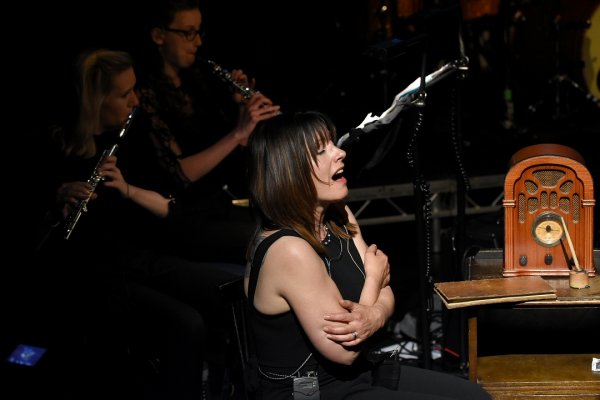 Home certainly showed the different sides of Magenta: the diaphanous vocals of Christina sparkling wonderfully on Towers of Hope, with the sad images of the World Trade Centre in the background, in contrast to the heaviness of Demons with Chris Fry confidently swaggering along the front of stage with crunching heavy bluesy guitar chords in front of Peter Pashen’s memorable CGI images. Another highlight of the Home set was Moving On, which was brought to life with great visuals, effective sound effects and Simon Brittlebank on tubular bells and other percussion. However, the real highlight of this song, and one of the highlights of the whole show, was an extended saxophone solo from the multi-talented Peter Jones which almost brought the house down.

Magenta are past masters of live performances, but on this occasion they chose to perform with a fascinating range of props, striking backdrop images and actors to illustrate the action. Booth donned a leather jacket and carried two suitcases to the sound of traffic for the gentle Morning Sunlight, embellished with some lovely subtle bass from Dan Nelson. The whole show was punctuated and enhanced with a range of sound effects from speakers around the whole theatre – this was not a usual Magenta show, we were really amongst the action.

After the break the show moved to an even higher level as Magenta continued to turn the pages of their 20-year long songbook with a throbbing short version of the sci-fi infused Trojan from their most recent album, We are Legend. Classic album Seven had already been represented at the start of the whole show with one of their greatest songs, the Yes-styled Gluttony. Chameleon is an album which has strangely been underrepresented in the Magenta live canon but tonight its quality was exemplified by an impassioned rendition of Red… even if there was a rather comical interlude just before the song when the band had to improvise with My Favourite Things as Christina Booth kept them waiting rather longer than expected – Magenta have always performed with some humour and a glint in their eye which endears them to their fans. However, after the emotion-drenched and heartbreaking vocal performance Booth puts on for the Janis Joplin inspired Pearl, Booth could have kept us waiting all night and we’d have forgiven her! 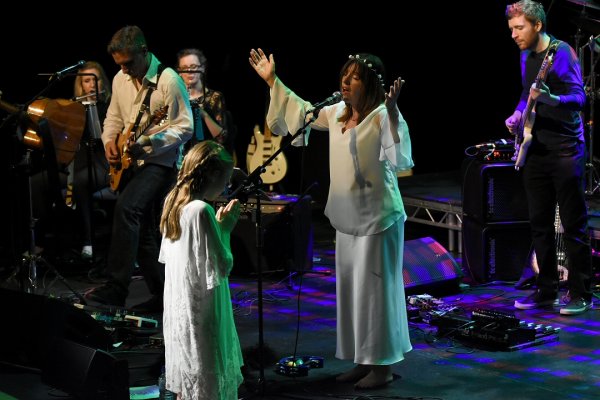 The second half of the show is where the theatrics and drama really take off. The stage is set with Christina Booth sat in a chair by an old phonogram with a book whilst a young First World War soldier walks nervously across the front of stage to sit in his trench emplacement, to be joined by another ‘Tommy’, nervously checking his rifle… and the band launch into the rarely played Ballad of Samuel Layne from 2008’s Metamorphosis. This simple but effective staging adds pathos and power to Booth’s vocal of loss, and the band play a stirring version of this dramatic piece, aided by Peter Jones on sax and penny whistle. It’s a touching performance which underlines the power of the story in this song. The drama continues in the finale to the main show as a ‘Witch Finder’ comes on screen speaking ominously of his mission to seek out witches, Christina returning to the stage dressed in white for the epic The White Witch from 1999 debut album Revolutions… it just had to be White Witch! An innocent young acolyte in white joins the stage in contrast to the mainly black-clad band, and Magenta pull off a scintillating version of this dark piece with Fry’s stratospheric guitar solo playing over Andy Coleman’s sinister ‘Witch Finder’ speech on screen. ‘Jiffy’ Griffiths’ stellar drumming drives this epic on with his usual assured combination of power and subtlety… and a nifty trick of hurling his sticks high and catching them just in time for the final flourish! The song finishes with two dark sinister Wraith and Death figures taking away the White Witch. The whole venue erupts fervently after such an evocative performance, musically and visually.

It would normally be hard to top that sort of finale but Magenta have kept a special treat for the encore as they are joined by Peter Jones again and special guest David Longdon. Steve Hackett himself appears on screen for a brief ‘Happy Birthday to Magenta’ message and then they launch into the lovely vocal version of the classic Spectral Mornings with Longdon and Booth duetting in gorgeous synchronicity – possibly two of the best vocalists in modern progressive rock, and what a treat it is for the enraptured crowd. Peter Jones peels off a classic Hackett-esque guitar solo (much to his delight as a massive Hackett fan!) and this remarkable show is nearly over. However, just to underline the special connection between band and their passionate fans Magenta finish with audience participation clapping in the brilliant Lizard King with images of Jim Morrison adorning the stage. What more could any Magenta fan have wanted – songs from every single album in their 20-year career played spectacularly well with skill and emotion by a tremendously talented set of artists. 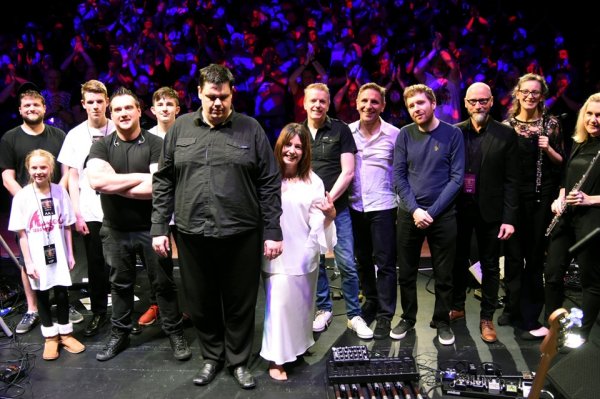 I’ve said this before in a review but it holds true more than ever on this night – In scientific terms ‘Magenta’ is considered an ‘extra special colour’ as strangely it is not actually found in the visible spectrum of light. Instead, it is physiologically and psychologically perceived as the mixture of red and violet/blue light, with the absence of green… in other words, it is such a weird and wonderful ‘colour’ our brains more or less have to make it up, filling in the gaps! Similarly, Magenta are an extra special rock band who dazzle their audience with bewildering instrumental and delicate vocal skill, painting beautiful, intricate colours and images in sound that are beyond the scope of many other artists.

This was a Magenta no-one has really seen before, with a dazzling all-round musical and visual performance of the highest quality. It was a very ambitious performance designed to really embellish the drama implicit in their music and lyrics, filled out with additional performers of the highest calibre, and it was an inspirational and joyful success.

Happy Birthday Magenta – here’s to the next 20 years… and on behalf of your many fans – Thank You to the band and all those that work hard behind the scenes to help make it all happen.

[No live photos were permitted by audience members until the final encore – ‘Official’ photos kindly provided by Chris Walkden on behalf of Magenta, used with many thanks from TPA.]