As I enjoyed a pre-gig pint in the handily placed Argyll Arms, I pondered the likelihood that this venture would turn out to be worthwhile. I mean, as a long-standing Zappa junky, there was never any real doubt that I’d have to go, but it was a slightly worrisome prospect all the same.

In the first place, the very idea of raising your hero from the dead by way of hologramatic voodoo seemed wrong somehow. Is this not diluting the ideal of live music? Can it be justified in terms of artistic integrity, or is this simply a money-spinning scam by the Zappa Family Trust? Let’s be honest here, the ZFT has never shrunk from milking the archive, and it sure doesn’t try too hard to make it affordable to the die-hard fan in my experience. And then there’s the whole family feud which still prevents Dweezil from being involved in this venture in any way. Clearly, the disputes rage on, which is rather sad.

However, one only has to look at the musicians involved in this show, and you immediately have to be impressed. All ex-Zappa band members, and all outstanding virtuoso players in their own right. And with the masterful Mike Keneally as musical director, all indications suggest that I should at the very least have well-founded hope for a good show. So I resolve to find my seat and try to be open-minded and enjoy it.

Whilst I wait for the Zappa-holics to take their seats, the music being played over the PA is spot on, a selection of FZ doo-wop classics from across the catalogue, a nice touch. The stage looks weird. As the musicians assemble, the band is crammed into the edges of the stage left and right, and there’s a big gap in the middle. As the opening song, Cosmic Debris starts, the hologram Frank appears in the yawning gulf between the band members. The heart skips a beat as you take in the fact that it really looks like him, albeit he seems slightly smaller than he should be, but when we get to the guitar solo, obviously lifted from a FZ live performance, he seems to grow in stature. All in my mind I know, but I have to admit I’m loving this already, despite my concerns.

Two things soon become clear. Firstly, this band have rehearsed their socks off, and can really play their hearts out. Mike is directing, so no real surprise. Second, the hologram is going to be used only sparingly. Seems best to be honest, and subsequent numbers replace the hologram Frank with a cartoon line drawn Frank. Now I know that sounds a bit daft, but in actual fact it works brilliantly, and Montana’s hilarious lyrics come alive in the visuals, which are a pure joy to watch. In your face, wacky and funny; Frank would have approved I feel. Trouble Comin’ Every Day brings further visual thrills to accompany the music, this time with American newspapers recounting the late ’60s riots and school shootings which sparked Zappa to write the lyrics, and then there he is, the man himself in one of the newspaper photos come to life playing the solo, like the ‘living’ newspaper photos in Harry Potter! 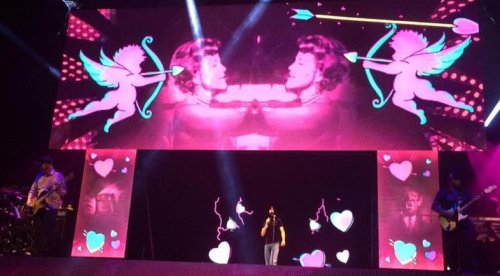 Now much as I admire the visual extravaganza, one of my favourite segments relied on no visuals at all, just the band playing on their own, and with Keneally taking the guitar solos in his own style. Anyone familiar with Mike’s solo work, or his Beer for Dolphins repertoire, will know already that he is a consummate guitarist, clearly influenced by his former bandleader, but no copyist, and the last two selections from the first set evidence this. It is also refreshing to hear them play the first real surprise of the night, reproducing The Evil Prince from the Thing Fish box set, and one of the best songs from that somewhat flawed masterpiece. It is easily the most complex piece so far, and the band absolutely nail it. Scott Thunes and Joe Travers are super-tight rhythmically, and Ed Mann and Robert Martin contribute the percussion and keyboard parts flawlessly, and what a joy to see the great Ray White on rhythm guitar and those silky vocals. He shines on the last song of the set, the zany Zomby Woof. The intermission provides a much-needed opportunity to catch one’s breath and take in what we have just experienced, and that is the crux of the show, it is an EXPERIENCE.

The second set begins with an unreleased piece which was ‘found’. Seems incredible really that, given the massive back catalogue and avalanche of posthumous releases, there are still nuggets to be found which to most of us were previously unheard. A hologram Frank conducts this piece, and it sounds wonderful. We continue with the relatively throwaway Why Does It Hurt When I Pee?, and a surprisingly slightly raggedy Peaches En Regalia, but we are soon back on track with Stink Foot, and then another piece which Keneally introduces as an instrumental called Farther O’Blivion which again never got used in its original form, instead cut up and parts used in various well-known songs such as Be-Bop Tango, but Mike and the band present it as originally written, and it’s another tour de force giving the musicians a chance to stretch out a bit, rather like the way the Mothers would do during King Kong. Ed Mann stars with his exhilarating xylophone parts, and Robert Martin dazzles, but again Keneally steals it with his amazing guitar and keyboard playing, often simultaneously. To finish then we have some more predictable songs, such as Dangerous Kitchen which works brilliantly with more visual fireworks, Dinah-Moe Humm (which this reviewer doesn’t care if he never hears again!), and City of Tiny Lites with Ray White to the fore on vocal gymnastics. Dirty Love closes the set with the return of the hologram and a fiery and furious solo from the master.

Encore time, and things threaten to unravel as Ahmet, who is the driving force behind the project, comes out on stage and tells us it’s going to be his birthday, but not until midnight, so his sister Diva wheels out a cake a couple of hours early. Then the band launch into one of Ahmed’s supposed favourites, Dead Girls of London. I seriously doubt whether it’s anyone else’s favourite, but he attempts to sing it and we look on. He tries to get the crowd to get up and dance, but there are few takers. Thankfully, sanity is restored as Ahmet is ushered off and we are treated to Cheepnis and Camarillo Brillo, two genuine classics played peerlessly, the latter with a final slice of the hologram Zappa before he disappears in a puff of smoke. 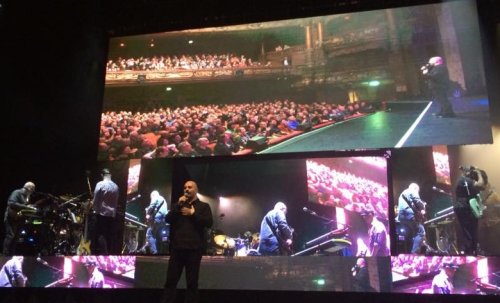 So there you have it. Overall, I was won over by the incredible visuals, an exemplary band performance, and great attention to detail. It was pretty much a technical triumph, and mostly respectful to the late great composer. If they were to repeat this exercise, and the same performers and creative team were involved, I’d be there like a shot. I will however definitely be attending at least one of Dweezil’s U.K. shows later in the year, and that is another proposition entirely.

Photos by Andrew Ryan, used with his kind permission.