St. Pancras Old Church sits in an island of arboreal consecrated ground, sitting there as if a visitor from another time, surrounded as it is by the hubbub of modern living. To one side is the railway line out of St. Pancras, to the other a warren of blocks of flats, and Midland Road, leading down to Euston Road, one of the capital’s busiest thoroughfares.

The church, which originates some 1,700 years ago, was derelict by the mid-19th Century and was then substantially rebuilt to cater for the growing local population. The building work included a new tower, the construction of which led to the precarious state of the building as it is today. In the mid-1860s, a young Thomas Hardy, then an architect’s assistant, was in charge of the excavation of part of the graveyard in order to accommodate the then new-fangled railway line. The peculiar yet touching arrangement of old gravestones from the original graveyard site around an ash tree, now referred to as “The Hardy Tree” harkens to a bygone age. 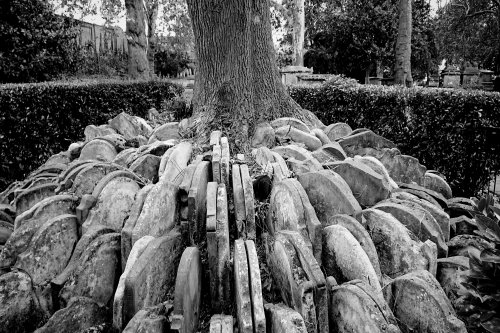 The Thomas Hardy connection ties in neatly with tonight’s headliners, who have a penchant for setting poets’ words to their entrancing music, Thomas Hardy being one, on Call To Me, played tonight. Bea Hankey introduced the song with a relating of the tale of Hardy’s connection to the church. 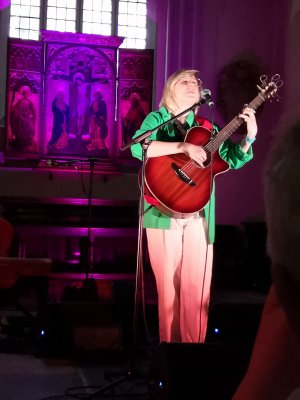 Before all that though, allow me to introduce you to Samantha Whates, whose intimate folk ballads opened tonight’s entertainment and kept the attention of the full house of 120 throughout. My companion Phil W. felt a connection to the intimate style of early Joni Mitchell in her “pre-jazz” years, and he’s not wrong.

The often introspective and lightly and knowingly humorous outlook of some of her songs is highlighted by the song Guilty, which was inspired by her having broken an ankle, and when introducing it Samantha said with a smile, something along the lines of “You have to take your inspiration where you can get it”. Apparently, she was recovering from the injury at the time she last played in this venue, when she was on crutches. Her songs are brimming with humanity and are a good restful place to visit in this hectic world. Although she has been performing for some years now, Samantha is a new name to me, and if you have a liking for intimate observations on life with a twinkle in their eye. then you will no doubt enjoy her music. Samantha has a new album out on 1st June, check out her Bandcamp page.

The performance area, in front of the altar space, was worryingly caressed by the largest subsidence cracks in a wall I have ever seen in a building, caused by the aforementioned Victorian over-enthusiasm in the reconstruction department. As Phil L. said, if they ever put on a band with a full drum kit, the place would probably fall down! No danger of that tonight, for Firefly Burning’s percussion consisted of an occasionally used bass drum, and a similarly sparingly used snare drum on a stand. 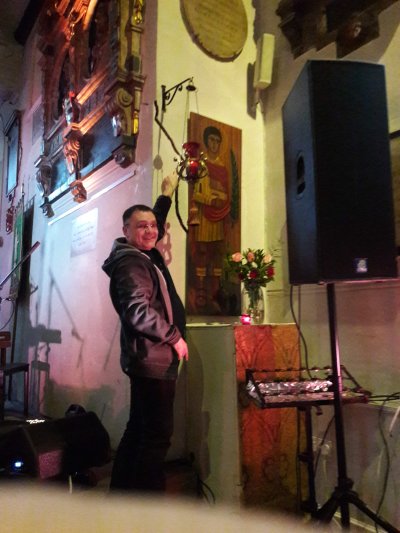 All but two of the songs in the main set were taken from Firefly Burning’s new album Breathe Shallow, released on 31st May, and as the set progressed I found it beguilingly hypnotic, with the interplay between the instrumentation and Bea’s expressive voice a delight to behold. Another highlight was the occasional use of 5-part male harmonies behind the lead voice, adding a glorious depth to the tunes. And mention must be made of John Barber’s gendér barung, an Indonesian gamelan instrument that bears a superficial resemblance to a xylophone, and which apparently has a sustain of over 40 seconds, even more within the acoustics of a church. Suffice to say the sounds it made added an ethereal element to the songs it was used in.

Take Me There was introduced as, “This is the closest we get to disco”, and the insistent rhythm on the bass drum made it certainly the most upbeat song of the evening. It has to be said that the band occupy a space very much their own. There are folk elements, wound up with pop and jazz, and chamber music in the mix. I have made this comparison before in an earlier album review, and it remains true – if you like the otherworldly and indefinable space of North Sea Radio Orchestra, especially their I A Moon album, you will dig this too. 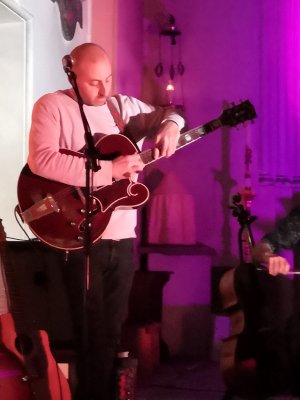 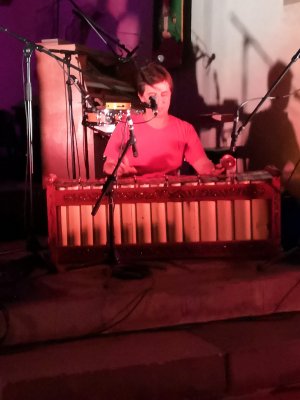 The main set closed with the soaring folk-chamber-pop triumph that is Beloved from the rather good previous album Skeleton Hill, bringing to close an economic but perfectly formed set that got the ovation it deserved. All in all, a thoroughly enjoyable evening’s entertainment in a historically intriguing venue. 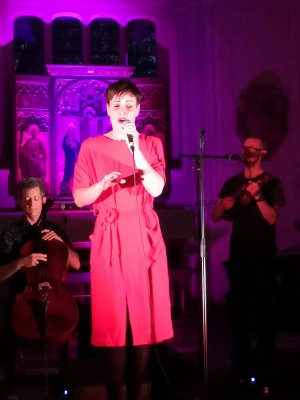 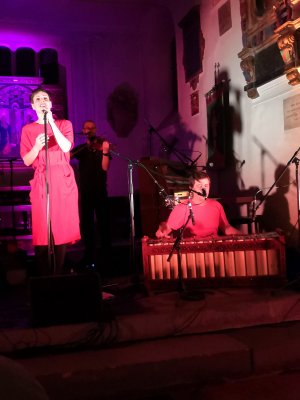