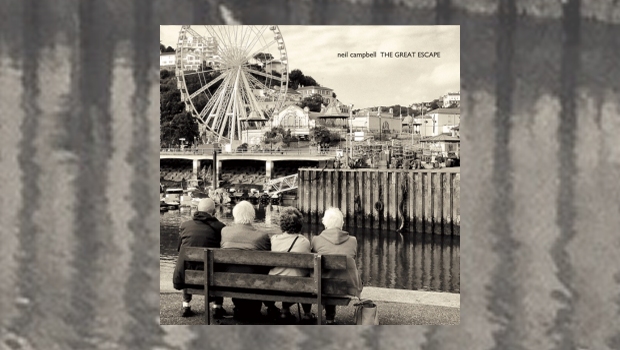 A musical tribute to the 1944 mass POW escape from Stalag Luft III, immortalised in the 1963 film? Maybe not. Maybe a little ‘closer to home’ as mankind gradually escapes the grip and re-emerges from the pathogenic war waged over the past couple of years. Or perhaps the escape is broader in scope, with a desire to seek diversion and consolation from the realities of the pandemic and once again socialise. I’m drawn to the album cover here, which depicts the simple pleasure of four ‘elderly’ people gazing across the habour towards a fairground ferris wheel in the distance.

Ironically, Neil Campbell’s previous trilogy of conceptual albums, which started in 2018, touched on how mankind might re-focus following some kind of large man-made catastrophe or natural disaster. Well here we are in 2021 and although we are not out of the woods yet, there is a growing air of cautious anticipation, and Neil’s The Great Escape features twelve bright and breezy tunes which, to these ears, are full of hopeful expectancy.

Recorded during lockdown, and as I listen through the album now I sense a need to escape the confines of the ‘home’ environment and visit far flung regions of the planet – Rio, Hawaii, Spain, or further afield as the album’s opener Symzonia would take us. Jonathan Seymour’s Symzonia: A Voyage of Discovery, written in 1820, chronicles the endeavours of Captain Adam Seaborn’s journey to the centre of the Earth. Neil’s musical vision is a delightful, melodic and multi-layered composition to get the journey underway.

As might be expected, Incident in Rio is full of Latin flavours, delivered with rhythmical panache, lightly flavoured percussion, but with an unexpected sombre twist created by the strings. Despite its title my mind stayed with warmer climes and gentle waves lapping against a sun-drenched shoreline during Solar Monarch, so I’m likely many a light year away from Neil’s vision, but the gentle flowing rhythm of Solar Monarch brought back memories of Fleetwood Mac’s Albatross. Wonderful tunes… both!

With more than twenty-plus independent releases under his wing, I was delighted that this latest offering from Neil sees him signed to a record label, Liverpool-based Klee Music. Well deserved recognition and the first steps to a well-earned new era. And The Great Escape is a fine place to start with twelve tunes, the majority of which clock in at around two-and-a-half to three-and-a-half minutes, offering brief snapshots of this multi-faceted musician, whilst capturing the essence of Neil Campbell.

For those unfamiliar, Neil manages to infuse ambient, classical, contemporary, folk, jazz and progressive music into an accessible and creative artform. All of which is evident across the album, whether it be in the self-explanatory Jazz Hands or more adroitly as in Another Estuary, where we have graceful strings depicting a slowly meandering river countered by his rippling classical guitar. Or the beguiling Passport to Magonia which glides effortlessly across the airwaves, befitting the ancient mythical inhabitants of Magonia, who would use airborne ships, hidden in the clouds, as cover for their raids on the farmers’ crops. The track itself is the longest on the album and benefits greatly from its extended duration. A true flight of fancy.


If Masquerade has piqued your interest then you will find eleven equally engaging tracks on The Great Escape. Once again, Neil’s long collaboration with producer/engineer Jon Lawton guarantees a warm and sympathetic production, allowing the numerous instrumental layers, clarity and definition.

The Great Escape will be released digitally, and for vinyl buffs a limited edition will also be available on 17th December. To mark the release, Neil, along with special guests Úna Quinn and After The Flood, will be launching the album at Liverpool’s Prohibition Studios on Friday 10th December 2021, a week prior to the official release date.