Four acts, over three and a half hours of progressive sounds proudly presented by Bad Elephant Music. Their signed acts jh, We Are Kin (performing an acoustic set with new singer Emma) and Tom Slatter with The Gift headlining to re-launch their first album, Awake & Dreaming. A small selection of TPA cognoscenti had gathered; myself, Mr Trimming and Mr Lively shared a few beers and nice meal, and later the entertainment courtesy of the above acts.

David Elliott, Bad Elephant mastermind and progressive music supremo, announced the acts, assisted on one occasion by the larger than life Matt Stevens (of The Fierce & The Dead). Opening proceedings jh (Jon Hunt), thirty minutes of one man and his guitar, sidestepping the request for his eighteen minute opus about a cup of tea, or something like that. A series of interesting songs including one about London Road, and two parts of Making Tea is Freedom – I think it was the sugar and stirring parts. 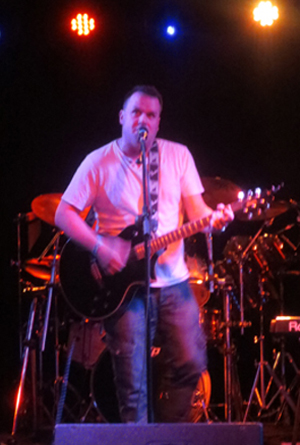 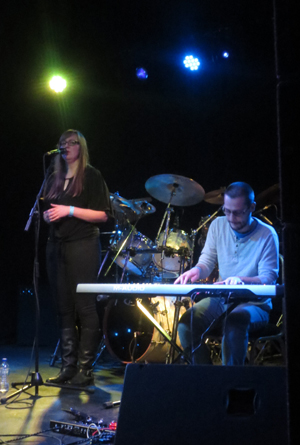 Bad Elephant artists are all prog, or prog ish, they have a manifesto, and for anyone interested it can be found Here. Next up, We Are Kin playing as an acoustic duo of Daniel Zambas on keyboards and the bands new singer Emma Brewin-Caddy. What an incredible voice, soulful, strong and controlled, like a combination of Billie Holiday and Adele (but without the flamboyance). The new song they performed, Exhale, really produced tingles, and although Emma does not appear on Pandora, their Bed Elephant debut, I acquired it wanting to hear more. This led to someone, remaining nameless, postulating on the release of a ‘Pandora Box set’ by We Are Kin, and it was a pun waiting to happen. From a mellow start the set built, laid foundations and finally topped out with Tides of Midnight. I think the next release will be interesting, and no, I don’t want a mug. We Are Kin appeared as a short notice replacement for Twice Bitten, a slipped disc I believe the reason for absence, and a speedy recovery is wished. I have not been able to substantiate the rumour of an incident involving a chandelier, a leather coat, flying helmet and a stick of celery, but maybe next time. We Are Kin did you proud TB.
  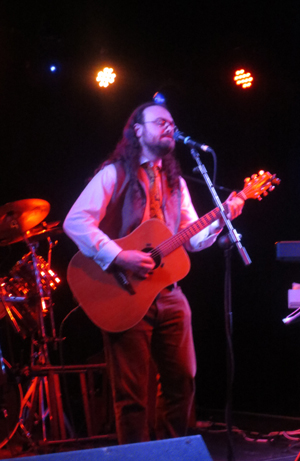 Third up, Tom Slatter. A very different acoustic set to that of jh. Laced with tales, dark humour and sardonic introductions, he went for it, he entertained and the small but enthusiastic audience appreciated. With material from Fit The Fourth he did win me over, that is not to say that I didn’t enjoy, more that I was not up to speed with Tom’s work. His titles, well the long ones, are almost stories in their own right, and the droll humour put to mind the musings of the late Jake Thackray, that’s in content not style. The effort put into this presentation deserved more support, in a city of seven and a half million souls it is a shame that there was not more than the 89 in attendance. Progressive music is having a renaissance, by going out and supporting these acts you help to promote their growth and continuing existence. So next time…please.
 
The Gift were the climax of the evening, covering both their rock orientated material and their softer side they were great. Like the Firebird Suite introduces Yes, The Gift use their I sing of Change, a spoken intro by Mike Morton’s late father, words that carry power as well as memories. The newly established six piece with Neil Hayman, the drummer from Konchordat, and the return of guitarist Leroy James plus new keyboard player Gabriele Baldocci, seemed much tighter than their still excellent set at 2015’s Summers End.

The Willows forms part of the set, a favourite of mine, along with others from the two albums, my enjoyment increasing on each occasion as I become more familiar with the band’s material. Performing numbers from Land of Shadows and the relaunched first album Awake & Dreaming, now featuring new packaging, artwork and Fountains Of Ash reinstated from the digital release, they rounded off the evening in style. The last two numbers were covers, Queen’s Seven Seas of Rye and David Bowie’s Starman, which brought a close to a great evening. The other band members should not go without mention, Stef Dickers on Bass, hiding at the back as is tradition, and David Lloyd on lead, played in the left handed style as all the best do (an element of bias may have crept in here). This is a happy band, a sense of craft is there from the music to the stage presence, even with the suspect jackets. This new version of The Gift promises an interesting future with their third album due later this year. 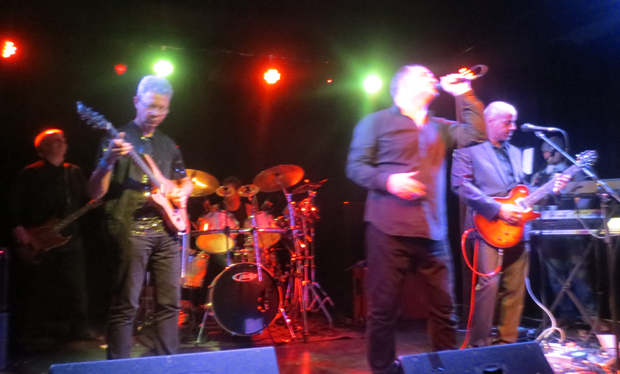 An excellent evening. Oh, and I got to meet Anthony Phillips, original guitarist and founder member of Genesis. He may have been responsible for the Pandora’s Box set pun.

SET LISTS
The Gift
I Sing Of Change (intro tape)
Too Many Hands (with the Road Runs On opening crescendo heralding it)
The Willow
You Are The Song
Walk Into The Water
Awake & Dreaming, Part 1
– Little Red Rooftops
– Dark Clouds Gathering
– The Carpeted Corridors
– Rooftops Revisited
Awake & Dreaming, Part 2
– Doubt
– Dance Of Denial
– Nocturne
– Word Of Mouth
– Heart
Awake & Dreaming, Part 3
– Escalation
– No One Came
– The Turning Of The Tide
– Awake and Dreaming
~ Encore:
Seven Seas Of Rye
Starman