Reunited with front man Daniel Tompkins and promoting their new album Polaris, TesseracT are coming to the end of the U.K. leg of an extensive tour which has already traversed North America before imminently heading off for a significant number of dates throughout Europe. Given the stature of a band like this, the choice of Oxford as a location along the way is possibly a little surprising but it is nevertheless pleasing to see an excellent and high-spirited turn out throughout the duration of the evening.

Support bands Nordic Giants (U.K.) and The Contortionist (U.S.) both play lively and powerful sets which garner warm and appreciative responses from the diverse (yet largely younger) crowd who are in attendance. By the time the lights dim a third time, there is a permeating atmosphere of eager readiness and welcoming excitement and, as TesseracT finally take to the stage, the positive buzz of anticipation is met with an outpouring of exuberance as the audience visibly compress and move as one toward the stage, arms held aloft in responsive salute. 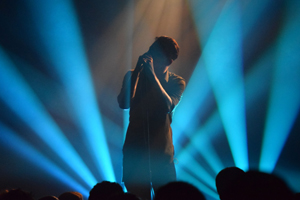 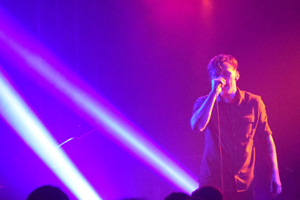 The opening song of the night is also one of the standout moments of the set. Taken from the new album, Phoenix is a scintillating testament to the new directions which the band are exploring. The floating, trance-like vocals of Tompkins mixed with the technical precision and controlled aggression of the band creates an emotive sound which is edgy, raw and to which you cannot help but respond. Heads vigorously nod, feet stomp, bodies sway and there is a general look of enthralled and slightly pained delight on faces across the room. 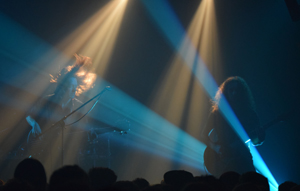 Before the applause has had time to reach its crescendo the band immediately launch into a second track from Polaris, the heavier, pulsating Messenger, driving, mesmerising rhythms pushing an irresistible, swirling wall of sound, which is in turn underpinned by a perfectly controlled and technically precise musical togetherness which effortlessly exudes passion and intensity.

The lack of narrative between songs is certainly a feature of the evening. There is, I suspect, a designed minimalism behind the sparse crowd interactions. They are not here to talk; the evening is an almost unbroken breathless performance, an emotionally charged and highly atmospheric flow of energy, creativity, mood and music all seamlessly blended and meticulously delivered. 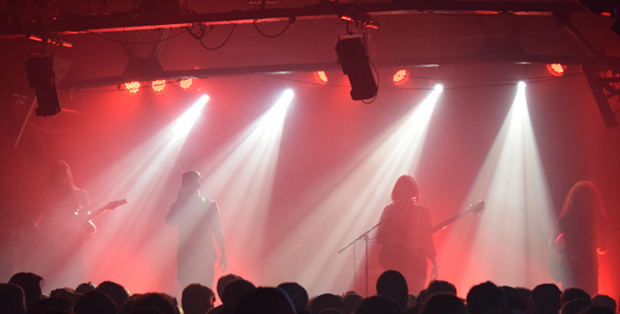 One of the frequent comments levelled at Polaris is the accentuation of the bass to the detriment of the other instruments. Whether it is the poor acoustics of the O2 or whether it is by design, the same could equally be said about the mix tonight. The bass (and bass drum) are over-amped, creating a ‘muddy’ sound which sometimes obscures the clarity of the other band members and frequently overpowers the spectacular vocal work of Tompkins, particularly in the quieter, more emotive moments. 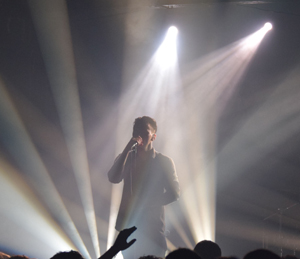 Similarly the lighting gives some small pause for thought. There is no denying that the light show is absolutely fantastic and hugely impressive, perfectly matching the swell and flow of the moods of the music. But whether by deliberate design in attempting to create an esoteric atmosphere or whether because of the limitations of a small stage, I don’t think there is a point during the evening where we actually ‘see’ the band! They always appear to be hiding in the shadows, silhouetted against banks of lighting pointing out toward the audience.

To be fair, none of this seems to bother the majority of those gathered at all. They are totally submersed in the force and power of the experience pouring from the stage like a musical waterfall, encompassing everyone and carrying them away on a wave of intense delight. And by the time we reach the climax of the evening with Of Mind – Nocturne and Acceptance we are not far from the formation of a mosh pit as glistening bodies judder energetically in happy abandon.

Whether it is because there have been three bands and we are pushing the curfew limit or not, I don’t know, but it is a smidge disappointing not to have an encore. The house lights come up and people gradually saunter away, happy but clearly exhausted with the evening’s exertions. In my review of Polaris I observed that they are a band who are rightly discovering their confidence to begin to explore genuinely innovative progressive directions with their music. On the basis of tonight’s performance, I think there should be tremendously genuine excitement about where they will go next and what they will choose to do.