The Devin Townsend Project arrives in London after eight weeks on the road supporting his latest studio album, Transcendence. Prior to tonight’s concert, however, Townsend has created an eager sense of expectation by announcing on Twitter that the London show will be an exclusive performance of his very first album (as Devin Townsend) Ocean Machine: Biomech in celebration of its 20th anniversary. As a result, doors open earlier than advertised and an exuberant audience have plenty of time to take their places. 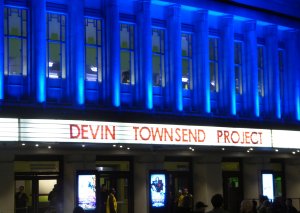 Leprous are first on stage to encouraging applause and immediately launch in to a pulsating, throbbing set full of commitment, passion and energy. It is also ridiculously loud and I, along with a fair few others, leave the auditorium such is the physical discomfort it is causing. On the way out an usher kindly gives me a packet of ear plugs; she is stationed in the stairwell, wearing a pair herself, but is reluctant to go any further inside because of the overwhelming sound levels.

Once a noticeable decrease in decibels indicates the end of the set, we return again to the field of battle. One of the interesting features of the evening is the oscillating waveform music being played between sets so as to create an ambient sense of atmosphere and continuity. It’s a nice idea which works well and adds to the sense of occasion as well as creating a vibrant buzz of excitement.

After a quick change-over, TesseracT take to the stage. I last saw them early in 2016 as they toured with their newly released album Polaris. They keep getting better and better and the set tonight is absolutely flawless. There is an explosive sense of rhythm, of penetrating drive and a powerful, unrelenting musical momentum which pulls you in and carries you along. There is little doubt they are destined for great things and what is particularly pleasing tonight is the excellent song selection from across all three albums allowing for a clear appreciation of the ways in which they are growing and evolving as a band. 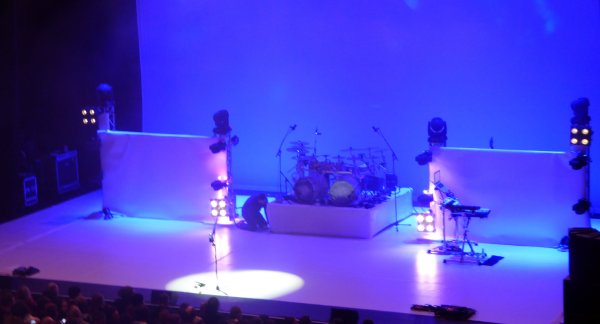 After another brief change-over, Devin Townsend arrives to rapturous adulation. It’s the penultimate night of the European leg of the tour and the stage is a clean white minimalist set up with only the drums raised on a platform. He casually meanders to the front of the stage, happily acknowledging the audience, whilst launching into a blistering rendition of Seventh Wave which positively exudes a menacing power and profound significance.

What follows is nothing short of a master class in studied intensity. Here is a man totally caught up in the meaning of the music and completely focused on dredging the emotional content of the moment, seamlessly bringing both to the fore in a performance which is utterly spell-binding.

Every now and then he seems to emerge from his all consuming reverie, almost as if to satisfy and assure himself that the audience are indeed still with him. During one such moment he does appear to be irritated at the way security teams are escorting crowd surfers away from the front, but such acknowledgements become fewer and further apart as he becomes increasingly enveloped by the demands of engaging with Ocean Machine. 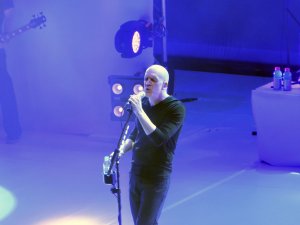 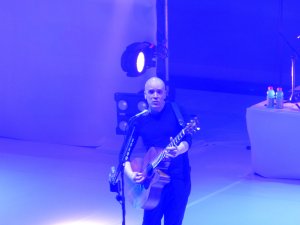 And the truth is, we are engaged with him. Watching him play, it is easy to feel the sheer effort of will which seems to spring from somewhere deep inside, inspiring him onwards with compelling energy and spirit. By the time we reach Thing Beyond Things there is a palpable sense of physical and emotional exhaustion from both sides – a hard fought journey we have been invited to travel together, happily accepted and with no regrets.

After the briefest of pauses, he returns again with three songs from Transcendence. There is no respite from the dogged tenacity and the sheer rigour of the performance. No quarter is given. The commitment to the music, to the playing, to the presentation of what it is all about is absolute and unwavering. That he has done this for the best part of eight weeks is staggering. 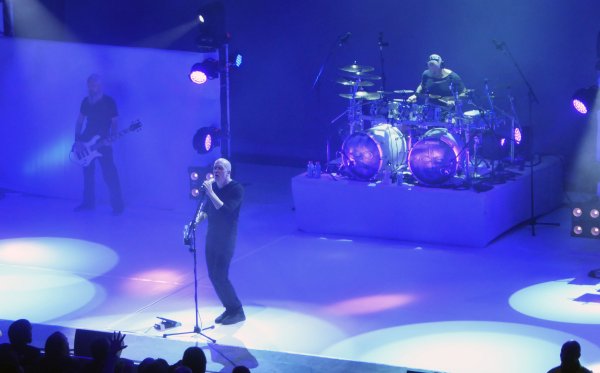 As the lights raise and the tumultuous applause begins to fade, the contrast between the first album and the most recent release are instructive. Transcendence leaves us with a sense of optimism, almost hope. The world maybe a dark, savage, ruthless place but there is beauty if you look and there are reasons to fight, to keep struggling, to keep on going in spite of and despite things always seemingly stacked permanently against us.

It’s a fitting way to end what has been a fascinating, draining and totally captivating evening.