Acapela Studio‘s rural setting in the village of Pentyrch’s 19th Century Capel Horeb, which is about as far out of Cardiff as you can be whilst still being, nominally at least, in Cardiff, is the perfect location for an up-close-and-personal performance by Stick Men, the tiny stage focusing the intensity as the audience surround the band on three sides. There’s fire and brimstone on display, but no preaching in a wonderfully good humoured and relaxed performance from players who should be (and often are) wowing audiences in much larger halls.

Between them, Chapman Stick legend Tony Levin and drummer Pat Mastelotto have CVs that seemingly go on forever, and with both in the current 16-legged line-up of the mighty King Crimson they’ll be back in the U.K. in the Autumn performing to baying hoards in some of the finest venues in the country, so this is a rare treat and in a very unusual setting with an audience of just a couple of hundred.

I knew it was going to be busy as parking spaces were at a premium, and with the pews of the venue filling up, many punters enjoying the pizza made on the premises, the scene was one of laid back expectation. I found a central spot in the balcony in front of the stage to enjoy a pint of Wye Valley Brewery’s finest while waiting for the off.

A little after 8, the trio emerge to a thunderous welcome. They could easily pass for science professors attending a symposium on artificial intelligence and it wouldn’t surprise me at all if they were familiar with the workings of the bunsen burner and whatnot, but as they prepare themselves and their instruments there is a feeling of intent in the air.

Tony and, perhaps to a slightly lesser extent, Pat are the main draws for this band, but that doesn’t do Markus Reuter the justice he deserves. The man is a titan, and all with a dignified calmness amongst the mayhem, pulling off Robert Fripp solos on his 8-string Touch Guitar with effortless ease. A formidable player indeed and even from his initial scene setting soundscape he is a man to watch.

And if there were a problem with Stick Men (which there isn’t) it would be that you need to watch all three of them all of the time. They really do need to be playing three sets per night so that you can enjoy the subtleties, interplay and power of each of them individually. There is just too much going on to soak it all up, you simply have to immerse yourself in the wealth of creative imagination and the dexterous ways in which the trio coax unexpected sounds out of the unusual instrumentation. Tony Levin is stage left, hunched over his 12-string Stick, performing sinuous runs, or adopting his trademark legs akimbo stance to beat out the deepest of resonant bass parts. Amazingly, Levin is now 71. 71!?! He really doesn’t look it, proof positive that music keeps you young, despite a punishing world wide schedule that he has now followed for many decades. Legends do not come bigger than this, the poster boy for the Chapman Stick since the early days after its invention and the catalyst for just about everyone who has ever picked the instrument up. He is a gift to the Stick, a man with the capabilities to demonstrate its full capacity, and what a remarkable instrument it can be in the right hands, Tony’s being the safest there are. On the other side of the stage, Reuter and his self-designed Touch Guitar. It has a different tone to the Stick, the two instruments complementing each other beautifully, the players swapping between ‘bass’ and ‘guitar’ parts at will with wonderful fluidity.

Behind them Pat Mastelotto. Over the years I have seen him play in a number of settings with a wide range of bands and he always has a wide-eyed enthusiasm for what he does which is completely infectious. You know he’d be doing it anyway just for the love of playing whether an audience turned up or not, and he is one of my favourite percussionists to watch. The word ‘drummer’ doesn’t paint the whole picture, the additional subtleties and electronic effects giving him a wide palette to choose from, allowing him to follow his muse wherever the mood takes him, and within Stick Men he has the perfect space to play, an environment that encourages improvisation and experimentation with the full support of his band mates.

After opening the show proper with Hide The Trees from the Deep album, Levin informs us that the hall sounds better than it did during soundcheck, and thanks us for absorbing all the vibrations! A pleasure, Sir! An early blast into the KC songbook gives us an incendiary Red, the multitudinous abilities of Stick and Touch covering the Wetton/Fripp parts with ease. Reuter introduces Schattenhaft, the first piece from last year’s Prog Noir from which later on we also get the bonkers Plutonium (with deadpan verses delivered by Reuter, group chanted chorus and interjections of Orff, Tchaikovsky and Yes) and beautifully angular Mantra, plus the thumping title track with a great vocal from Levin. Mastelotto comments that his glasses keep steaming up, but no worries as he can play with both sticks in one hand as he cleans them, and it’s nice that you get to hear from all three of the players, each able to give their own perspective on various pieces.

A brief intermission, during which a nice lady ventured to the balcony to sell proper desserts in proper glass dishes with proper spoons (none of your overpriced choc-ices or tubs with wooden “spoons” here!), and the second set opens with an unexpected delight from the KC catalogue as T-Lev beats out the unmistakable intro to Sartori In Tangier, a highlight from 1982’s Beat album and a touchstone of Stick lore. Swimming in T is an intriguing as yet unreleased number and then it’s back to Krimson with a piece that Reuter introduces as “composed in the same year as me, 1972” – Larks’ Tongues in Aspic, Part Two, thunderously delivered and shaking the old building to its foundation. Another perhaps unusual choice next in a cover of Mike Oldfield’s Mirage, from his QE2 album, Reuter introducing it with a memory of seeing Oldfield play in Berlin as a 10 year old.

To cap off the show, a spectacular Level 5 – probably more intense than King Crimson’s version – gave Mastelotto full rein on his electronic devices, and a finale of improvisation within Open, Pt.3 again allowed him to stretch out and try new things.

It’s an exhilarating performance that gets the response it deserves from an audience who have been completely enthralled from start to finish. And after all that the guys still have the time, inclination and humility to hang out in the bar for a chat afterwards.

Stick Men remain a band that you miss at you peril. 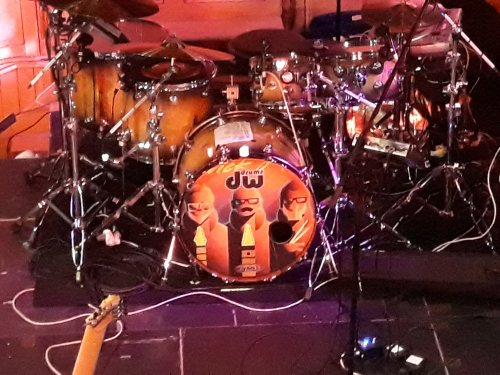 [Tony Levin has updated his Road Diary to cover the U.K. dates, you can see Tony’s photos and comments HERE.]