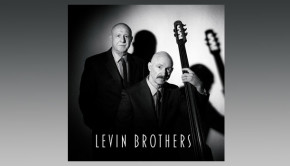 The phrase “no introduction necessary” is often over used but it surely applies to Tony Levin, probably the best known... Read More →