The phrase “no introduction necessary” is often over used but it surely applies to Tony Levin, probably the best known and hardest working bass player around. Despite being most familiar for his long associations with Peter Gabriel and King Crimson his discography covers an extraordinary amount of territory far beyond the prog and art rock he is best known for. I’ve heard him in numerous settings but never straight jazz before and here he plays mainly acoustic bass, also bringing out his cello which is a treat in itself. But this is an extra special release as it sees Tony in a duo format with older brother Pete Levin, another world renowned name as pianist and organist with such jazz luminaries as Miles Davis, Gil Evans, Jaco Pastorius and Wayne Shorter amongst many others. Having worked together on numerous occasions in the bands of others and their own individual projects, this is the first time that they have worked together as the core duo of a recording.

The material on this disc is all of the bright and breezy kind, a homage to the music of their youth. As Tony explains:-

“This album’s about a few things. It’s a long overdue ‘first record’ by two brothers who’ve been making records individually for… well, a lot of years! And it’s a return home, for me and Pete, to the music we first shared as kids – the ‘cool jazz’ of the 50’s. So it’s been a labor of love to write pieces in that style, woodshed my cello playing, so as to use it as a lead instrument, and put together a record with melody based songs, short solos, and, hopefully, the chemistry of musicians who play like… like brothers!”

It is perhaps surprising, given that the album is in large part a tribute to an era, that (bar one track that I’ll come to later) the pieces comprise newly written material but this is a massive bonus for the album as it becomes a unique take on the style and so in keeping with the ’50s period that they want to celebrate where the catchy melodies, deep grooves and tight solos made the music memorable. It wouldn’t be hard to convince anyone other than hard-bitten jazz aficionados that they are listening to standards of that era which is a huge credit to Pete and Tony and the experience they bring to this release. This is what Tony has to say about how they tried to get themselves in the right mindset in the studio:-

“You’ll see us in suits in the session photos – that was an effort to help be immersed in the genre of the music. Back in the 50’s, I guess everyone put on a suit and tie to go to work, even jazz players. It took awhile to get used to, but was actually kind of fun. Old school!”

As expected all of the pieces are played with supreme skill making for a hugely enjoyable listen, toe-tapping and witty with deft touches from all involved. It’s intimate and playful and you can hear what a good time they had recording it. The fireworks are of a lower-key sort than fans of Tony’s main works may be used to or expecting but that is no bad thing and you can’t help but wonder why he doesn’t do more of this. Probably only due to lack of time.

The acoustic tones are warm and satisfying with Tony’s bass and cello joining Pete’s organ and piano. Together with the additional talents of Jeff “Siege” Siegel and Steve Gadd (both drums), David Spinozza (guitar) and Eric Lawrence (sax) they produce a melodic and laid-back sound that evokes images of far off days.

Bassics kicks things off in grand style, there’s immediately a smile to proceedings and the Levins trade short and snappy bass and piano solos, supporting each other beautifully. The tone is clear from the start; they’re having fun but that doesn’t mean that they aren’t taking it seriously. This is music to put a spring in your step.

Brothers could (and should) be their theme tune, Pete deploying the organ this time with exquisite drum work and tasteful guitar accompaniment. It’s light without being throwaway, breezy without the fluff, and you can’t fault the skills or the choices made. Tony’s finger picking is a thing of wonder. Latin grooves inhabit Mysterioso, with slinky sax lead morphing into swing piano, and Havana where Pete’s organ adds a lovely tone. And is that Tony adding scat vocals?

The toe-tapping continues with Not So Square Dance which is as fun as it could be and it is clear that this isn’t just a vanity album to enable the brothers to kick back and have a laugh without having to work too hard. The effort that has gone into crafting these pieces and delivering them with shine and vitality speaks volumes for the efforts of these consummate professionals.

The variety continues. We get a Bebop style on Jumpin Jammies and Give Me Some Scratch, a more sentimental approach with I Remember which is beautifully rendered whilst the smoky late-night blues of When Sasha Gets The Blues lets Tony’s cello do the talking. The cello also appears on Special Delivery, a lovely sound when matched against the organ, the two lead voices harmonising beautifully.

This is as melodic and enjoyable a listen as you can get, the antidote to too much metallic-edged epics or furrow-browed muso noodling. The songs are short and to the point and gives the listener a fun experience without demanding too much from them. That is not to say that it is easy listening or background music – it isn’t.

I Got Your Bach is a lovely amalgam of styles, Tony’s bass providing a familiar lilting line while Pete’s organ provides the melody in perfect harmony. Ostropolya raises the tempo a notch or two, Tony’s acoustic bass playing a joy to hear and it is refreshing to hear more of this side of Tony’s playing across a whole disc.

The one cover on the album is King Crimson’s Matte Kudasai and this is a truly lovely version of a track that will no doubt be familiar to most people reading this. Here it is recast with Tony’s bass taking on the Belew vocal melody, a sweeping backdrop laid down on piano that lets the beauty of this piece shine anew. Pete steps up for a solo as the brothers switch roles as smoothly as if they’d been playing together for decades. Oh…

A long held dream of Pete and Tony is the release of the album in a vinyl LP version, limited to 1,000 copies on signed and numbered coloured vinyl. The Levins will also be autographing the first 1,000 CDs ordered on which you get two additional exclusive tracks, the snappy Brookline Boyz and the slinky blues of Fishy Takes A Walk.

I like jazz but am certainly no expert, having started with fusion and made tentative forays into what it developed from, and don’t have a real depth of knowledge on the genre as I haven’t spent enough time listening to the originals from the period that this release celebrates but this recording could well open the door to that world. For any fan of quality music played with real enthusiasm and passion by truly skilled artists you can’t ask for more and I’m really glad I’ve had the opportunity to review Levin Brothers.

I think Pete should have the final word:-

“Jazz musicians share a common trait; we’re standing on the shoulders of a long succession of players, going all the way back to Louis Armstrong. Their spirit is alive in the fabric of everything that we play. It’s only natural that, periodically, we want to revisit our roots.” 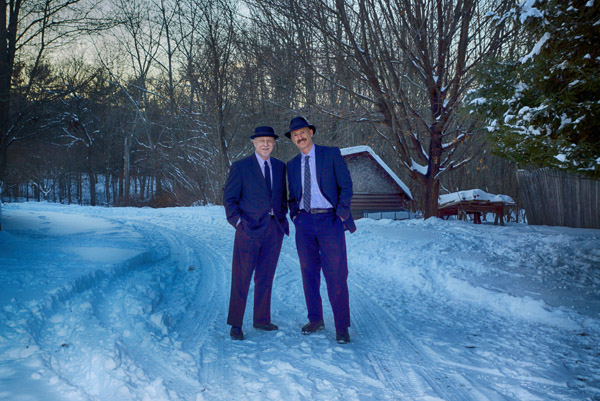