[…with the usual Crappy SnapsTM also by Jez Rowden with apologies to all concerned! Video with many thanks to Niek van Driel]

Five bands for ten quid? Good value indeed and Well worth the 375 mile round trip to get there, such were the exemplary talents on display from the 20 musicians playing this evening (if you count a double showing from Mr Mastelotto).

The recent releases from KoMaRa and O.R.k, both featuring the majestic percussive powerhouse that is Pat Mastelotto, current member of the King Crimson Frontline of Awesomeness and, after Fripp himself, currently the longest serving incumbent at The Court. These projects are a very different beast to KC but make a good fit within the avant garde experimentalism at which Pat excels; Stickmen, TU, HoBoLeMa, Mastica, BPMM, ToPaRaMa and more are all part of the alphabet soup of trailblazing of which the two projects on show tonight are fine examples.

But it wasn’t all about Pat. Every act on the bill delivered something different and worthy and made for a thrilling evening of boundary pushing that left those in attendance breathless and baying for more.

But back to the beginning. 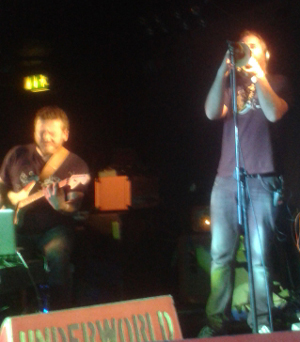 Arriving at the venue at 7 was a good move as KoMaRa were just readying themselves on stage in preparation for their short set. The trio of Mastelotto with Slovakian guitar and electronics whizz David Kollar and Italian trumpet maestro Paolo Raineri was simply thrilling. Watching Pat’s deft percussion and effects at close hand was mesmerising in itself but coupled with the rhythmic textures from Kollar – who on occasion used a violin bow to coax new sounds from his guitar – and Raineri’s sometimes plaintive/sometimes shrieking trumpet (often treated and distorted) the effect is intensely unsettling and disturbing yet always compelling. At times I was just lost in the moment, the sounds and pulses, rhythms and stark edges sweeping me away in a hypnotic weave. This is music to be heard in the present, at the point of creation on stage, and KoMaRa delivered beyond all expectations. 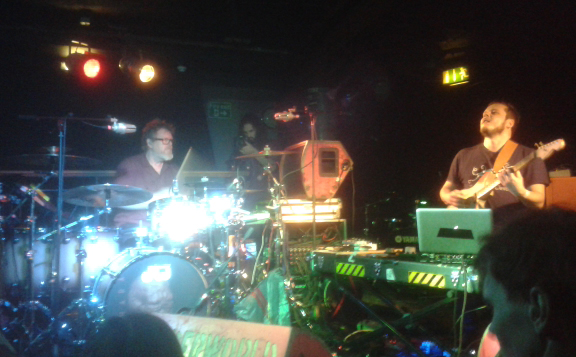 KoMaRa were clearly on first as a necessity given Pat’s dual role and their performance far outweighed their place in the running order, the half hour set being far too short – a necessity of the evening but a shame nonetheless as they could have played for much longer. Five tracks, one a version of TU’s Absint and they were gone all too soon.

It was always going to be a tall order fitting ALL THIS MUSIC into the short time before the 11pm curfew and for KoMaRa and Thumpermonkey in particular, the sets should have been longer, but on the flip, there was no possibility of getting bored as the styles changed throughout the evening as each band arrived to show us what they could do; no samey sets that go on too long tonight, the different approaches complementing each other beautifully and adding up to an event that brimmed over with wonderful music. 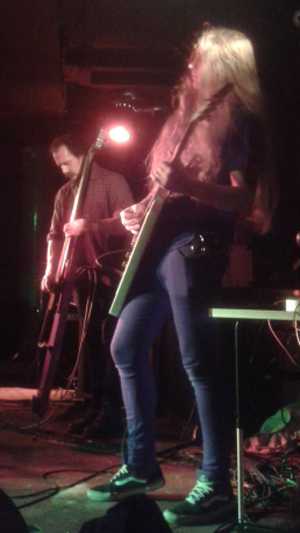 Second band up and a left turn into Quirk-Metal of the most entertaining order. I’d not previously heard The Earls of Mars (do you see what they did there?!) who arrived to beguile with they challenging and humorous music, Harry Armstrong’s front man antics engaging the crowd who clearly enjoyed what he was doing.

“All the mannerisms of Alex Harvey coupled with the insanity and menace of Charles Manson”, opined my friend Pete. I’d agree and add to that image a smidgeon of Viv Stanshall. The metal-edged guitar of Dan Hardingham (who often resembled Cousin It when hidden behind a wall of hair) took it all somewhere else and added a cut-throat edge but the upright bass (which reminds me, a visit to The Urban Dictionary is once again in order…) of Si McCarthy twanged away in fine order to balance things beautifully. The Swinger was introduced with “This is a song about taking the dog for a walk” – and maybe it was, suffice to say the tight musicianship and Harry’s madman persona kept everything ticking over nicely. Six songs, the result a fantastically entertaining set that kept me smiling from start to finish.

Forty percent in and after another brief turnaround we get London’s Landskap and four songs that featured a fine vocal performance of latter day Jim Morrison gruffness from Jake Harding. The rhythm section did some good work but overall I think the band lacked a little when compared to the others on the bill. The material is nice, atmospheric and brooding, but came across as a little pedestrian and lacking the experimental edge when compared to the other bands. On a different night I think they would have worked better for me but my mind had already been taken to a very different place and I’m afraid that Landskap didn’t really do it to me. I enjoyed the EP when I went to have a listen after the gig and will certainly visit them again upon the release of their forthcoming next album.

Thumpermonkey next, a band that thrilled at the Summer’s End festival in 2013. With a new album due for release this year they elected to play a short set of all new and as yet unreleased material, four songs in all, and immediately the quality of this band was apparent. The angular guitar of Michael Woodman and deft keys from Rael Jones probed and questioned while the rhythm from drummer Ben Wren and current Guapo bassist Sam Warren nailed everything down beautifully. The first half of the set had names, the second half didn’t but by the third number they were flying and Track 4 was a storming and wonderful thing of intense beauty. It’s very difficult to properly absorb new music like this in a live environment but I can’t wait to hear it in its finished form. 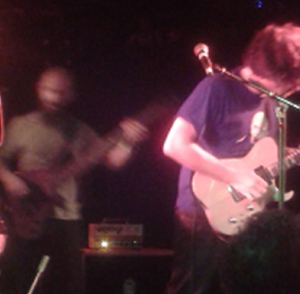 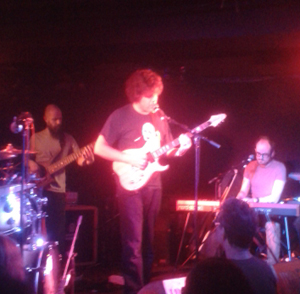 Finally, longest set of the evening and deservedly so for O.R.k, Pat again with help from Porcupine Tree’s Colin Edwin and his fretless bass together with their Italian colleagues, Carmelo Pipitone of Marta Sui Tubi (guitar) and Lef from Obake and Berserk! (vocals/keys/theremin and other assorted electronics). They put on a breathtaking set of muscle, melody, dexterity and subtlety, held together by Lef’s wonderful voice that at times crooned, growled and soared – often within the same song. He even deployed the neglected art of whistling during the likes of encore Pyre. 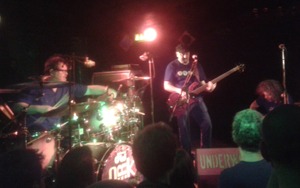 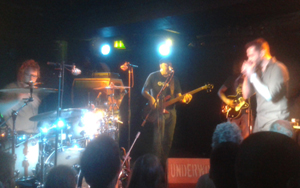 Pat and Colin work very well together on occasion the bottom end worked from the floor, up my spine and made my head shake to a quite worrying degree – marvellous! Pipitone’s guitar provided unexpected textures and flights of fancy whilst the additional recorded elements, often triggered by Pat’s drum pads, filled out the sound in cinematic style. This is a band that tick lots of boxes: the playing is superb, the music edgy and unsettling but also not difficult to appreciate and in Lef they have a fine frontman. I hope they continue to work together, as a unit they are something of a dream team and tonight’s performance was immense.

So a happy stroll back to the Tube and the long trip home. Back to the stats, with fewer than 130 hardy souls braving a, well, quite nice evening for February – that’s a measly 0.001% of the 8 million population of London who could have got there with ease – you have to ask, what does it actually take to sell these things out?